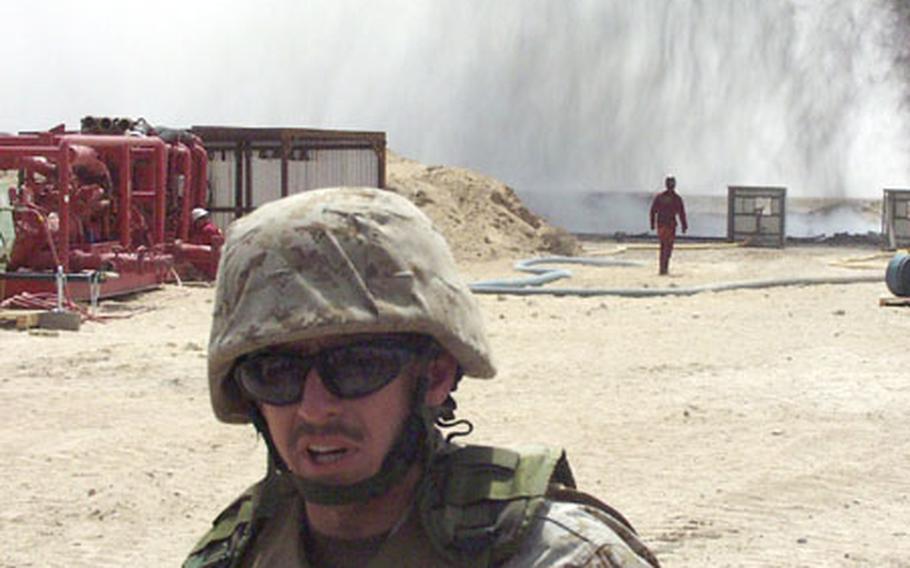 Marine Maj. Jorge Lizarralde is in charge of the Marine and Navy Explosive Ordnance Disposal Units that are working to secure the roughly 1,400 oil wells in southern Iraq. (David Josar / S&S)

Marine Maj. Jorge Lizarralde is in charge of the Marine and Navy Explosive Ordnance Disposal Units that are working to secure the roughly 1,400 oil wells in southern Iraq. (David Josar / S&S) 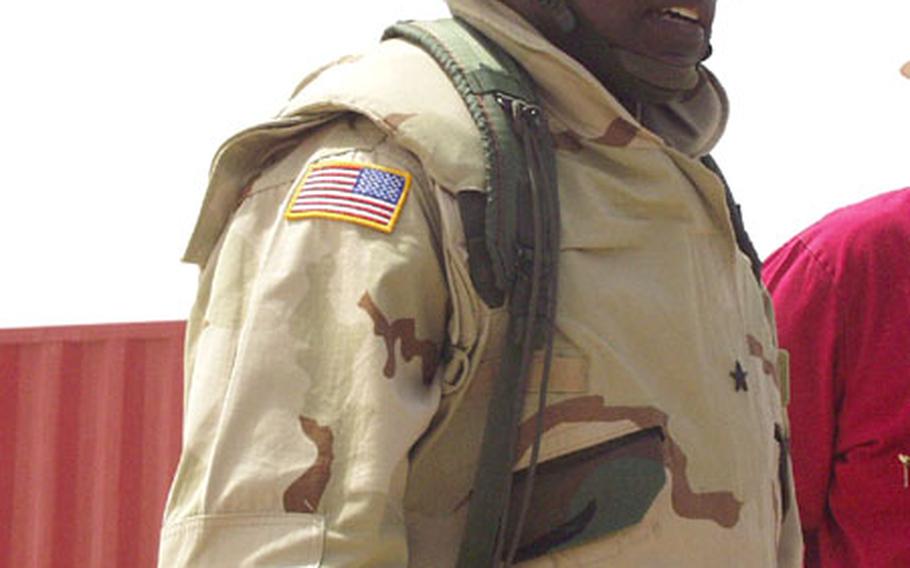 Army Brig. Gen. Robert Crear, commanding general of the U.S. Army Corps of Engineers, Southwestern Division, stands near a burning oil well that has nearly been extinguished. He said roughly 100 reservists have been activated to help with the effort. (David Josar / S&S) A National Guard unit activated from Denver provide security near oil fields that are being secured by coalition forces. (David Josar / S&S)

RUMAILA OIL FIELD, Iraq &#8212; Marine and Navy explosive ordnance disposal experts are continuing to ensure that roughly 1,400 oil wells in southern Iraq have not been rigged for explosives by fleeing Iraqi soldiers.

So far, EOD experts say they have found very few of the wells damaged or booby-trapped, despite ominous warnings from top U.S. officials that the oil fields, which will be crucial to providing funds for rebuilding Iraq, had been wired for destruction.

Lizarralde said no booby traps were found and only two wells were discovered with &#8220;fire wire and detonators.&#8221; For some reason, he said, the explosives were unsuccessful.

Coalition forces found just nine fires and only seven wells were ignited. The other two blazes were at small utility buildings.

On Saturday, just three wells were still been burning, and by the end of the day one of those was extinguished.

By comparison, the Iraqi military ignited 700 wells when fleeing Kuwait in 1991.

The EOD teams are moving in before the firefighting and engineering teams, Lizarralde said, and they also scan the area for any land mines. Lizarralde said his crews have found only a handful of mines, which were Italian- or Czech-made. He could not determine when they had been placed, he said.

Most of the soldiers are reservists who had their names culled from individuals who already were working in the oil industry, Crear said.

Troop numbers are expected to increase in coming weeks, he added.

Lizarralde and Crear said there have been no injuries as they have secured the oil fields, but one Marine was killed when coalition troops initially swept through the area and then continued to push through to the north.

The oil fields are visible from Kuwait across the demilitarized zone.

At times the fires, which are actually a burning mixture of oil and natural gas, take on a surreal appearance as the flames appear as twister-clouds and emit a sound comparable to fiercely blowing wind.

As EOD personnel, engineers and security forces provided by U.S and British forces watched the wells, hundreds of camels passed the searing heat and appeared unfazed.

Putting out the burning wells, said Brian Krause, who heads the firefighting effort, is relatively easy.

As the fire is put out with water, a geyser of oil spouts into the air, staining the surrounding sand. Then a dozen red-suited Boots & Coots workers use a long crane attached to a bulldozer to place a metal &#8220;stinger&#8221; into the well. The stinger is a tapered metal rod with a hole inside used to pump specially prepared mud to block the flow of oil.

The Rumaila field near the Kuwaiti border is one of Iraq&#8217;s largest, and military officials have said they hope to have it resume oil exports in three months.