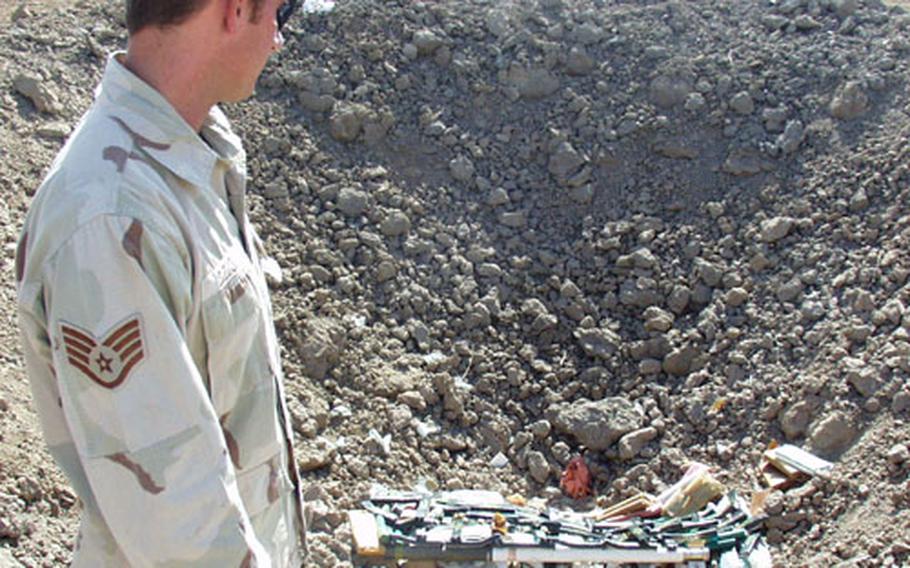 Air Force Staff Sgt. John Dziok looks at a pile of unexploded ordnance and explosives that he and other members of the Explosive Ordnance Disposal Team gathered together at Baghdad International Airport, shortly before detonating the pile. (Kent Harris / S&S)

Air Force Staff Sgt. John Dziok looks at a pile of unexploded ordnance and explosives that he and other members of the Explosive Ordnance Disposal Team gathered together at Baghdad International Airport, shortly before detonating the pile. (Kent Harris / S&S) 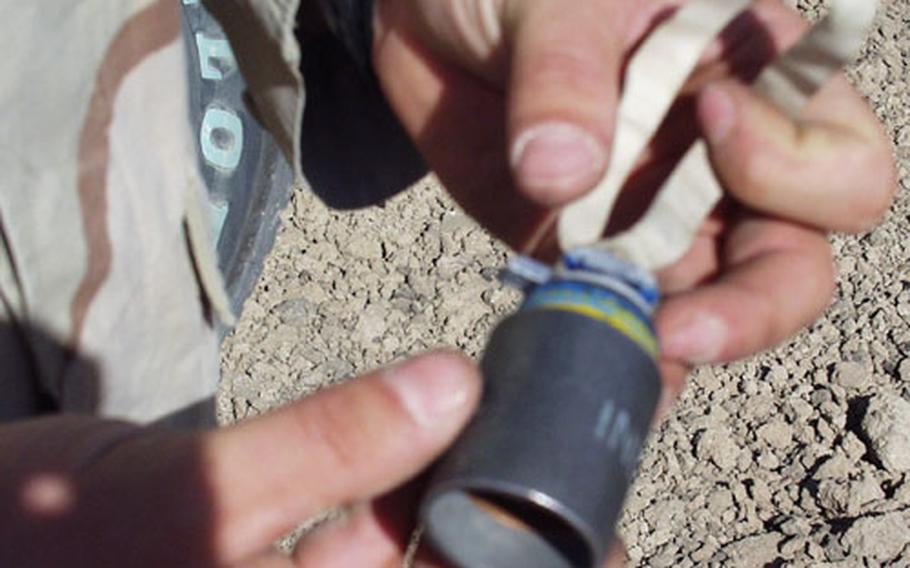 Hundreds of these bomblets were dropped in and around Baghdad International Airport during the American assault on the area. Some didn’t explode are still being found on and off the base. (Kent Harris / S&S) 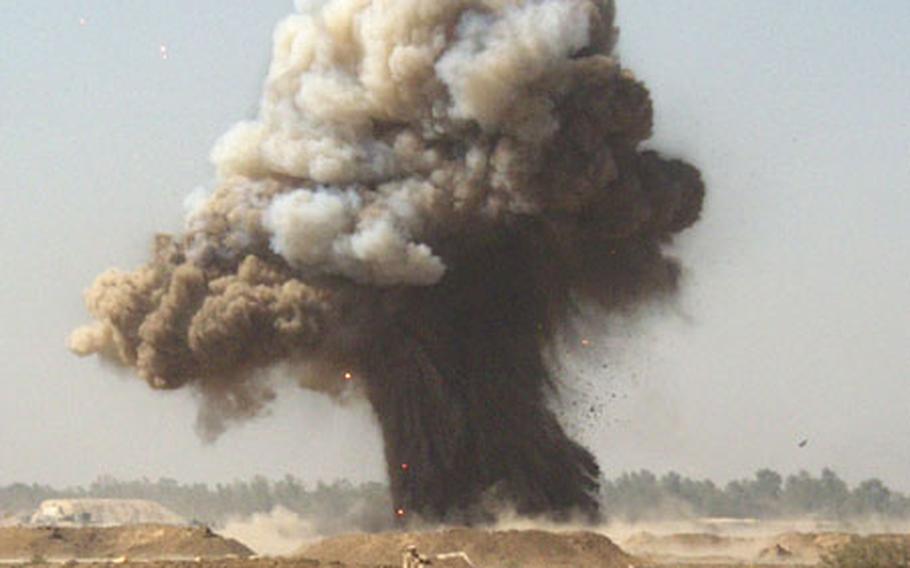 A plume of smoke marks the site where the Air Force’s Explosive Ordnance Disposal team blew up a small pile of explosives at Baghdad International Airport recently. (Kent Harris / S&S)

After a few of them, it&#8217;s not the ringing in the ears that&#8217;s most noticeable. Rather, it&#8217;s the nervous energy that makes anyone standing nearby jump at just about any sound.

&#8220;You get used to it after a while,&#8221; Air Force Staff Sgt. John Dziok said with a knowing smile after setting off one such explosion near a group of houses outside the walls of the Baghdad International Airport.

Dziok was a busy man Friday, detonating about a dozen explosions, each designed to get rid of at least one of the unexploded cluster bomblets that are seemingly everywhere in the fields near the air base where the Iraqi villagers farm and raise livestock.

It was the third trip that Master Sgt. Mo Mustafa&#8217;s explosive ordnance disposal, or EOD, team had made to the group of homes they call a village. To most Westerners, it&#8217;s more like a group of houses. There aren&#8217;t businesses nearby or any public buildings. Just white-walled houses surrounded by dusty fields. Many of those fields have trees that produce an applelike fruit in season. Sheep and cows roam among the trees, looking for lunch.

One of those cows, a local says, won&#8217;t be doing any more roaming. He tells Mustafa &#8212; the only American in the 10-member team who speaks Arabic &#8212; that the cow disturbed a cluster bomblet and blew up. Then he asks Mustafa for some money for it.

Mustafa seems to wear a lopsided grin through most of his visit to the site, partly because his Arabic is rusty and partly because he doesn&#8217;t have all the answers that the villagers want to hear.

That may be true regarding issues such as electricity and water. But Mustafa and his team are doing something to make the area safer. And the villagers seem to appreciate it. Each time the team visits, people come running. The children, who often get candy from the airmen, are among the first to arrive.

But the smiling adults aren&#8217;t far behind.

There seems to be a competition of sorts to point out all the newly discovered bomblets. The children have obviously been warned to stay far away from them, and all the sites are marked by sticks or pieces of fabric.

While Dziok prepares the timed charges that detonate the deadly devices, Mustafa and the rest of his crew make sure the locals are far from the explosion. Many of them appear to be as used to the blasts as Dziok is.

Mustafa says the group will return to the site as often as it needs to. And the airmen who follow them in the mission will most likely go to new sites around the area.

The Air Force&#8217;s first mission was to clear the runway and as much of the air base as it could. Mustafa said that when the team arrived, there were stacks of munitions piled everywhere, left behind by the defeated Iraqi forces. And the cluster bombs, dropped by the U.S. military during the assault on the air base, were scattered and hard to spot.

Some are still found on base, especially after heavy winds shift the dust that has covered them for a while. But Mustafa says he thinks most of them have been found, though he says venturing off into areas that are not frequently used is probably not a good idea.

The team still sets off a few explosions every day in craters near a deserted section of the base. It gathers unexploded munitions, rigs an explosive charge on top and detonates the pile. The resultant fireball and cloud turn more than a few heads, and rattle tents across the runway.

Clearing the base has allowed the Air Force team to help its Army brethren off the base. The Army handles the lion&#8217;s share of the EOD work around Baghdad, mostly because it has a lot more personnel on the job, but there have been several joint missions. The joint missions are possible, Mustafa said, because all military EOD teams go to the same school.

Still, for several of the junior airmen, Iraq is proving to be an advanced school, of sorts.

Not that the current crop is anything to complain about, Mustafa said. And that goes for both Army and Air Force.

In this case, that includes those Iraqi villagers, who are relied on to spot and flag all the bomblets they can.

During his efforts at the village, Dziok surveyed the broken and blackened ground left after one of his detonations.