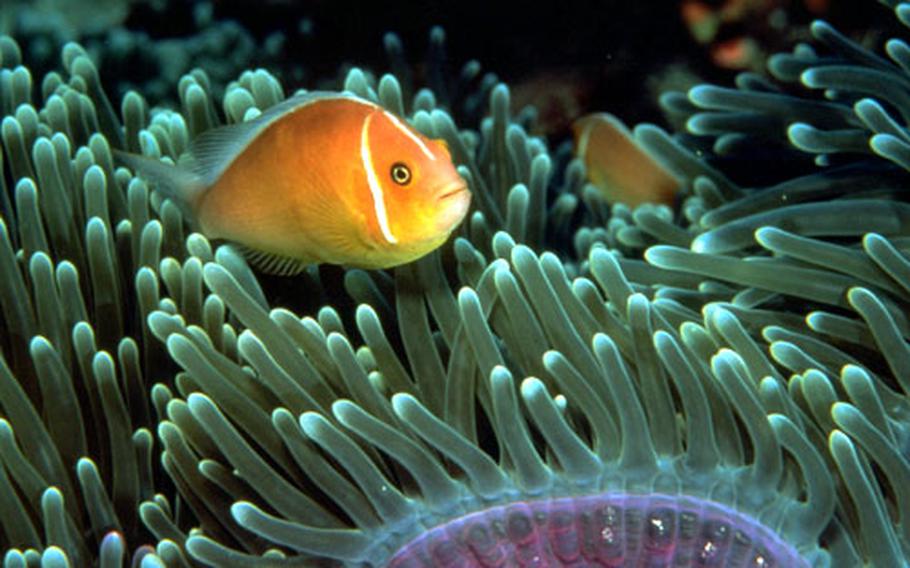 Tropical fish swim in a reef off the island. (Courtesy Guam Visitors Bureau)

CAMP FOSTER, Okinawa &mdash; Two key projects in the U.S. military buildup on Guam remain in limbo more than a year after they were first delayed due to environmental concerns.

In fact, the Navy now says a study into the effects of dredging on harbor coral to make room for aircraft carriers could take several years and may require artificial reefs or other protections, even though the service has already spent one year and $2.3 million on the project.

And, a year-old lawsuit by Guamanians hoping to halt Marine Corps training ranges from being built on ancient ancestral land may finally get an initial hearing next month in Hawaii district court, but even that is only an incremental step forward.

Both projects were to be finalized in September 2010 in the Navy&rsquo;s record of decision, a voluminous report on the environmental consequences of the planned buildup that was seen as a major step forward in the military effort. The Navy decided to put off the carrier berthing and training range projects as concerns over environmental damage grew among Guamanians and federal regulators.

As the two projects have lingered, the overall plan to transfer 8,600 Marines from Okinawa to Guam and turn the territory into an Air Force reconnaissance hub also hit a major delay in June when the U.S. and Japan abandoned a long-held 2014 completion date. So far, no new deadline has been set.

The buildup is also threatened by budget hawks in the U.S. Senate who have proposed a freeze on funding due to delays and deep opposition from Okinawa, where residents want more Marine Corps forces moved out of the prefecture.

The Navy has spent at least $2.3 million over the past year to research coral, fish, sponges and protected sea turtles after its plans to dredge Guam&rsquo;s main harbor to make way for U.S. aircraft carriers raised the eyebrows of federal agencies including the Environmental Protection Agency, the U.S. Fish and Wildlife Service and the National Marine Fisheries Service.

A complete study of the dredging and how to protect the Apra Harbor environment will likely take &ldquo;several years,&rdquo; Assistant Secretary of the Navy Jackalyne Pfannenstiel wrote in an Oct. 24 letter to the chairwoman of the Guam legislature&rsquo;s buildup committee, Sen. Judi Guthertz.

The Navy has completed initial field work in the harbor and will meet with federal regulators in Guam beginning this month to start discussing how the project might affect coral reefs and wildlife, according to Don Rochon, spokesman for Naval Facilities Engineering Command in Hawaii.

&ldquo;Once the impacts are identified, the resource agencies and Navy scientists must agree on the appropriate types of mitigation to compensate for the amount of coral resources lost,&rdquo; Rochon wrote.

He said a coral protection plan will be created and could include watershed restoration, planting mangroves and artificial reefs.

&ldquo;All of these actions will take time, of course, and we certainly don&rsquo;t know the specific date yet on when they will be completed,&rdquo; Rochon said.

According to Pfannenstiel, the Navy has also agreed to consider building carrier berthing on a nearby site to the west known as San Luis Beach, which has been suggested by Guamanian lawmakers and federal regulators as a less environmentally sensitive choice.

Meanwhile, a Hawaii district court is set to hear arguments Dec. 12 on whether to dismiss a legal challenge by Guamanians to Marine Corps firing ranges planned as part of the buildup, said Leevin Camacho, a spokesman for We Are Guahan, a citizens&rsquo; group that is a plaintiff in the case.

The military said new training areas on Guam are critical for the 8,600 Marines it plans to transfer to the island but proposals to put the live-fire rifle and grenade ranges on about 1,090 acres of coastal forest that contains native Chamorro archaeological ruins has caused public outcry, despite an agreement struck earlier this year with the Guam government to allow the project.

Camacho said the plaintiffs in the case, which also include the Guam Preservation Trust and the National Trust for Historic Preservation, are arguing that DOD did not do a thorough search before settling on several possible sites along the coastal area and should be forced to consider other land.

The Department of Justice, which is now handling the case, is asking the court to dismiss the case because the military has not made any final decision on where to put the ranges and may not make a decision soon, according to court documents.

Guthertz said the carrier berthing and the training ranges remain major concerns for the territory, despite widespread public support for increasing military forces.

&ldquo;Absolutely, these have been the two most contentious issues in the relocation of troops to Guam,&rdquo; she said.

Guthertz said she supports modifying both projects by relocating the carrier berthing to the west to San Luis Beach and building the new training ranges on existing Navy land. She said the changes would be a better solution for Guamanians but for now, it remains unclear what decisions the military will ultimately make.

The uncertainty and delays have begun to take a toll on the buildup effort, Guthertz said.

&ldquo;It is very obvious that the momentum has died,&rdquo; she said. &ldquo;I think [the buildup] is going to happen very, very slowly and on a much smaller scale &hellip; they are going to try to stretch it out.&rdquo;