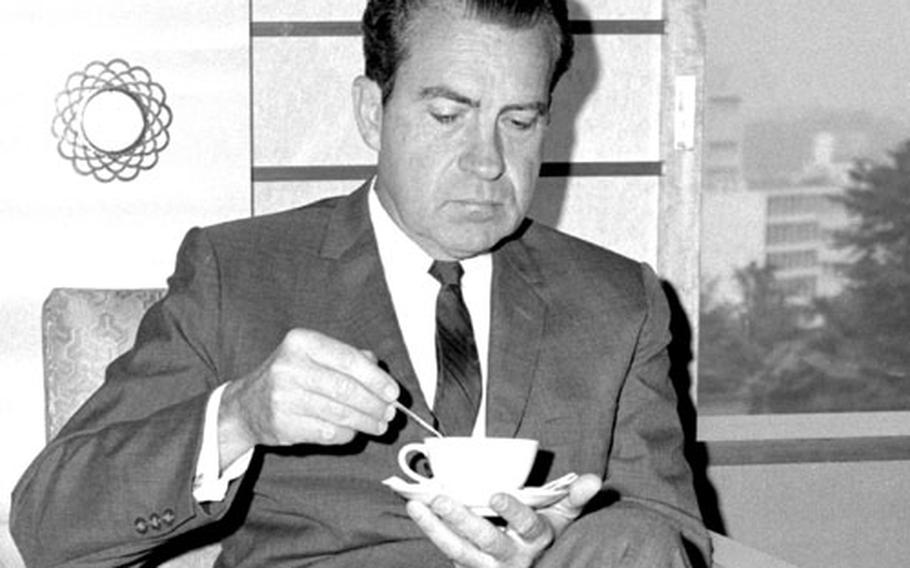 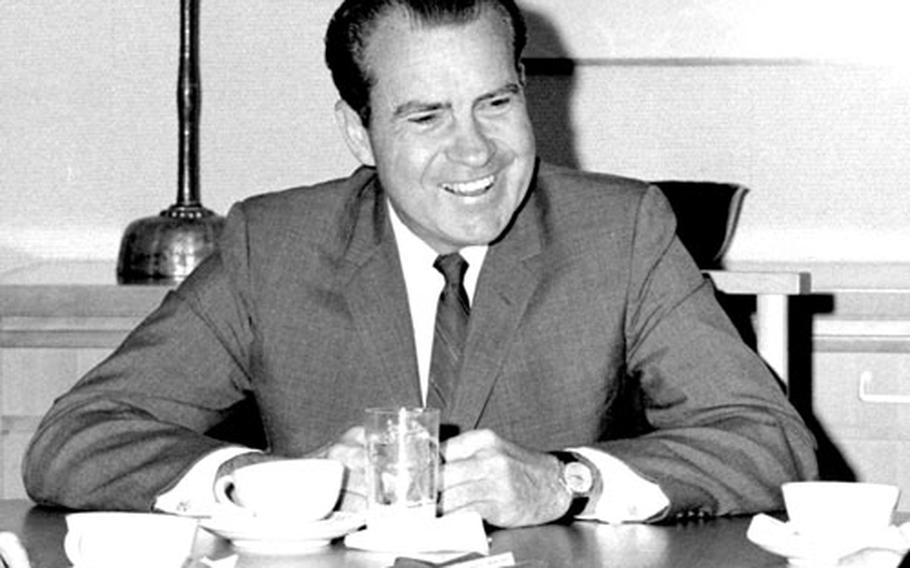 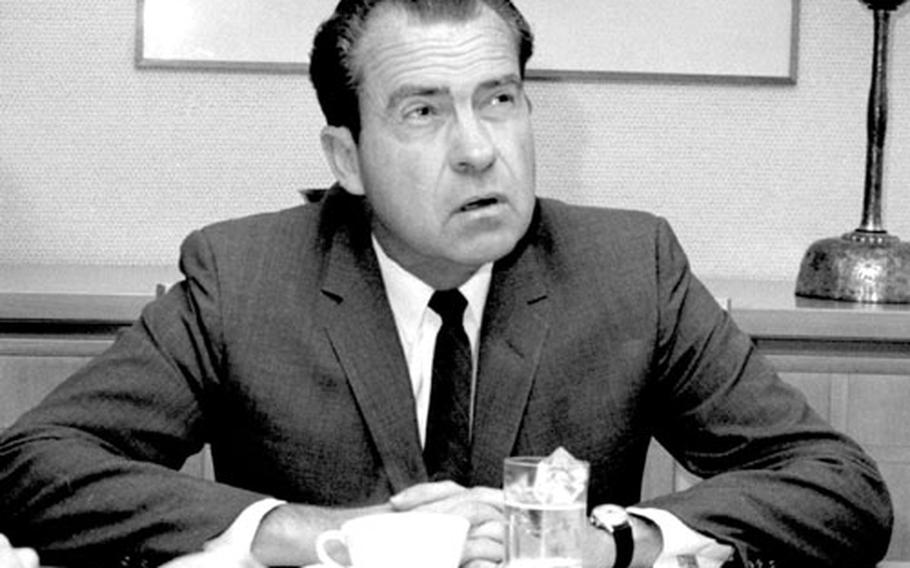 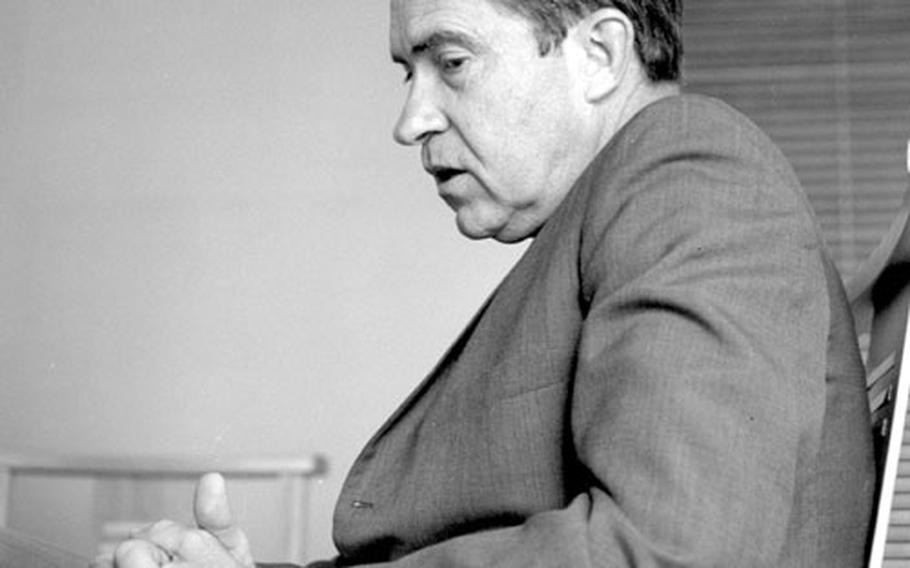 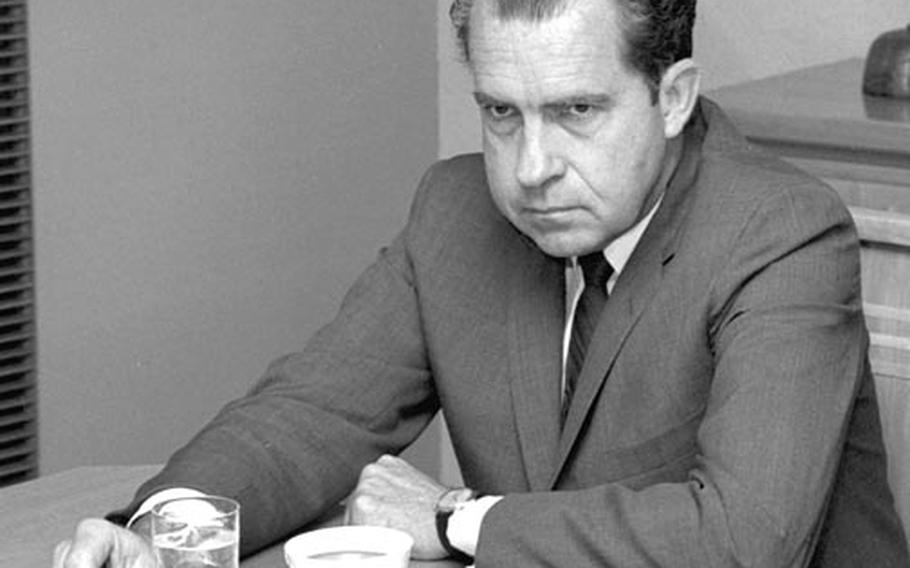 Former Vice President Richard M. Nixon meets with reporters in Tokyo during a business trip to several countries in the Far East. (Teruhiko Kikuchi/Stars and Stripes)

TOKYO &mdash; The target of communist aggression in Asia is not only Vietnam, but the entire Pacific &mdash; with Japan, "the most mature and wealthiest Far Eastern nation," as the true focal point, former vial president Richard M. Nixon said Saturday.

Nixon, here on a business trip, warned that ''communists must not be allowed to gain in landholdings, status, or in any other way. If they do, all American influence in the Pacific will crumble. Vietnam is the turning point. The U.S. cannot survive another defeat of any kind in the Far East," he said.

He said. "The communist target, as in Korea, is not primarily Vietnam, but all the Pacific &mdash; Japan specifically," adding, "Japan would have great difficulty surviving as an island of freedom in a Red takeover of Asian nations.

"For this reason," he said, "free Asian countries must take on increasing responsibilities in defending themselves, and Japan must play a major role.

"She, being the most mature and wealthiest Far Eastern nation, must spearhead the campaign for Asian unity," Nixon said.

Turning to the United Nations, Nixon said he doubted that the U.N. could propose an equitable peace in Vietnam because of what he termed "dominance of small neutral nations."

"No policies involving a confrontation between communism and the Free World should be decided by the U.N. because of this dominance," he said. "It s too dangerous."

Nixon said he personally "could not settle for a type of 'Laotian peace,' or any agreement which would impose on the Republic of Vietnam a coalition government or one of a neutralist status.

"The U.S. should be in favor of any peace which attains our goal &mdash; that is, defeat of the communists in Vietnam. The ideal peace for us is one that denies any gain for the aggressors. We cannot settle for anything less than a free Vietnam."

Nixon said that one of the greatest problems the U.S. is facing in Vietnam is that "most people &mdash; some Americans included &mdash; simply do riot understand what is happening in Vietnam.

"The opposers of U.S. policy in the States are small but relatively noisy groups. The very heavy majority stands firmly behind the Administration's actions," he said.

Nixon, who left here Saturday night for Taiwan, said he would meet with Chiang Kai-shek and with Henry Cabot Lodge in Saigon.

He said that although it would be difficult to predict the future in the Far East, "the U.S. will certainly be faced with a long-term commitment of troops and equipment unless greater emphasis is placed in Washington on Asian cooperation and self-defense against communism."

Nixon, who last visited the Far East in 1964, will also visit Hong Kong, Bangkok, and Kuala Lumpur, and, Canberra and Sydney in Australia, before; returning to Los Angeles.

He is representing several clients for his law firm.