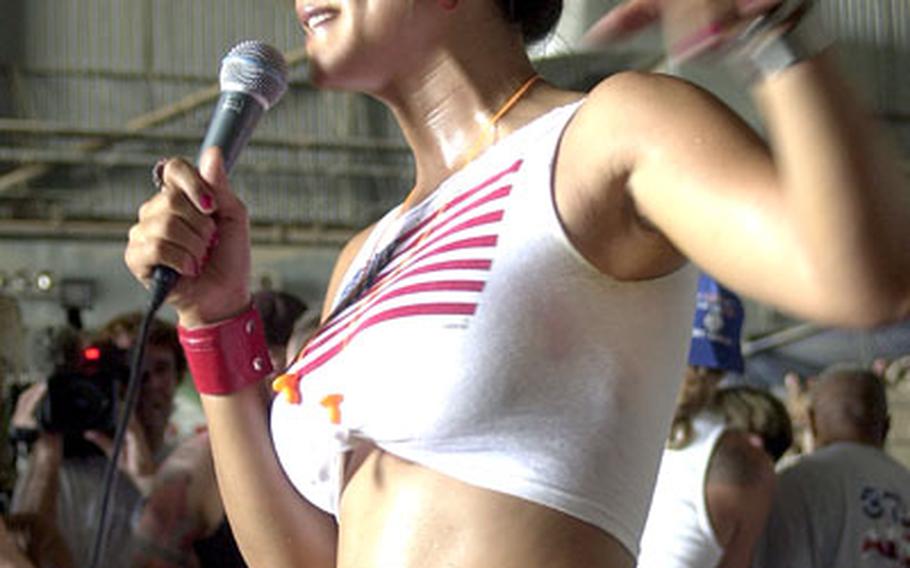 Model Leeann Tweeden entertains soldiers in Baghdad in this 2003 photo. Tweeden and others will visit troops Monday in Wiesbaden, Germany. (Michael Abrams / S&S)

Two comedians, an inspirational Hall of Fame football player and a former Playboy bunny will accompany Gen. Richard B. Myers, chairman of the Joint Chiefs of Staff, on a trip to Wiesbaden, Germany, on Monday to visit 1st Armored Division troops.

They will speak Monday morning in a hanger on the base&#8217;s airstrip. The 1st Armored Division did not release the time of the event.

Quinn toured bases in Japan in May 2004 with two other comedians. He hosts his own talk-show-format show on Comedy Central called &#8220;Tough Crowd with Colin Quinn.&#8221;

Sayers became the youngest member of the National Football League Hall of Fame when he was 34 years old. He battled back from a career-threatening knee injury and went on to write a popular autobiography, &#8220;I Am Third,&#8221; that was adapted to the made-for-television movie &#8220;Brian&#8217;s Song.&#8221;

Tweeden is a former Frederick&#8217;s of Hollywood lingerie model who appeared on the cover of the August 1996 issue of Playboy magazine. She has visited troops in Iraq three times.