Children&#39;s entertainer Dan Crow, who has made 10 CDs of his music, is about to start a tour of U.S. military installations in Europe. (Charlie Coon / S&S)

Children&#39;s entertainer Dan Crow, who has made 10 CDs of his music, is about to start a tour of U.S. military installations in Europe. (Charlie Coon / S&S) 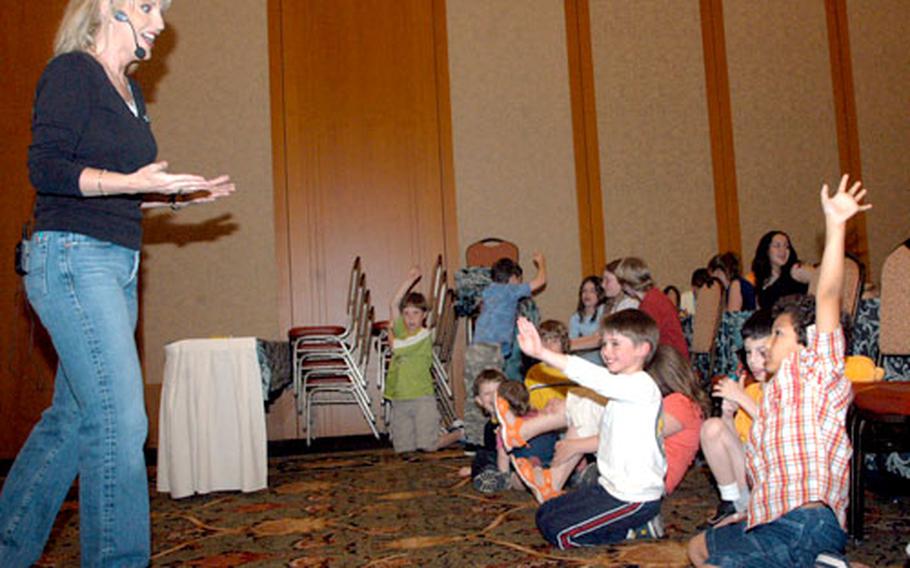 “Mrs. B,” also known as Carri Blake-Brekke, entertains children on Monday in Garmisch, Germany, with a show that combines singing, storytelling and puppets. Next week, she begins a tour of DODDS schools in Europe. (Charlie Coon / S&S)

GARMISCH, Germany &#8212; Coming to a school near you, maybe, is a woman with four grown children and a man who has none at all, but who both live to entertain youngsters.

Carri Blake-Brekke, whose stage name is Mrs. B, and Dan Crow have recorded 13 music CDs between them. Coincidentally, the two are about to embark on separate tours of Department of Defense Dependents Schools in Europe.

The two say they&#8217;ve found a welcoming audience in military kids and their teachers.

Blake-Brekke, of Peoria, Ariz., is a singer, actor, puppeteer and comedian, and is relatively new at performing overseas.

On the other hand, Crow, 59, is a veteran troubadour to the young. The Palm Springs, Calif., resident was a Disney songwriter for 12 years for the company&#8217;s movie and education groups. This will be Crow&#8217;s 10th year singing at DODDS-Europe schools.

Both entertainers appeared this week at the European PTA conference in Garmisch, Germany. Some of the teachers said that Blake-Brekke&#8217;s and Crow&#8217;s acts help to entertain their pupils and teach them basic skills.

Crow has recorded 10 CDs on his own and performs year round for pupils of different ages.

Blake-Brekke has made five children&#8217;s books and three CDs, but she&#8217;s got a bigger goal: Playing at Madison Square Garden in New York City. She figures that if The Wiggles, an Australian act that targets toddlers, can sell out 12 shows at the Garden, and if Britney Spears can capture the teen crowd, why couldn&#8217;t Mrs. B own the post-toddler, preteen audience?