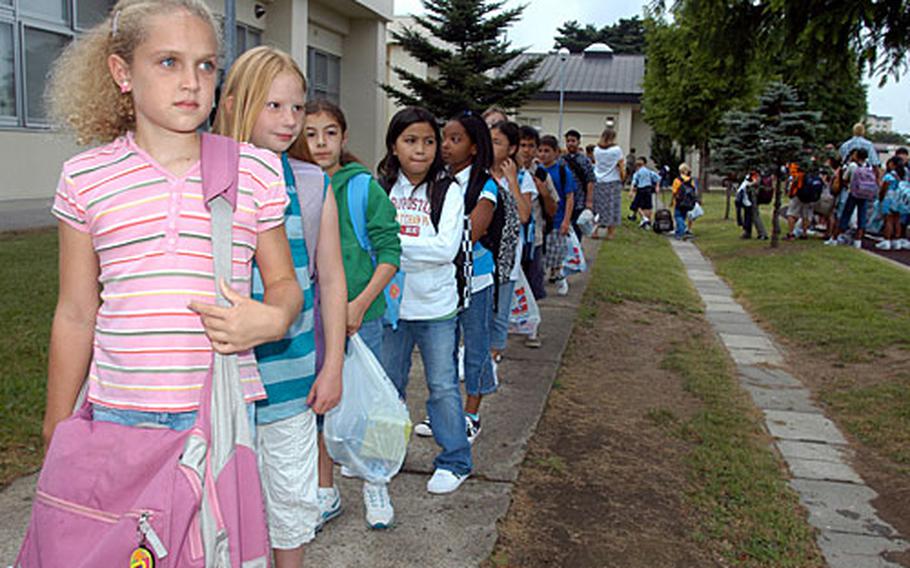 Fifth-grader Lindsay Turvold and her classmates line up outside Sollars Elementary School at Misawa Air Base, Japan, on Aug. 27, the first day of school. Both of Misawa&#39;s elementary schools saw their enrollment decline this school year, echoing a trend at DODDS schools across Japan and Okinawa. (Jennifer H. Svan / S&S)

Where have all the children gone?

Enrollment in military base schools across Japan and Okinawa has declined significantly the past three years, but officials say it&#8217;s difficult to pin down a leading cause.

But officials cite several contributing factors, from shrinking base populations, deployments keeping families home instead of coming overseas, and many children on Pacific bases too young to be in school.

Home schooling and off-base schools, such as religious and international schools, also siphon off a small number of students.

Chip Steitz, a DODDS-Pacific spokesman on Okinawa, deferred to U.S. Forces Japan when asked about the dwindling numbers. &#8220;I am not going to speculate on the reasons why student enrollment has declined,&#8221; he wrote in an e-mail to Stars and Stripes.

Last year, USFJ adopted an instruction requiring all services and agencies to account for where children attend school, whether it&#8217;s on or off base or in the home. According to the regulation, information would be used to assist in planning, programming and budgeting.

But Marine Corps Master Sgt. Terence Peck, a USFJ spokesman, said the 2006-07 data is incomplete because of disparities in the way it was submitted. Officials have discussed better collection methods, he added. New reports are due Feb. 15.

Shirley Rogers, school liaison officer for the 374th Mission Support Group at Yokota Air Base, said waning DODDS enrollment can be linked to a &#8220;combination of several different factors.&#8221;

&#8220;And today, there&#8217;s a lot more deployments from overseas bases, so families are choosing to stay home with the children while the active-duty member deploys. That happens.&#8221;

The downturn has been sharp at Yokota High School, where enrollment is off roughly 25 percent since September 2004, falling from about 430 students to 315 now, said principal Richard Schlueter.

Schlueter said teachers have been trimmed from Yokota&#8217;s faculty as enrollment has decreased.

Rogers could not provide statistics due to the problems with last year&#8217;s count but said the percentage of Yokota children being home-schooled or enrolled in an off-base private institution is &#8220;real, real low.&#8221;

Yokota Christian Academy, which is operated by the off-base Yokota Baptist Church, has a student body of about 25. The numbers have remained steady in the past four years, and Pastor Warren D. Webster said he knows of few parents who home-school their children.

At Cummings Elementary School on Misawa Air Base, Japan, principal John Williams has seen enrollment drop by nearly half since 2000, his first year at the school.

Enrollment then, including preschool students in Sure Start through sixth grade, was 550.

Williams has no explanation for the drastic decline.

&#8220;Units are being renovated here in the north area, and those families sometimes move down to main base, but actually Sollars (enrollment) has declined, too, considerably in those years, so I have no idea,&#8221; he said, referring to Sollars Elementary School on main base.

He said the Navy cutting back on multiple, consecutive overseas tours by servicemembers could be one. Enrollment also fluctuates with the housing supply at Sasebo, he added.

Meanwhile, at Sasebo Elementary School on the main base area, student enrollment has increased the past two years, said Nicole Flores, the school&#8217;s guidance counselor.

&#8220;We are the little school who kept on growing&#8221; though enrollment now is beginning to stabilize, Flores said.