Enlisted soldiers at highest risk of suicide soon after joining 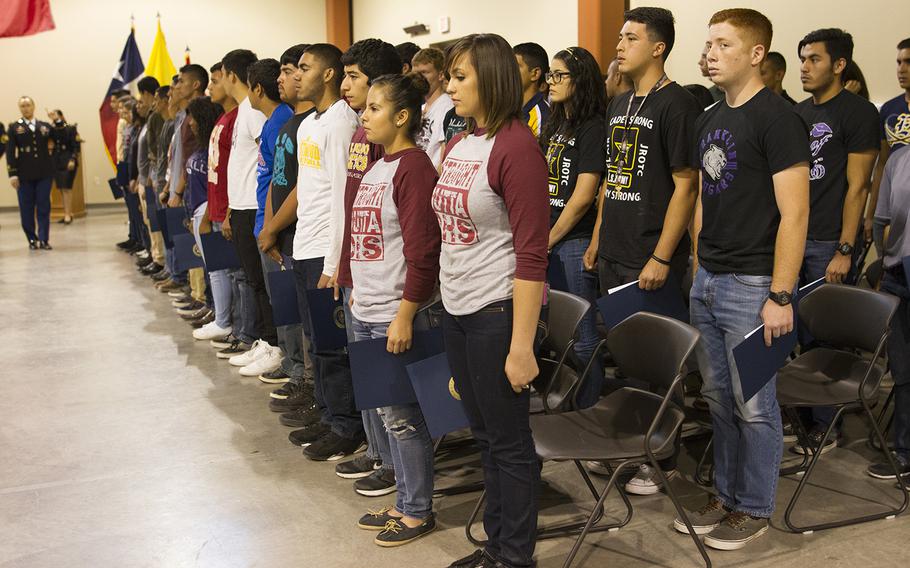 A high school award ceremony was held at the 83rd Military Police Company in El Paso, Texas on May 21, 2016 to recognize over 80 high school seniors for their decision to join the Army after graduation. Active-duty enlisted soldiers were at greatest risk of attempting suicide two months after joining up, according to a recent study of nearly 10,000 soldiers who made suicide attempts between 2004 and 2009. (Stephanie Ramirez/U.S. Army)

Active-duty enlisted soldiers were at greatest risk of attempting suicide two months after joining up, according to a recent study of nearly 10,000 soldiers who made suicide attempts between 2004 and 2009.

The study, published in May by JAMA Psychiatry as part of a joint project of the National Institutes of Health and the Defense Department, also found that the majority of the Army’s 9,650 troops who made a suicide attempt over those years, as documented in medical records, had never deployed. The never-deployed troops comprised 40 percent of 153,528 soldiers on active duty in that period but 61 percent of those who attempted suicide.

The study was unusual in that it looked at suicide attempts rather than completed suicides, said Dr. Robert Ursano, the study’s lead author and director of the Center for the Study of Traumatic Stress at the Uniformed Services University of the Health Sciences, in Bethesda, Md.

Previously deployed soldiers comprised about 29 percent of the total who attempted suicide, the study found. Those who were deployed at the time of their attempt comprised just under 10 percent. For those, the risk for a suicide attempt increased a few months after coming home and halfway through the deployment, respectively, the study showed.

Identifying the risky times provides “opportunities for intervening at those times,” Ursano said.

Peaks in attempts at certain times likely show common stress points, according to the study. The second month of service — with a rate of 103 attempted suicides per 100,000 “person-months” — is “a stressful time during basic training and Army acculturation,” the study says. “Whether this risk pattern was associated with expanded Army recruitment during war or anticipated deployments or is a persistent pattern of risk among soldiers in training remains to be determined.”

The study found that for “currently deployed” soldiers, there was an attempt spike at the halfway point, when soldiers often take leave. The attempted suicide rate in that grouping was 25 per 100,000 person-months.

Five months after a deployment’s end, the rate of attempted suicide rate was 40 per 100,000. “Difficulties with post-deployment readjustment are well documented,” the study says, pointing to previous research showing more emotional difficulties manifesting themselves three to six months after soldiers return from deployment. “This is further supported by our finding that soldiers who screened positive for depression or (post-traumatic stress disorder) during the later assessment had higher risk than those with a negative screen and those with an early positive screen only,” the study said.

Ursano said the findings showed that mental health screening is useful in predicting — and potentially mitigating — risk. But most important he said, is “the more recent (a mental health diagnosis), the greater the risk.”

The study is the latest of some 30 published research papers under the auspices of the Army Study to Assess Risk and Resilience in Servicemembers, or STARRS, which began in 2009. Ursano said the longitudinal study of a vast group of soldiers intended to unravel the complexity of suicidology — “the anatomy and physiology” — much in the same manner that the ongoing Framingham Heart Study, begun in 1948, identified high blood pressure and cholesterol as causative in cardiac deaths, not a normal part of aging.

A goal is to learn about transitions from a suicidal thought all the way to a death. “What gets one from making an attempt to a completed suicide?” Ursano said.

Of those who attempted suicide, about 86 percent were male, 68 percent were younger than 30 years old, 60 percent were white, and more than half were married, according to the study, titled “Risk Factors, Methods, and Timing of Suicide Attempts Among U.S. Army Soldiers”.

The STARRS project was initiated after military suicide rates, which had been historically lower than civilian rates, doubled between 2004 and 2009.