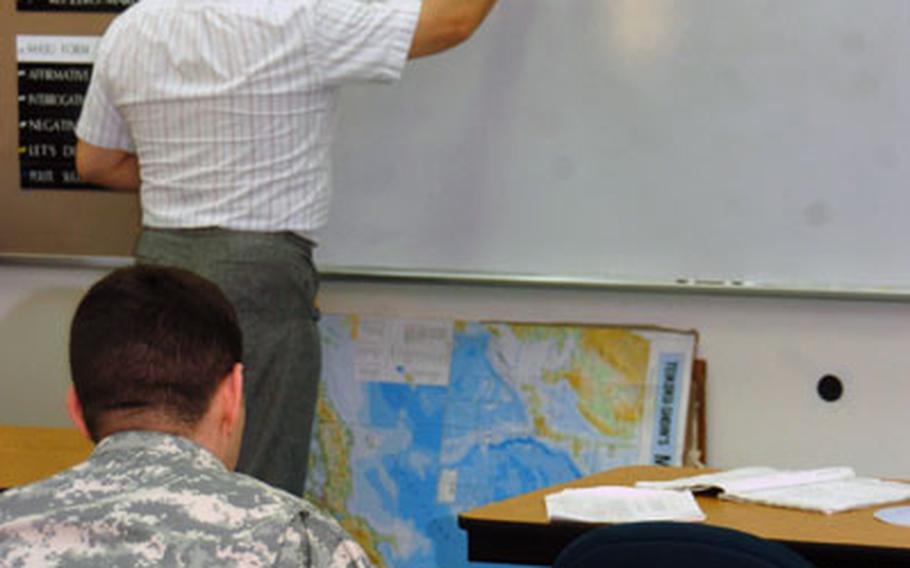 Language teacher Misuo Onozaki teaches Japanese to soldiers at the army education center on Tuesday at Camp Zama, Japan. Military service members can use foreign languages they use as credits for degrees. (Christopher B. Stoltz / S&S)

KADENA AIR BASE, Okinawa &#8212; A college education can boost an enlisted military career, and the sooner one starts, the better, say some Pacific-based servicemembers working on college degrees.

There&#8217;s never been a better time than now, as the military is providing 100 percent tuition assistance, said Marine Master Sgt. Edward Marotske, who&#8217;s one course away from earning his bachelor&#8217;s degree.

After high school, Marotske &#8212; of the Special Operations Training Group at Camp Hansen &#8212; had no desire to attend college. Nor did he have much interest in a university education after he joined the Corps.

Even though junior Marines receive points toward promotion for college courses they complete, Marotske recounted that as a young Marine he was focused on infantry duties, not college studies. He said he didn&#8217;t start taking college classes until they were offered during a deployment.

The Corps has come a long way when it comes to encouraging enlisted Marines to seek more education, Marotske said. And so has he.

As an enlisted leader, Marotske said, he pushes his junior Marines to embrace education and take advantage of such military service benefits as college tuition assistance.

&#8220;We get weekly e-mails sent out by one of the chiefs, soliciting crewmembers to sign up and earn their degrees,&#8221; Fansler said.

All the military service branches emphasize education now more than ever, 22-year Corps veteran Marotske said. But in his opinion, the service that excels in promoting off-duty education is the Air Force, he said

Air Force Master Sgt. Thomas Stiles agreed. He said his supervisors have always helped him in his pursuit of a degree, and he just completed the last class in his program for a bachelor&#8217;s degree in business.

Stiles, of 18th Dental Battalion on Kadena Air Base, attended Plattsburgh State University of New York after high school. But after a semester and a half, he no longer could afford to attend, so he joined the Air Force in 1993 for such educational benefits as the Montgomery GI Bill.

Stiles wants his children to go to college, and he wanted to set the example.

In the Stiles household, the example has been set.

Education is of interest to servicemembers in South Korea, too. Troops at U.S. Army Garrison-Red Cloud, for example, said a limited roster of classes are offered at the three education centers in their area, but for a more extensive course schedule, they have to take an hourlong bus trip &#8212; as they aren&#8217;t allowed personal vehicles &#8212; to the larger Yongsan Garrison in Seoul.

&#8220;I would go to Yongsan if I absolutely needed to,&#8221; said Army Pfc. Randy White, who is based at Camp Red Cloud. That&#8217;s not a problem right now, White said, because his general education courses are available in his area.

White plans to extend another year in South Korea. He said that since his unit doesn&#8217;t deploy, he has a better opportunity to continue his studies.

Early in his career and not supporting a family, White is at the perfect point in his life to pursue a degree, both Marotske and Stiles said.

But family and work responsibilities should not stop anyone from attending classes, Marotske said.

With tuition assistance, the availability of online courses and the options offered at installation education sites, there&#8217;s no excuse not to get a degree, he said.

Stars and Stripes reporters Chris Fowler and Erik Slavin contributed to this report.

OKINAWA &#8212; Some servicemembers join the military with no plans to attend college &#8212; only to change their minds later.

Others join specifically for the education benefits.

&#8220;A good place to start is an installation&#8217;s education office,&#8221; said Air Force Master Sgt. Thomas Stiles, of Kadena Air Base, who recently finished his last class for a business administration bachelor&#8217;s degree.

The hardest step is taking that first class, said Bob Stenard, the supervisory guidance counselor at the Life-Long Learning Center on Camp Foster.

Both Stenard and Chestnut advised that students attempt only one class at a time to begin with.

Online classes can be fit into hectic schedules, even if a servicemember is deployed to a war zone. And they&#8217;re not limited to a certain time of the day or week, Chestnut said.

However, online classes aren&#8217;t for everyone, she cautioned.