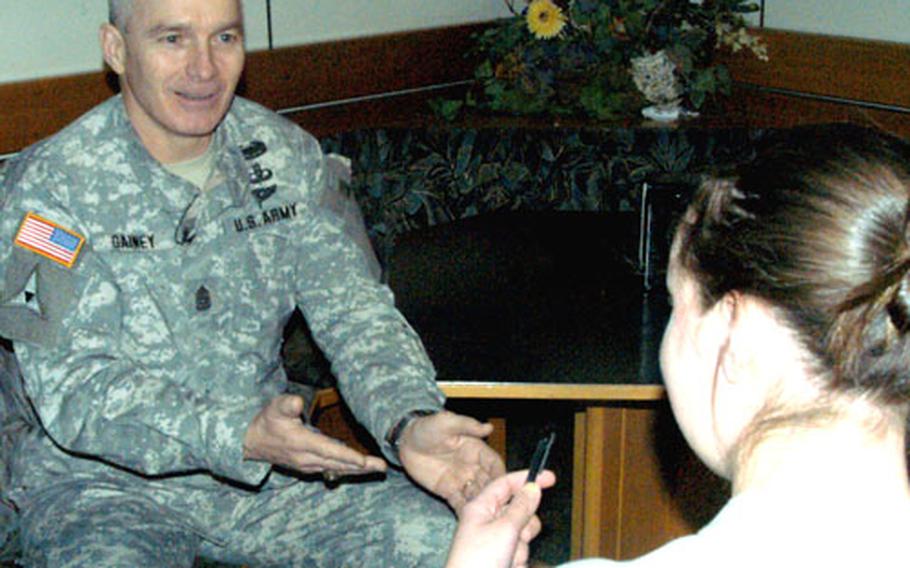 Sgt. Maj. William J. Gainey, senior enlisted adviser to the Joint Chiefs of Staff since October, has been touring the world trying to promote a spirit of compatibility between soldiers, sailors, airmen, Marines and Coast Guardsmen. (Charlie Coon / S&S)

STUTTGART, Germany &#8212; Ten or 15 years ago, Sgt. Maj. William J. Gainey and his fellow soldiers might have sat on one side of a room while Marines sat on the other side.

And they would have just looked at each other.

Gainey, who in October became the first senior enlisted adviser to the Joint Chiefs of Staff, has been touring the world trying to promote a spirit of compatibility between soldiers, sailors, airmen, Marines and Coast Guardsmen.

Gainey, the former command sergeant major for III Corps in Fort Hood, Texas, said he got a good look at the services working together while serving with Multi-National Corps-Iraq.

He said some airmen who had been made into truck drivers were nervous about getting on the road in a war zone. But after they trained on tactics in Kuwait and got to work in Iraq, Gainey said, the airmen performed no differently than anyone else.

Gainey, 49, was chosen for the job by Marine Gen. Peter Pace, the Joint Chiefs chairman. The South Carolina native figured that he and Pace must have hit it off during the interview process.

Gainey said that enlisted troops needed to have faith that issues facing them are being addressed from on high. As an example, he cited a recent 2,000-pound increase to the household goods allowance for E-7s and higher.

The most pressing issue that troops face, according to Gainey, is support from Americans back home.