Enhancing trust with small acts of good will 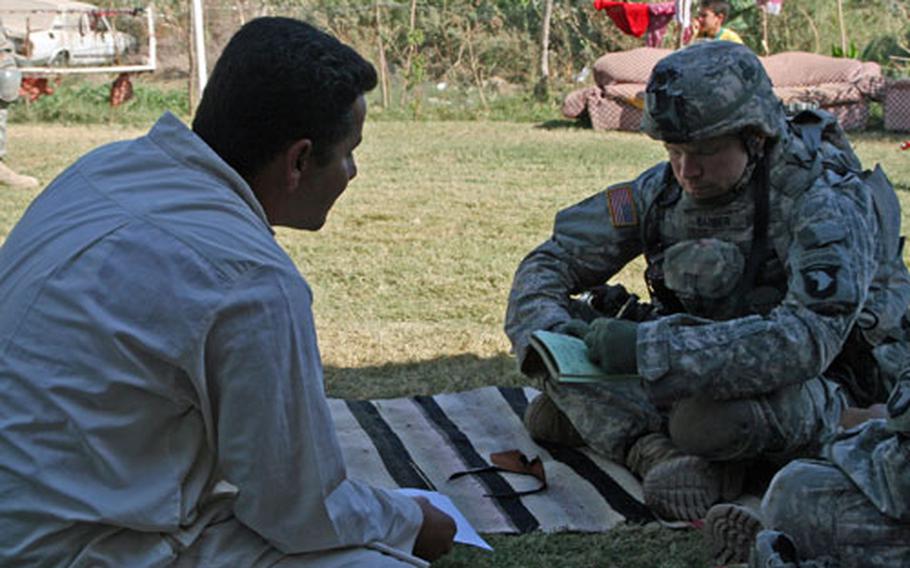 Second Lt. Red Barber, 23, of Macon, Ga., talks with an Iraqi man during a patrol near Beiji, Iraq. Barber, of 4th Platoon, Co. A, 1st Battalion, 327th Infantry Regiment said he wants to persuade Iraqis in his area to seek their own solutions to local problems, instead of relying on U.S. forces to solve those problems for them. (Drew Brown / S&S)

Second Lt. Red Barber, 23, of Macon, Ga., talks with an Iraqi man during a patrol near Beiji, Iraq. Barber, of 4th Platoon, Co. A, 1st Battalion, 327th Infantry Regiment said he wants to persuade Iraqis in his area to seek their own solutions to local problems, instead of relying on U.S. forces to solve those problems for them. (Drew Brown / S&S) 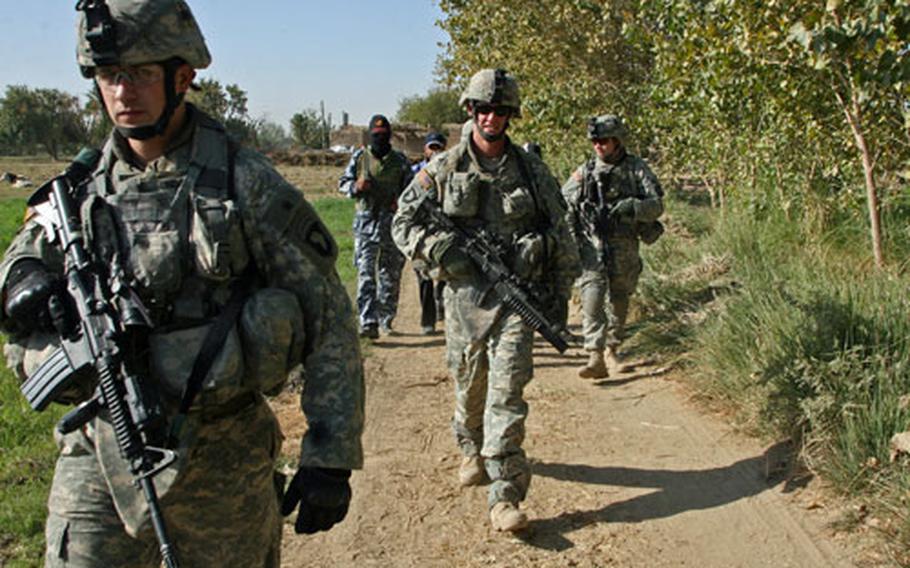 Soldiers with Co. A, 1st Battalion, 327th Infantry Regiment move out during a patrol near Beiji, Iraq. The soldiers were conducting a "sphere of influence" mission, during which they met with local residents to hear their concerns and assure them that they could rely on U.S. and Iraq forces for protection against insurgents. (Drew Brown / S&S) 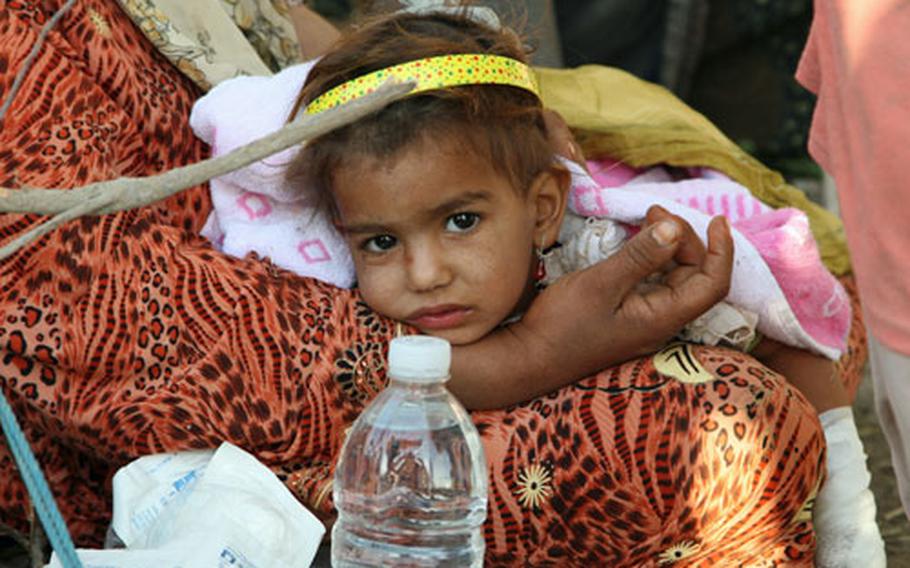 An Iraqi Bedouin girl after troops treated burns on her legs and backside during a patrol near Beiji, Iraq. (Drew Brown / S&S) 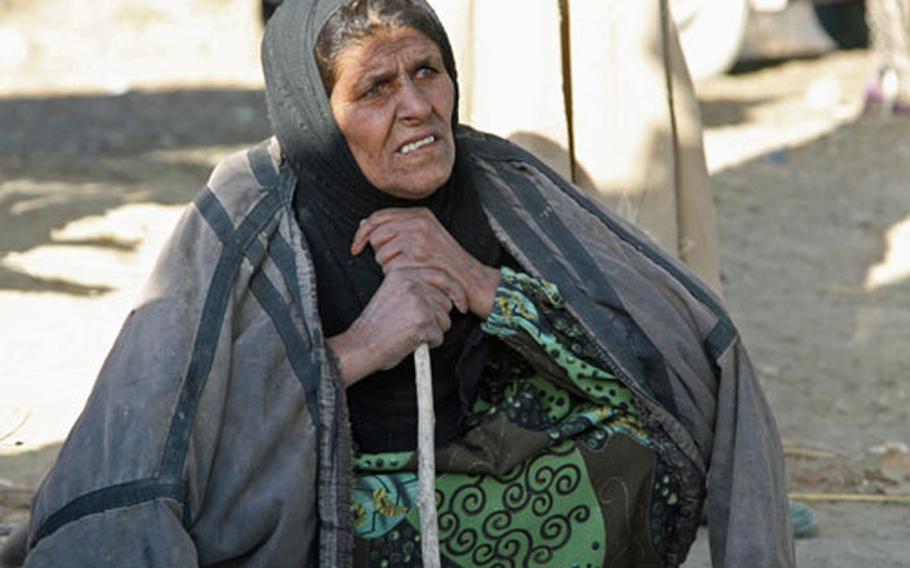 BEIJI, Iraq &#8212; The little Bedouin girl had fallen over backwards onto a pan set over an open fire, severely burning her backside, legs and hands.

By the time U.S. soldiers with 4th Platoon, Company A, 1st Battalion, 327th Infantry Regiment, 101st Airborne Division, found her, the girl&#8217;s wounds were several days old. A layer of burned skin already had peeled off. The raw flesh underneath was covered in what appeared to be candle wax, apparently meant as a salve for the burns. Her mother told the soldiers the girl was 2 years old.

There wasn&#8217;t much Pvt. 1st Class John DeLoach, a medic, could do for the girl, except clean her wounds and wrap them in gauze. The girl cried in pain and squirmed in her mother&#8217;s lap, as DeLoach dripped water from an IV bag onto her burns and dabbed them dry. He didn&#8217;t try to remove the wax, which would&#8217;ve meant pulling off more skin.

After he wrapped the little girl&#8217;s burns, DeLoach gave her mother several rolls of clean bandages. Another soldier brought over a case of bottled water. The girl&#8217;s cries had subsided, as she lay still in her mother&#8217;s lap.

The mother thanked DeLoach quietly, and wished God&#8217;s blessings upon him. A soldier slipped five dollars into another woman&#8217;s hand and urged them to take the girl to the hospital. However, an old man, who had come back from tending their stock and identified himself as the family patriarch, said taking the girl to the hospital was not their way.

The soldiers, who arrived in Iraq about a month ago, made their way back to their Humvees. They talked about the family they had just met.

The soldiers were on patrol Saturday in a farming district called &#8220;Beiji Island,&#8221; just outside the city of Beiji, which contains one of the largest oil refineries in Iraq.

They were on a &#8220;sphere of influence&#8221; mission, meeting with local residents, hearing their concerns, trying to persuade them to cooperate with U.S. and Iraqi government forces.

According to the soldiers, the insurgents around Beiji aren&#8217;t particularly strong, but several weapons caches have been discovered buried in fields. The city and its environs serve as a transit point for insurgents infiltrating northern Iraq and for foreign fighters coming in from outside the country.

The Beiji oil refinery is a lucrative source of income for insurgents and various gangs seeking to bankroll their activities. At least $1 million in oil is stolen from the refinery every day, according to U.S. troops.

While the stakes for influencing the local population are high, the efforts of U.S. forces have met with mixed results.

A goal of Saturday&#8217;s mission was to encourage local residents to rely on local police and government institutions when they encounter problems. But as the incident with the Bedouin family illustrated, people in the Beiji region &#8212; as in many areas of Iraq &#8212; tend to look to themselves first for help, their tribes second and municipal institutions last, if at all.

&#8220;The sad fact is that the only medical treatment that little girl is likely to receive is that which she got from our medic today,&#8221; said 2nd Lt. Red Barber, leader of 4th Platoon.

The incident is a metaphor for the larger set of challenges facing U.S. troops in Beiji, which is dominated by a complex web of tribal politics and a legacy of tyranny under Saddam Hussein.

There are 16 major tribes in Beiji, but the local government and police forces are dominated by members of only one tribe &#8212; the al Qaisi &#8212; whose leaders began to cooperate with U.S. forces earlier this year when Sunni tribes across Iraq broke with al Qaida.

The al Qaisi&#8217;s rise to power has created resentment among other tribes and has stymied U.S. efforts to encourage local sheiks to work together to improve security, repair local schools and hospitals and to better the delivery of basic services such as electricity and water.

A group calling itself the &#8220;Society of Educated People&#8221; announced recently that its members were willing to set aside tribal differences and work together for the betterment of Beiji, but so far, there hasn&#8217;t been much beyond rhetoric.

U.S. forces also have been hampered by the tendency to try and fix local problems themselves, Barber said. While the approach is typical for U.S. soldiers, it has also perpetuated a culture of dependence.

So, instead of seeking to provide solutions, U.S. forces now focus on &#8220;finding an Iraqi solution to an Iraqi problem.&#8221;