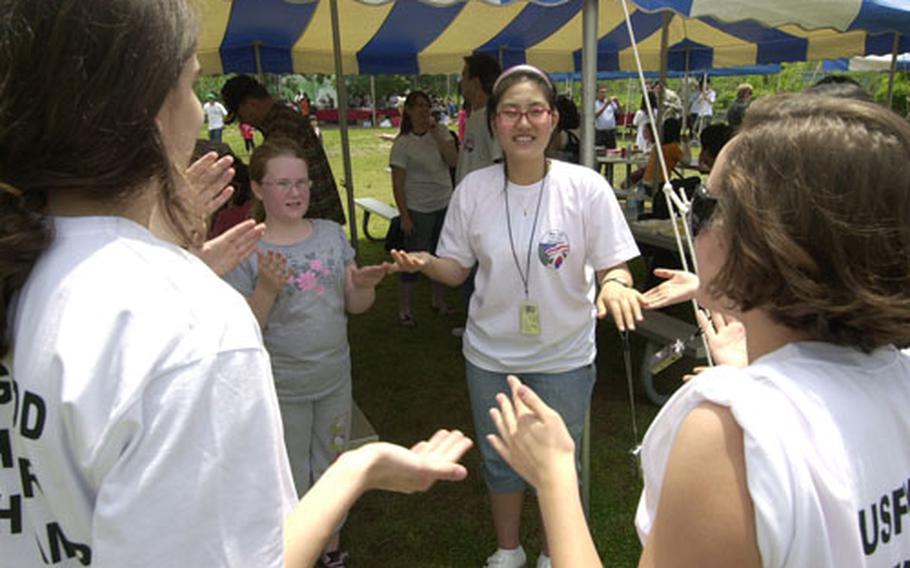 YONGSAN GARRISON, South Korea &#8212; Sixteen-year-old student Ki Mun-ju stood in a ring of South Korean and American girls here Saturday, giggling as they clapped their hands and spouted off lists of English words.

For the girls, it was a fun way to end four days of culture and language immersion for South Korean students paired with American host families from Yongsan Garrison during the 3rd Annual Good Neighbor English Camp.

But to the senior military and civilian leaders &#8212; it was a glimpse at what they hope for with the future.

U.S. Forces Korea commander Gen. B.B. Bell said programs like the English camp are vital to maintaining and improving the relationship between the United States and South Korea and are the &#8220;heart and soul of the alliance.&#8221;

As the U.S. military in South Korea continues to downsize and move into two major hubs in Pyeongtaek and Daegu, Bell warned that it would be easy to become isolated from the Korean public.

Instead, he wants the cultural exchanges and interaction to continue with Korean youth.

Ki Mun-ju said the best part of the trip was visiting Seoul American High School and learning about the U.S. education system.

&#8220;Korean students are very silent&#8221; during classes, she said. It was surprising to see the interaction between base youth and their teachers.

Brig. Gen. Sim Trombitas, who sponsored two students at his home, enjoyed watching his children and the guests interact &#8212; and put technology to work. He said they were flipping through the channels when they found a &#8220;Harry Potter&#8221; movie on a Korean channel.

&#8220;They were speaking in English,&#8221; with Korean language subtitles, he said, and the kids got a kick out of the exchange.

In remarks prior to giving each visiting student a graduation diploma, Bell said a visiting mother told his wife, Katie, something that seemed to sum up the event. Referring to the installation perimeter fence, the woman said to Katie, &#8220;We always wondered what went on behind that wall,&#8221; Bell said.