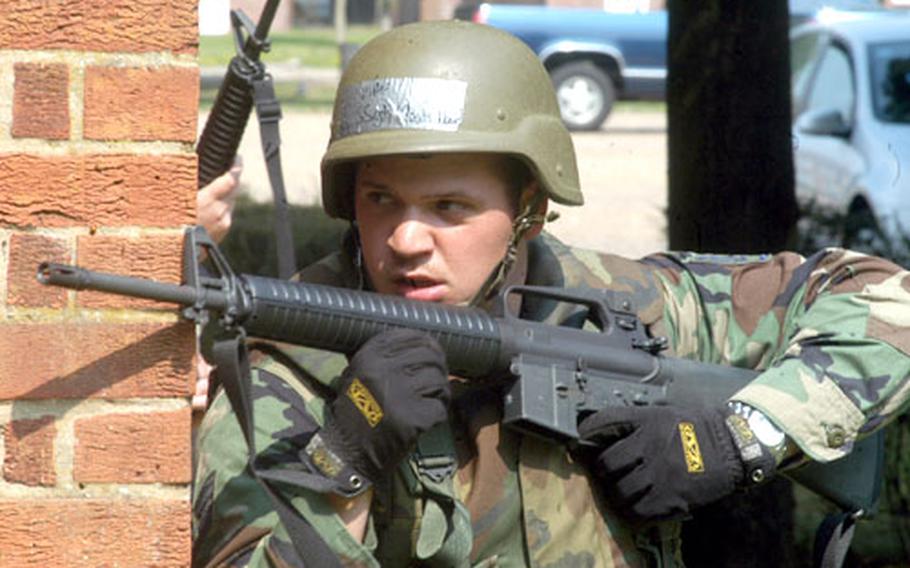 Staff Sgt. David Moats of the 48th Civil Engineering Squadron at RAF Lakenheath, England, moves slowly around the corner of a building at RAF Feltwell during a training exercise for airmen deploying to the Mideast. (Ron Jensen / S&S)

Staff Sgt. David Moats of the 48th Civil Engineering Squadron at RAF Lakenheath, England, moves slowly around the corner of a building at RAF Feltwell during a training exercise for airmen deploying to the Mideast. (Ron Jensen / S&S) 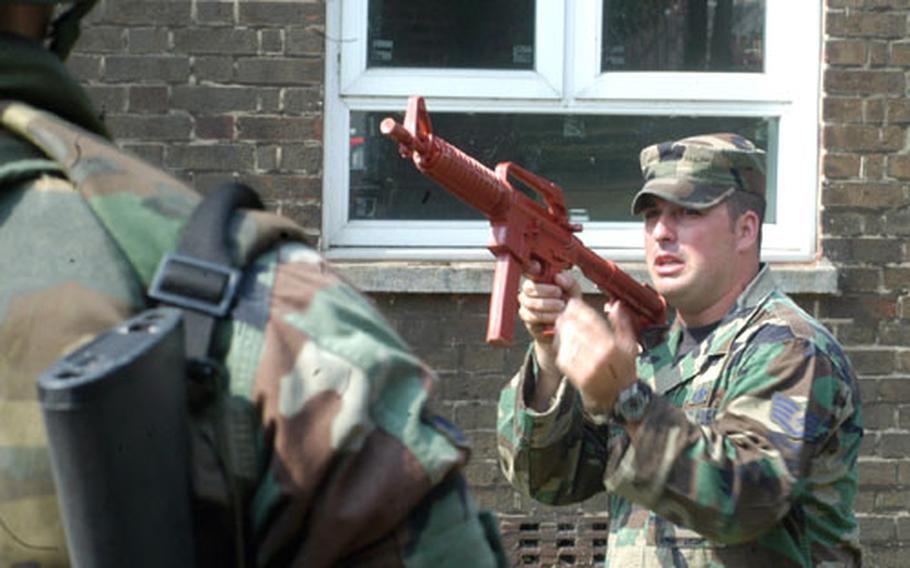 Staff Sgt. Jasen Brouillette of the 48th Security Forces Squadron at RAF Lakenheath shows other airmen how to use their weapon during a search for the enemy. (Ron Jensen / S&S)

RAF FELTWELL, England &#8212; Staff Sgt. Jasen Brouillette was pointing a training weapon at imagined targets in the windows of empty buildings and telling a group of airmen how it is done.

These were not typical instructions for an audience that included medics, mechanics and others who usually make their living far from the fight.

But these are atypical times.

Nowadays, airmen deploy to the combat zone instead of a country near the combat zone. They guard convoys and live at bases smack in the middle of unfriendly territory in Iraq and Afghanistan.

They come under fire and are expected to return fire.

&#8220;The Air Force made a commitment to have our deployers get a level of training that they were not getting,&#8221; said Lt. Col. Kenneth Ribler, commander of the 48th Security Forces Squadron, the unit providing the training.

The wing will send about 700 airmen and 10-15 aircraft to the Middle East next month as part of the scheduled Air and Space Expeditionary Force rotation. To that end, the collection of airmen from various specialties was being trained in such areas as convoy security, moving through an urban environment and weapons.

The training seems to be a big hit with the trainees.

The Air Force requires 19 hours of this training, but Rushford said they provide 24 hours of instruction over the three days.