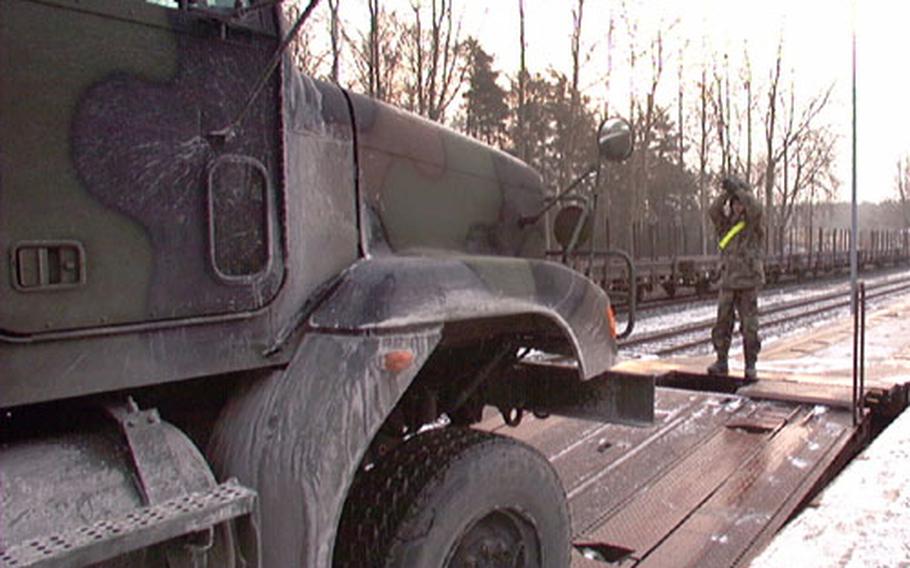 A soldier guides a 94th Engineer Battalion vehicle onto a rail car at Rose Barracks, Vilseck, Germany, on Thursday. The battalion was loading about 500 pieces of equipment for deployment to the Persian Gulf. (Rick Emert / S&S)

More than 500 pieces of equipment were loaded onto 250 train cars Thursday and Friday, headed for a port in Belgium where the equipment will be loaded on a ship and carried to the Gulf region, said battalion commander Lt. Col. Paul Grosskruger.

About 800 soldiers will follow between the end of January and mid-February, said Capt. Tom Bryant, a V Corps spokesman.

The soldiers come primarily from the engineer battalion, but also include 3rd Corps Support Command soldiers attached for support and maintenance of vehicles, Bryant said.

Grosskruger said he couldn&#8217;t comment on where the soldiers would be based. For security reasons, he could only say they are deploying to the Persian Gulf region.

Until they deploy, the soldiers will be training for their missions.

The soldiers themselves don&#8217;t know exactly what they&#8217;ll be doing in the Gulf region, other than maintaining a busy training schedule.

Sgt. Jermaine Williams, from Headquarters Support Company, said he had no idea what he would be doing during the deployment, adding that mission details are kept quiet for operational security.

This will be Williams&#8217; first deployment, and he said he is delaying telling his family in the States.

The length of the deployment is still up in the air, Grosskruger said.

He said family members also were concerned about how they learned of the deployment &#8212; by reading it in Saturday&#8217;s Stars and Stripes. He added that the battalion commander had warned families that a deployment to the region could happen.

Now, the Family Readiness Groups, or FRGs, are in overdrive trying to establish video teleconference centers so family members can talk to their spouses during the deployment, Dorminey said.

The groups&#8217; leaders also are giving information briefings to family members before the deployment, and will provide updates throughout the deployment, Dorminey said.

He said the groups make initial contact with all spouses in the unit to see if the families have any problems or concerns. After that, whether or not to become involved with the group and seek updates is the responsibility of the family member.