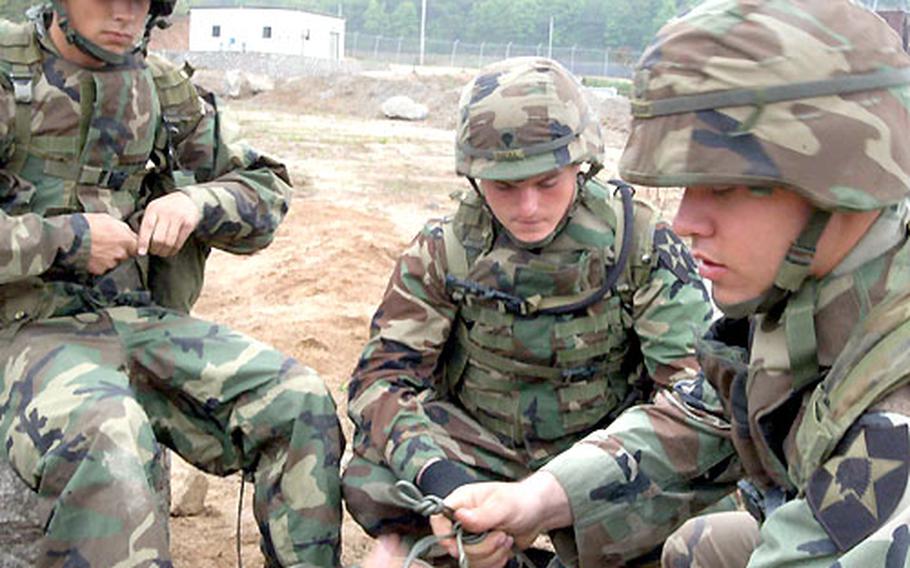 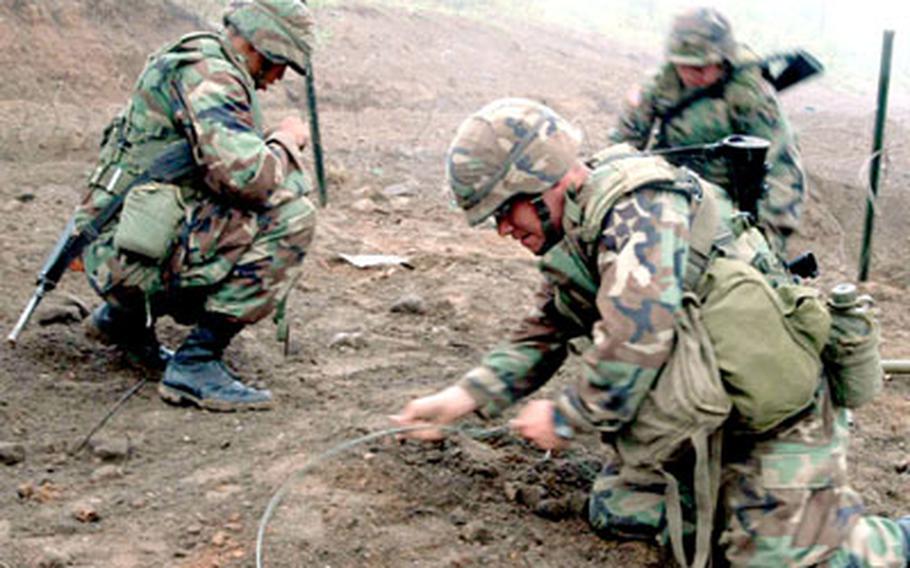 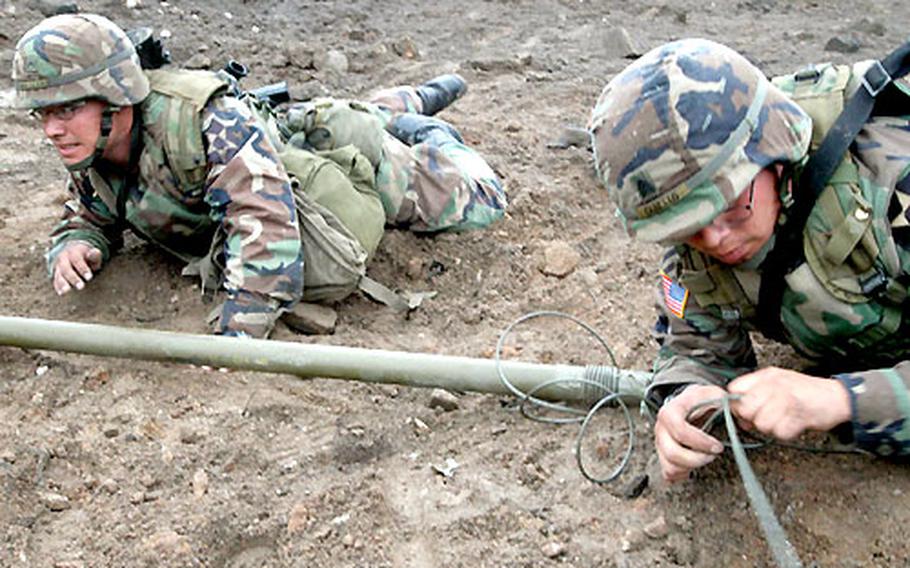 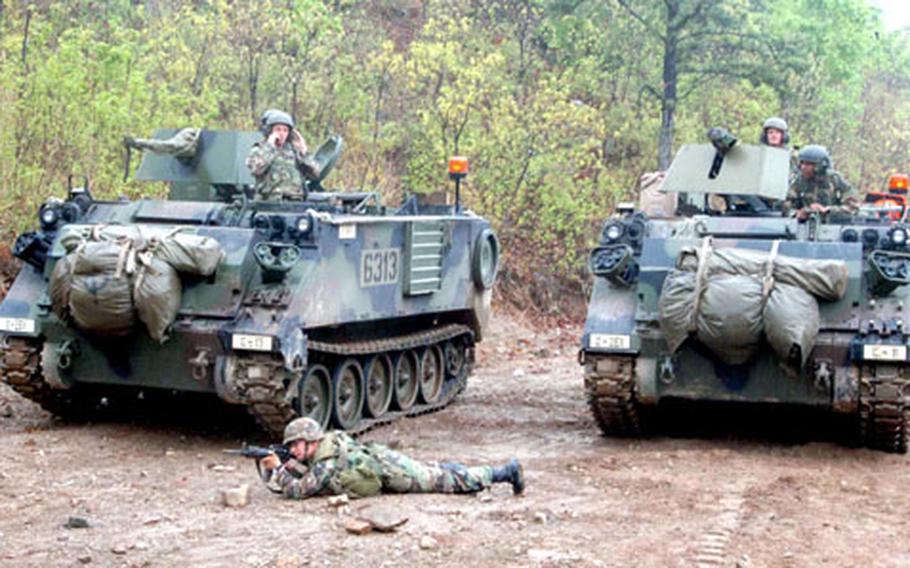 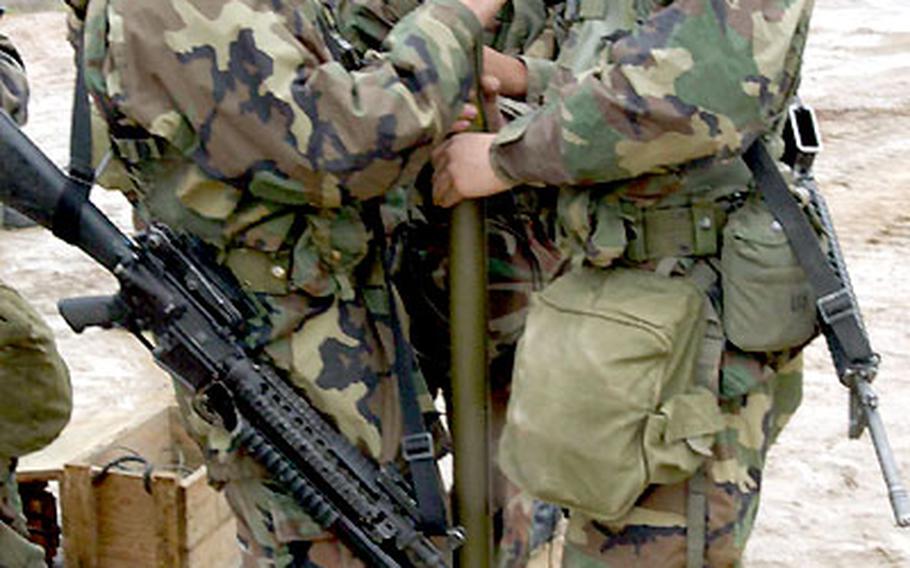 WARRIOR VALLEY, South Korea &#8212; The knots you need to tie in detonation cord to clear a minefield are not taught at Boy Scouts.

Soldiers from the 2nd Infantry Division&#8217;s 2nd Engineer Battalion worked their fingers deftly to tie knots in &#8220;det-cord&#8221; as they prepared to clear a mock minefield at Area I&#8217;s Warrior Valley range Monday.

One of the soldiers tying knots, Pfc. Daniel Sharon, said his squad would use the explosives to clear a 200-foot simulated minefield at the range.

Driving rain didn&#8217;t deter Sharon as he wound tape around the ends of the det-cord to stop powder falling out.

The soldiers appeared unconcerned as they sat surrounded by piles of explosives.

Neal said C4 is relatively stable and requires heat and pressure to set it off, but that he is extra careful with blasting caps.

&#8220;When you breach a wire obstacle, you need a long length to slide in there so [the bangalore] takes out the whole width of the wire,&#8221; he said.

Two bangalores placed in a V-share will blow a 12-foot hole in a wire, Brannon said.

The five squads of engineers training Monday had 30 bangalores to dispose, so they used six at a time.

When they arrived, a soldier emerged and fired a grappling hook from a device attached to his M-16 rifle.

The hook landed within a few feet of the razor wire at the far end of the minefield. Then the soldier pulled the hook back to clear any possible booby traps.

Pvt. Jonathan Miller, who advanced into the minefield with Pfc. Jose Morales and Sgt. Juan Cabello, bearing the C4 and the bangalores, flung a second grappling hook into the wire.

Morales and Cabello, lying in a field of thick, brown mud, slid bangalores under the wire.

The squad moved back laying C4 charges next to each practice mine &#8212; represented by round sections of tree stump strewn on the ground.

When everything was ready, a 5-minute fuse was lit, and the soldiers took cover inside the M-113.

The delay before the blast seemed like eternity. When it came, the explosion sent a shock wave that rattled nearby trees and filled the valley with a thick cloud of grey smoke.

The wire that had blocked the way was scattered, and the sections of tree stump that represented the mines were blown to splinters.

As the soldiers rebuilt the obstacle for the next squad, Staff Sgt. Richard Lamb, who supervised the training, praised them for their good work while warning them to make sure they did not roll on the mines while laying the charges next time.