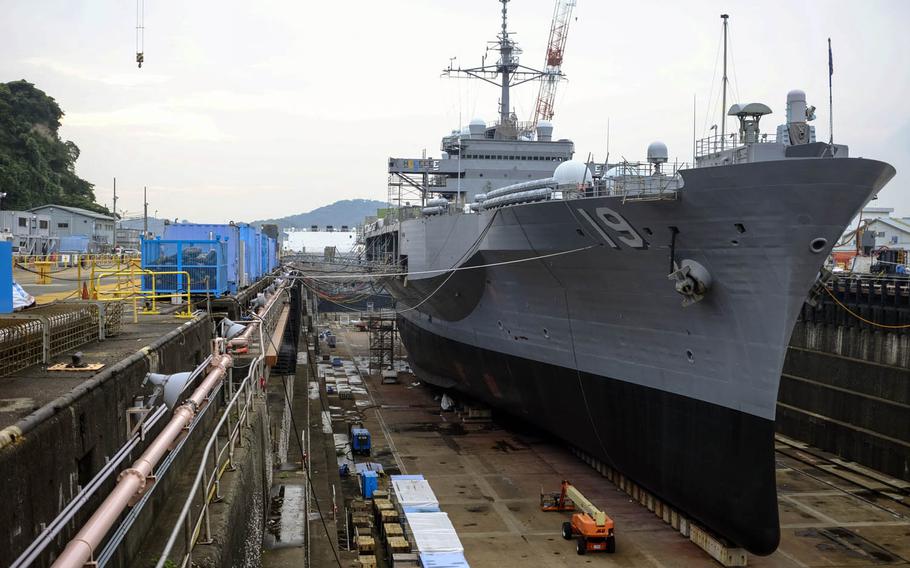 The USS Blue Ridge is seen in dry dock at Yokosuka Naval Base, Japan, Thursday, Sept. 7, 2017. (Tyler Hlavac/Stars and Stripes)

YOKOSUKA NAVAL BASE, Japan — Unexpected engineering problems will keep the USS Blue Ridge in dry dock through early next year — months past its scheduled completion date of August 2017.

Issues with the engineering plant will require the amphibious-command ship to undergo additional repairs for several months into 2018 before returning to service, 7th Fleet Spokesman Lt. Cmdr. Adam Cole told Stars and Stripes in an email.

“While modernization of Blue Ridge’s communications suite has gone very well, additional maintenance is required to address issues with the ship’s engineering plant which is nearing 50 years in service,” he said. “Once these repairs are finished, Blue Ridge will resume its role as Seventh Fleet’s command ship and play a critical role as our forces operate forward on a daily basis.”

The Blue Ridge, which is the flagship of the Yokosuka-based 7th Fleet, entered dry dock in June 2016 for what was then scheduled to be a 14-month period, a Navy statement said at the time. The ship was scheduled to undergo various maintenance, repairs, refurbishments and system upgrades.

The Blue Ridge, which was commissioned in 1970, is the oldest deployable warship in the Navy and the second oldest still-active ship, the Navy said. Only the USS Constitution, which is primarily a ceremonial ship, is older. In 2011, the chief of Naval Operations extended the Blue Ridge’s service life into 2039.

The Blue Ridge is one of only two amphibious-command ships still in service. The other, the USS Mount Whitney, is the flagship for the Navy’s 6th Fleet out of Naples, Italy. The Blue Ridge’s dry dock extension comes after a series of accidents forced the USS Antietam and USS Fitzgerald into repairs at Yokosuka, occupying three of the base’s six dry docks. The Antietam was damaged after running aground in January, and the Fitzgerald was damaged in a June 17 collision with a merchant ship that killed seven U.S. sailors.

Navy officials announced last month that the Fitzgerald would depart Yokosuka sometime between mid-September and the end of October to complete repairs stateside, because the base needed to free up space along Yokosuka’s waterfront for other 7th Fleet ships needing maintenance.

The USS John S McCain, damaged in an Aug. 21 collision with a civilian merchant ship that killed 10 sailors, is scheduled to arrive in dry dock at Yokosuka sometime between late September and early October.

“Blue Ridge leadership is ensuring newly reported crewmembers are sent temporarily to other ships or can get requisite training ashore,” he said. “Primary navigation watchstanders are being placed on Yokosuka-based ships to get sea time and earn qualifications. [The] crew is taking advantage of every opportunity possible.”