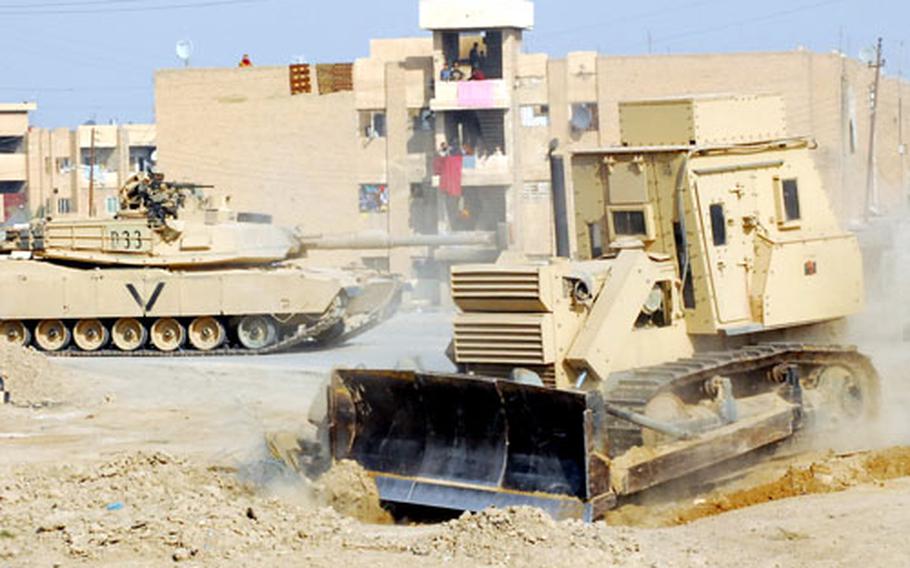 A bulldozer with the 19th Engineer Battalion clears debris from a street in Baqouba recently. One of the battalion&#39;s chief duties is to repair roadside bomb craters in Iraqi streets and clear shoulders of debris that can be used to conceal insurgent gunmen or explosives. (Monte Morin / S&S)

A bulldozer with the 19th Engineer Battalion clears debris from a street in Baqouba recently. One of the battalion&#39;s chief duties is to repair roadside bomb craters in Iraqi streets and clear shoulders of debris that can be used to conceal insurgent gunmen or explosives. (Monte Morin / S&S) 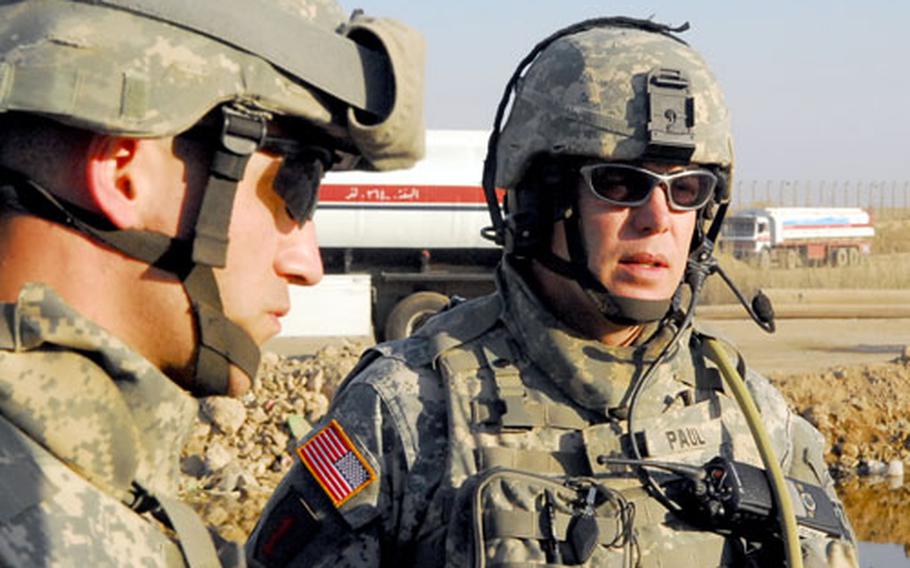 &#8220;Sometimes you get the feeling that you&#8217;re the red-headed stepchild,&#8221; joked Lt. Col. Courtney Paul, commander of the 19th Engineer Battalion &#8212; the first newly created modular engineer unit to deploy to Iraq.

But if Paul and his engineers felt left out amid the legions of tankers at their home station of Fort Knox, Ky., their popularity has skyrocketed in Iraq.

The unit, which was stood up just over a year ago, is dedicated to the repair and &#8220;sanitation&#8221; of Iraq&#8217;s cratered highways, as well as the construction of essential fortifications at U.S. bases in northern Iraq. As such, their services are in great demand.

Such was the case recently when Paul, 41, of Lipscomb, Texas, visited Forward Operating Base Summerall, near Beiji. The base is home to soldiers of the 1st Brigade, 505th Parachute Infantry Regiment, 82nd Airborne Division, and the area has seen numerous deadly attacks by insurgents.

Prior to the invasion of Iraq, the area was a primary storage point of land mines, and the devices are frequently used to attack U.S. troops there.

During Paul&#8217;s visit, officers with the 1-505th presented the engineer with a wish list of projects that included the demolition of a bombed-out building in the city, placing barriers near checkpoints, and clearing and paving critical routes near the base.

The improvements were badly needed, they said, but it seemed as if they would never be done.

The 19th, which is currently attached to the 25th Infantry Division&#8217;s Task Force Lightning, is based at Contingency Operating Base Speicher, near Tikrit.

While engineers with the Air Force or private contracting firms are often called on for projects within bases, Paul said his battalion is dedicated to working on projects outside the wire.

Paul said that sometimes units who ask for his engineers&#8217; help don&#8217;t realize this, and ask them to build things that aren&#8217;t a force protection priority.

In those instances, Paul said he has to tell them no.

This was not the case regarding the FOB Summerall request.

The 19th Engineer Battalion traces its lineage back to World War II, when its parent unit specialized in securing beach heads for amphibious assaults and bridging rivers in Europe.

A sea horse on the unit&#8217;s crest pays homage to these duties, and red sea horses and castles are stenciled onto the battalion&#8217;s Humvees and heavy equipment.