Engineer battalion in Iraq has two sets of twins 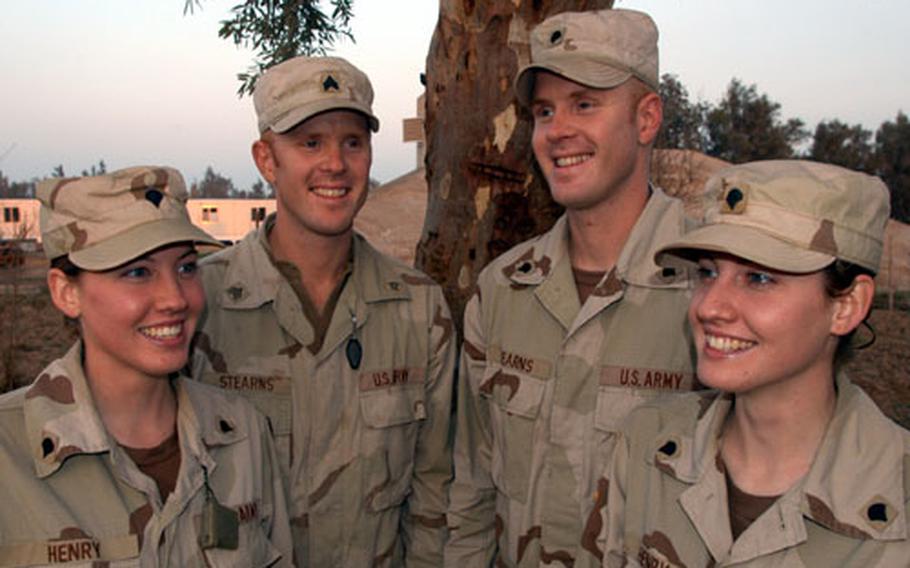 BALAD, Iraq &#8212; When Spc. Amy Henry walks through the mess hall, soldiers often do a double take &#8212; especially when her twin sister, Amanda, is walking beside her.

All four soldiers serve with the 142nd Engineer Battalion, a National Guard unit tasked to make improvements on this former Iraqi air base north of Baghdad.

The 22-year-old sisters from Royalton, Minn., are carpentry-and-masonry specialists, who are using their artistic skills to help spruce up the camp.

Amanda, also an Army specialist, is two minutes older than Amy. Sitting together, the two finish each other&#8217;s sentences, bump their elbows together and giggle with the same sweet laughter.

When Amanda went on leave in October, it was the farthest the pair had ever been separated.

Each Sunday, the women go to church with their father, Sgt. 1st Class Dan Henry, a platoon sergeant in their company. They eat lunch together, then drive a 5-ton truck for a family trip to the post exchange.

The military has grown into a family tradition for the Henrys. Another sister, Jessica, is also in the Army and going through basic training.

Having his twin daughters with him in a combat zone has been difficult at times, Dan Henry said. For several months, Iraqi insurgents lobbed mortars into the base.

Most folks can tell them apart, but some still mix them up. Justin is a sergeant, while Jamie is a specialist. And soldiers rarely go by first names anyway.

The twin syndrome is harder to explain to local Iraqis working on base, Jamie said. One Iraqi approached him eager to talk. It didn&#8217;t take long to figure out the man had met Justin earlier.

In recent years, the brothers have been busy with their separate lives. In some ways, the deployment brought the twins closer together, they said.

Justin, a banker in Fargo, spends much of his free time with his wife, Jen. They have one daughter, Keegan, 2, and a son, Tate, who was born last January, three days before Justin&#8217;s unit mobilized for overseas duty.

A graphic artist, Jamie lives in Minneapolis with his girlfriend, Claudette.