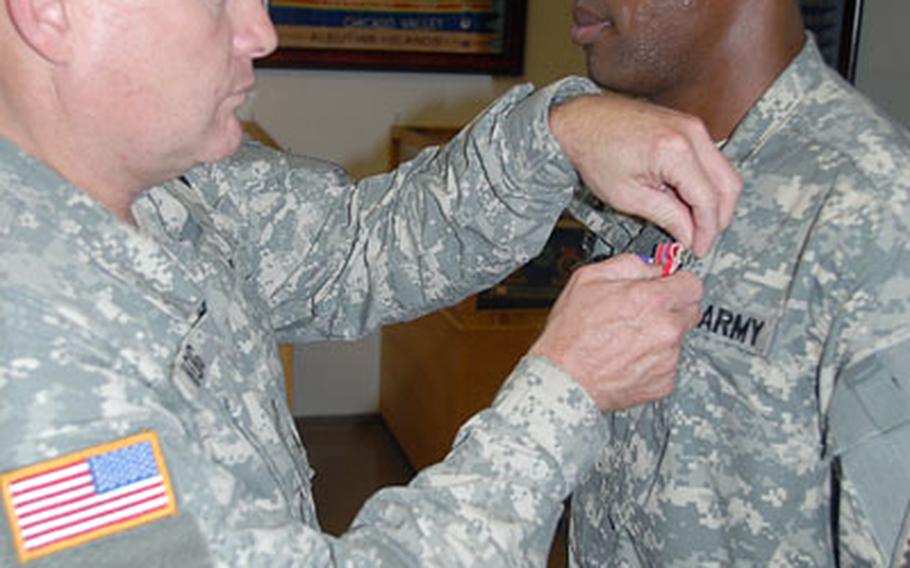 Everyone in the room wanted to shake Spc. Marcel Green&#8217;s hand.

The same hand had fired a machine gun from the turret of an armored Humvee during a firefight with insurgents in Zabul province, Afghanistan, on Feb. 7.

Green and the rest of his Company B, 1st Battalion, 4th Infantry Regiment patrol were ambushed by 10 to 15 enemy fighters, according to Brig. Gen. David R. Hogg, Joint Multinational Training Command chief.

&#8220;[Green] was the only gunner in a position to return fire. He returned fire. What happens when you return fire? You become a magnet for incoming rounds,&#8221; Hogg said.

Subsequently, all the enemy fire was directed at Green.

But the 24-year-old Plantation, Fla., native continued to return fire even as two rocket-propelled grenades slammed into his vehicle. One of the RPGs blew off the Humvee&#8217;s turret along with two of Green&#8217;s fingers and his thumb on his right hand, Hogg said.

Green remembers the blast knocking him down inside the Humvee, passing out and regaining consciousness moments later with the battle still raging.

With bullets zinging all around, Green recovered two bloody M-4 rifles that had been inside the Humvee, cleared the weapons and handed them to another soldier so he could keep up the fire.

The patrol killed most of the enemy and sent the rest home with stories about how tough American soldiers are, said Hogg, who awarded Green a Purple Heart and a Bronze Star with valor device on Monday.

Green more than earned his awards for courage under fire, he said.

&#8220;There are some folks who owe their lives to you for your action under fire,&#8221; he told Green, who had a big smile for the general as the pair sweated inside the 1-4 headquarters building at Hohenfels on a blisteringly hot summer day.

The young infantryman was medevaced to Germany just three weeks after he&#8217;d arrived in Afghanistan.

Since then he&#8217;s had three surgeries on his wounded right hand. The pinky and ring fingers are missing, but doctors reattached his thumb. Another surgery is planned to realign the thumb, Green said.