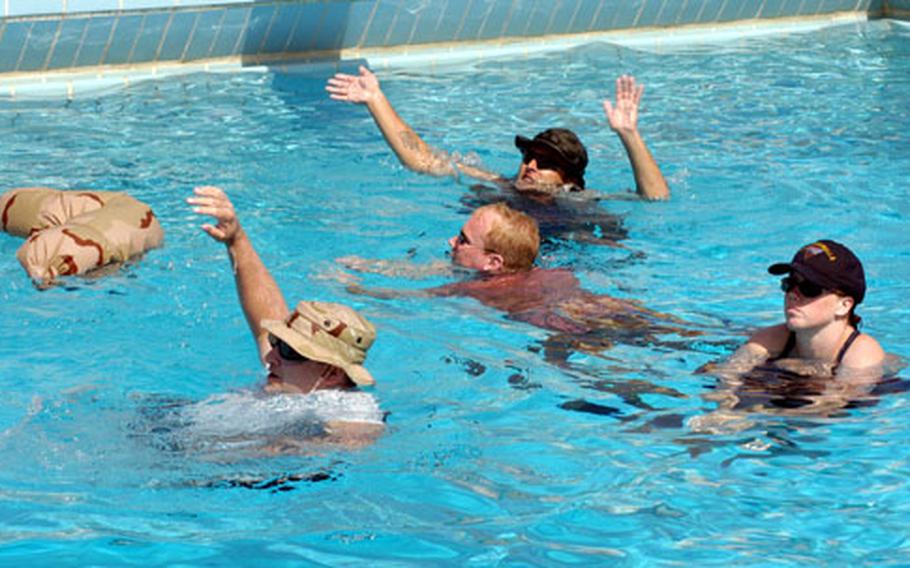 Sailors taking part in Naval Air Station Sigonella&#39;s USS Indianapolis Endurance Challenge wave at passing helicopters to simulate what it must have been like for the survivors of the Indianapolis to try and get the attention of passing planes. (Jennifer Rumbach / U.S. Navy)

Ten sailors from Naval Air Station Sigonella, Sicily, observed the 60-year anniversary of the sinking of the USS Indianapolis by plunging into a base pool &#8212; and staying there for 12 hours.

The sailors were taking part in the USS Indianapolis Endurance Challenge &#8212; an event they hope will become Navywide.

&#8220;This experience is part of holding up that part of the sailor&#8217;s creed that says, &#8216;I represent the fighting spirit of the Navy and those who have gone before me to defend freedom and democracy around the world,&#8217;&#8221; Petty Officer 1st Class James Hansen said as he treaded water, according to a news release about the event.

The USS Indianapolis delivered the world&#8217;s first atomic bomb to the island of Tinian on July 26, 1945. Four days later, a Japanese submarine torpedoed the cruiser, and it sank in the South Pacific within 12 minutes.

Of the 1,196 crewmembers, about 300 went down with the ship. The remaining sailors floated in the shark-infested waters four days. Of those, 317 survived and were rescued.

A history of the vessel, the attack, the court-martialing and subsequent attempts to exonerate the commanding officer of wrongdoing, and survivors&#8217; logs are posted on the Internet at: www.ussindianapolis.org.