Endangered crows released on U.S. military base on Guam 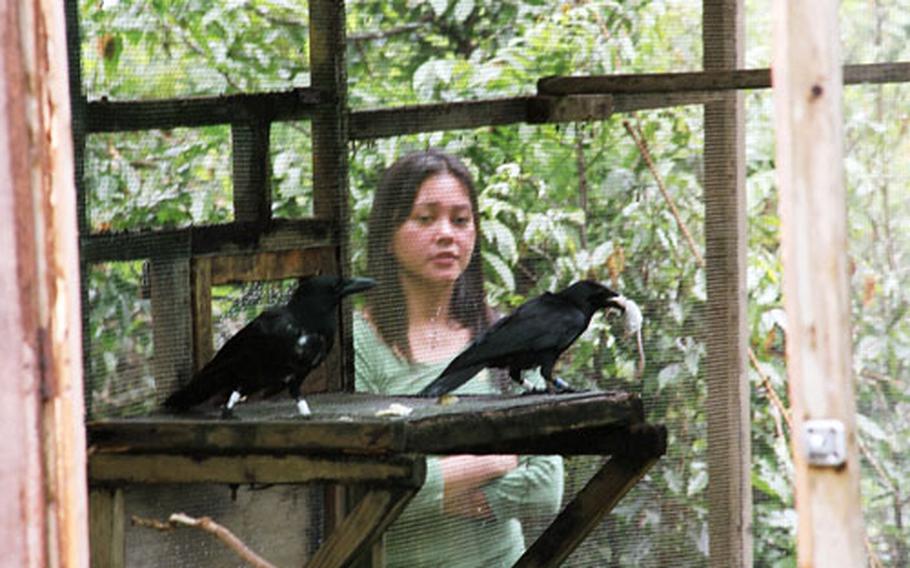 One of the Marianas crows brings a dead mouse into its cage. The mouse was set out to coax the birds out into the surrounding jungle at Andersen Air Force Base. Behind the cage is Jenny Duenas, a University of Guam student who is studying the crows. (Frank Whitman / S&S)

Air Force and government officials on Guam took part in the release of five endangered Marianas crows into the pristine habitat of Andersen&#8217;s Munitions Storage Area on Monday, part of a Guam Department of Agriculture program to save the birds from extinction.

The crow population, like that of other bird species in Guam, has been devastated by the non-native brown tree snake. It is the fifth such release since 1999, said Blaine Dicke, a Guam Agriculture Department, Division of Aquatic and Wildlife Resources biologist.

&#8220;The crow program is more like captive rearing,&#8221; she said. Biologists say crows kept in captivity lose nest-building skills and are otherwise unable to care for their young &#8212; so eggs and chicks vulnerable to snakes are removed from the wild and then released when they are one to two years old.

The four males and one female released Monday were collected as eggs from the nest of a pair of crows that were brought to Guam from nearby Rota as chicks and released into the Andersen habitat as adults.

The newly released birds were fitted with leg bands that will permit biologists to monitor them via a tracking device both for location and behavior. Once it appears that a nest is in the works, the biologists will attempt to locate it so they can install &#8212; on the sly, of course &#8212; an electronic barrier to protect the nest from the snakes. It is possible for the new group of birds to produce a nest and offspring this year, Vice said.

The area also is targeted for more intense snake trapping, she said.

The road to the establishment of a crow population no longer needing human intervention is a long one. The first step will be to reduce Guam&#8217;s snake population, and though current experiments to that end are yielding promising results, a comprehensive program is years away, experts say. In the meantime, the DAWR crow program is monitoring only two active, barrier-protected nests and 15 birds.

Brown thanked the Air Force for its cooperation in this and similar projects.

&#8220;We know this is not your primary mission,&#8221; she said, pointing out the importance of such work to the people of Guam.

Boera said he felt that &#8220;we have found the right balance&#8221; between the military mission and helping to protect the environment, and was glad to help.

The crows in question, however, appeared less excited about the project than the humans at the ceremony.

Boera and Brown opened the birds&#8217; cages wide, but despite coaxing with food, it was 15 minutes before the first one emerged and disappeared into the trees.