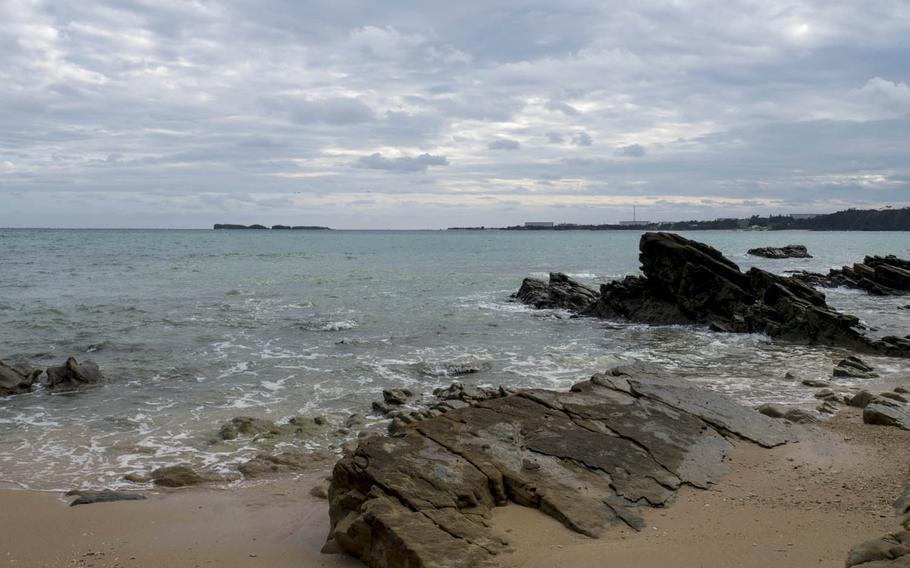 An endangered species of coral has been found in waters off Henoko in Okinawa, where construction is underway for the relocation of Marine Corps Air Station Futenma, Japan's Defense Ministry said on Wednesday, Sept. 27, 2017. (Jessica Bidwell/Stars and Stripes)

CAMP FOSTER, Okinawa — An endangered species of coral has been discovered where a U.S. military runway is being built for the relocation of Marine Corps Air Station Futenma, threatening to derail construction on the project.

The coral — called Porites okinawensis — was found during a July survey by the Okinawa Defense Bureau, an agency spokesman said.

A panel of Japanese government experts announced the discovery on Wednesday.

Japan’s Ministry of the Environment says the coral is facing extinction, and it has been included on the nation’s Red List of Threatened Species.

Construction has continued on the project because bureau officials said the coral will not be impacted by the work.

“[Construction] will not have an effect on the coral, and its living environment will be maintained,” the spokesman said.

Bureau officials said they plan to seek permission to move the coral from the site but need the consent of the prefectural government, which has vowed to block the project altogether.

In the meantime, the officials said they plan to set up additional monitoring to make sure the coral lives.

It remains unclear what impact the discovery will have on a lawsuit filed in July by anti-base Gov. Takeshi Onaga seeking to suspend construction. The suit says the central government did not get a required permit to break coral.

Local officials indicated Thursday they would use the discovery to further contest construction. An official from the Henoko Base Construction Countermeasures Division said that while the Japanese courts struck down Onaga’s 2016 revocation of permitting for the project that had been granted by his predecessor, this was a “different procedure under different law.”

“We will discuss our policy in dealing with the issue since we just received briefing today,” the official said. “We will examine it strictly based on the law if a request of permission is made.”

Some of the endangered coral found at the site was already dead, local media reports said. It is generally less than 3 inches across.

The relocation has been in the works since the mid-1990s as a way to ensure the safety of residents living around the land-locked Futenma air station, which would be shuttered once air assets move to Okinawa’s remote north. A small but fervent local opposition — coupled with popular support — got Onaga elected in 2014 on a platform that vowed to block the project.