End of the road: 143rd cases its colors in Kuwait 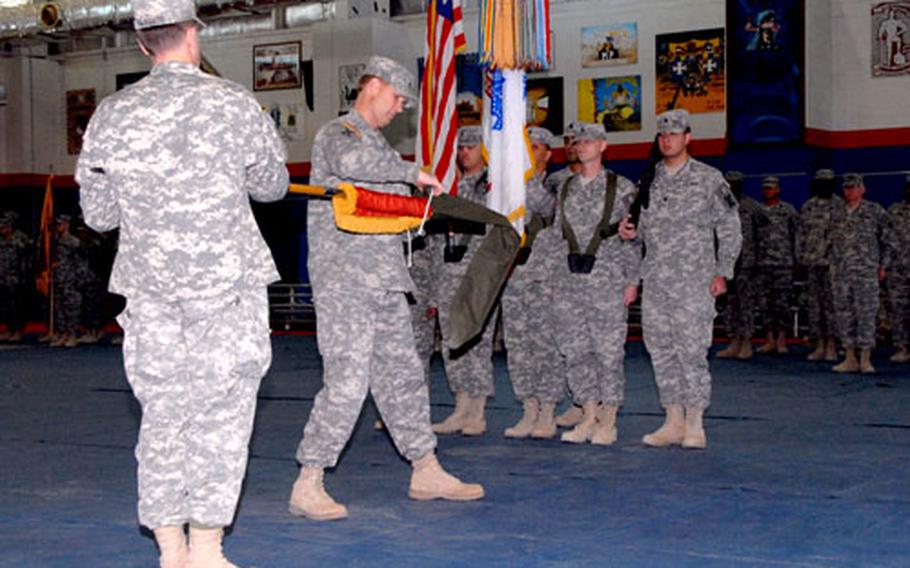 Brig. Gen. Keith Thurgood holds the flag while Sgt. Major Michael Schultz slips it into a cover during the casing of the colors ceremony for the 143rd Transportation Command Monday at Camp Arifjan in Kuwait. (Megan McCloskey / S&S)

CAMP ARIFJAN, Kuwait &#8212; The rip of Velcro was a disheartening sound for some soldiers Monday as they reluctantly took off the insignia patch of the 143rd Transportation Command.

The 143rd forward detachment was deactivated Monday in a casing of the colors ceremony. The patch is two interlaced ribbons with arrowheads on each end. Headquarters for the command &#8212; part of the U.S. Army Reserve &#8212; will be deactivated in 2007.

The logistics command, which has units located in Florida, Georgia, Alabama and North Carolina and has been around since 1967, will become the 143rd Sustainment Command (Expeditionary).

The change is part of the Army&#8217;s service-wide transformation.

Thurgood &#8212; who in civilian life works for Pepsi in Plano, Texas &#8212; said the change reorganizes the transportation and supply elements into one command, creating &#8220;a more effective and efficient distribution system.&#8221;

Managing the supplies &#8212; food, fuel and ammunition, for example &#8212; and transporting the goods will be handled by a single commander, eliminating the need for often cumbersome coordination, Thurgood said.

For the individual soldier, the change will be minimal. They will do the same job, just under a different command structure.

The soldiers are about halfway through a one-year deployment in Kuwait and only some of them will be finishing out the tour. Those who are staying will be merged with the 377th Theater Support Command.

Some of the folks are leaving because the 377th already has someone doing their position &#8212; chief of staff, for example.