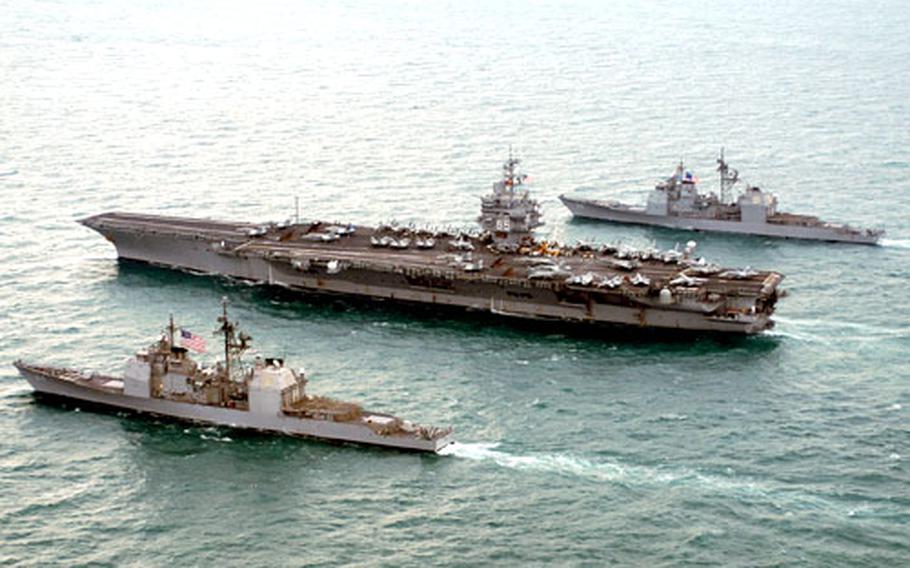 This is the first aircraft carrier port visit to Naples since the USS George Washington&#8217;s stop in October 2002.

The Enterprise and its air wing deployed from Norfolk, Va., on Aug. 29 and are expected to return home within the next month after a short port visit in Spain.

Deploying with the Enterprise as part of its 10-ship, 7,100-sailor, carrier strike group are two cruisers &#8212; including Gettysburg &#8212; five destroyers, one frigate and a supply ship.

Sailors took the time in port to tour Naples, and some even visited Rome.

Bell said she even enjoyed the port visits in the Middle East, especially shopping in Dubai.

Petty Officer 1st Class Geovarrie Lopez of the Gettysburg enjoyed the Naples port visit, but it wasn&#8217;t his first time here. He was last in Naples during summer 1994 while stationed aboard the USS Simon Lake based at La Maddalena, Italy.

Lopez said he&#8217;ll most remember going through the Suez Canal.

During the ship&#8217;s nearly four-month tour in the Middle East, Enterprise aircraft struck Iraqi targets in November and early January.

In January the carrier took part in the weeklong exercise Sea Saber, a multinational exercise designed to fight weapons of mass destruction trafficking in the Persian Gulf.

Earlier this month two F-14 Tomcats struck each other in flight over the Red Sea. There were no injuries and both aircraft landed back on the ship.

The Enterprise will be relieved in the Persian Gulf by the 7,600-sailor George Washington carrier strike group, which deployed from Norfolk on Jan. 20.