EMTs in Europe brush up on their training 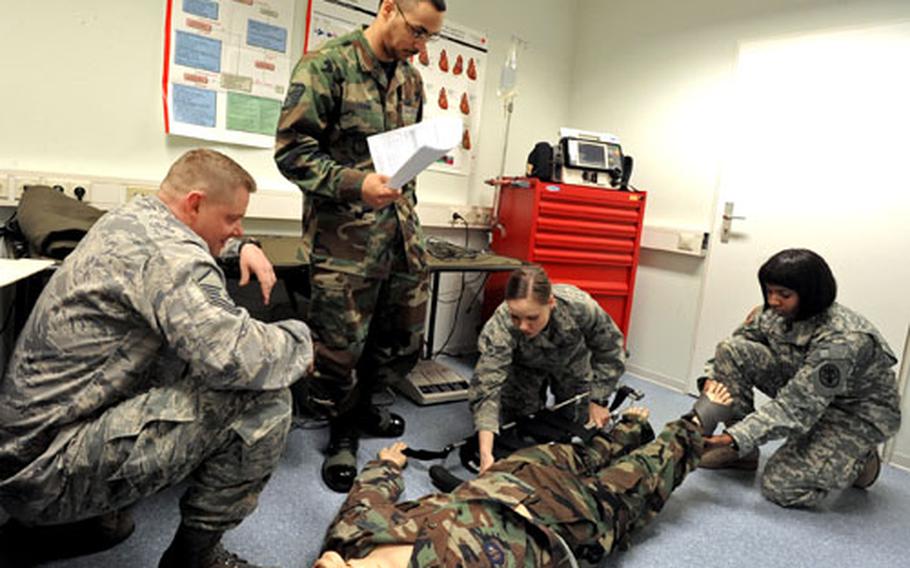 RAMSTEIN AIR BASE, Germany &#8212; Senior Airman Nathaniel Cook has cared for broken bones and burns on the fly in two combat zones.

In Iraq, working side by side with military medical technicians, he learned how to effectively apply a traction splint when a soldier struck by a Humvee broke his femur.

When six interpreters were burned in a propane explosion in Afghanistan, Cook, lacking sterile water, cut open an intravenous bag to cool and clean the wounds.

It was a lesson in "how to improvise, how to work with limited supplies," said the 22-year-old firefighter assigned to Ramstein.

Deployed three times during four and a half years in the Air Force, Cook shared his experiences with military firefighters and medical technicians from eight U.S. Air Force bases in Europe during a first-of-its-kind emergency medical instructors course at Ramstein.

Twenty were gathered for nearly two weeks of instruction with the aim of improving and standardizing emergency medical training across the command.

"With bases downsizing, we have very few emergency rooms" in the Air Force, said the course&#8217;s instructor, Master Sgt. Jeff Cahill, U.S. Air Force Emergency Medical Services program manager from Sheppard Air Force Base, Texas. "We have a lot of clinics; this allows the instructors to spread their experiences back and forth, because some have never worked ambulance services."

Usually the people tasked with instructing those courses are EMTs from within a unit; they may be skilled and passionate but not always equipped with the right teaching tools, Cole said.

"They never had the fundamentals of how to be a good instructor, which relates directly to the quality of patient care," he said.

Students brushed up on instruction techniques and had to lecture on random topics in front of a group. Staff Sgt. Corrine Stewart, 28, a family practice medical technician at Lajes Air Field in the Azores, gave an impromptu three-minute speech on water guns.

"I kind of have a fear of speech in front of people," she said. "This helped me overcome that a little."