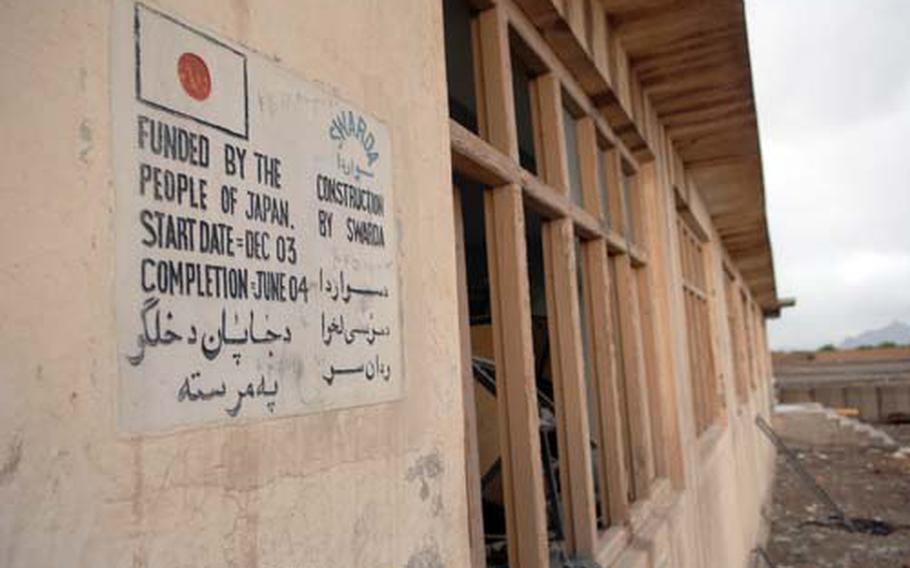 A sign on a former school hints at the hopes the area once had for educating children. This building is now a National Police checkpoint. (James Warden / S&S)

A sign on a former school hints at the hopes the area once had for educating children. This building is now a National Police checkpoint. (James Warden / S&S) ARGHANDAB, Afghanistan &#8212; A glimmer of pride still sparkles beneath the dust coating the shattered building&#8217;s sign.

The sign maker even stenciled in a colored sketch of the Rising Sun.

Three buildings wear the faded badges. Each building was once a school catering to impoverished students in the deserts north of Kandahar. Each is now a hollow shell of the hopes that Japanese citizens sent across a continent.

Empty desks piled behind locked doors still conjure up the memory of classes taught and lessons learned, but those memories are mere ghosts of a past that never became a future.

Taliban attacks shattered most of the windows. The rough habits of the Afghan National Police who now live here corrupted the buildings further. Charred spots mark where the police turned white-walled niches into make-do grills. Debris that they heaped in vacant classrooms turned each building into just another reeking husk on the Afghan landscape.

The government has tried to revive some of the schools. It once moved an Afghan National Army unit out of one in order to make room for students. Village elders pushed the government for teachers. But the building sat vacant for about a month. Eventually, National Police occupied the rooms where the soldiers once lived.

"How the hell are we going to bring teachers in?" an American adviser asked. "We can&#8217;t even secure our own IED (improvised explosive device) threat."

Residents tell soldiers that children in the surrounding villages are still learning. They attend classes in small groups at local homes. Capt. Kenton Patrick, the adviser, is skeptical. In an area with such a huge illiteracy problem, he&#8217;s not sure the villagers have the skills to teach the students &#8212; especially the older ones.

With the children gone, the desert winds continue to paint the decaying buildings with dust &#8212; each new layer covering up the pride and hope that once shone brightly in this part of Afghanistan.

The Arghandab shura has always been a place where local leaders sought help from coalition forces. But when the village elders got together for their weekly meeting Thursday they had a request very different from the development projects they normally ask for. They wanted satellite phones to help them communicate better when emergencies happen.

Arghandab actually has pretty good cell phone coverage considering its rugged terrain and rural character. But cell phone towers are only on from morning until early evening because the Taliban has threatened dire consequences if they aren&#8217;t turned off during the night. The leaders figured satellite phones would help them get around the problem.

Capt. Kenton Patrick, the police mentoring team leader for the district, told the leaders that they could communicate just fine without satellite phones. Coalition forces have distributed handheld Motorola radios to Afghan National Police that allow them to always stay in contact with them. The leaders could always contact the police if they had a problem.

"You have a very capable police force that has communication with their checkpoints," he said. "If you would be using them a little bit more, they would be responding to these incidents. There&#8217;s plenty of forces here to respond to incidents &#8212; no matter what time or where they&#8217;re at &#8212; right here in your district."

That argument didn&#8217;t sway the local leaders, though. They insisted the district needs at least one satellite phone.

Patrick said such a proposal would be expensive and it was doubtful the leaders would receive satellite phones. Still, he promised to forward the request through the chain of command.