Empowered by the U.S., imprisoned by Iraqis 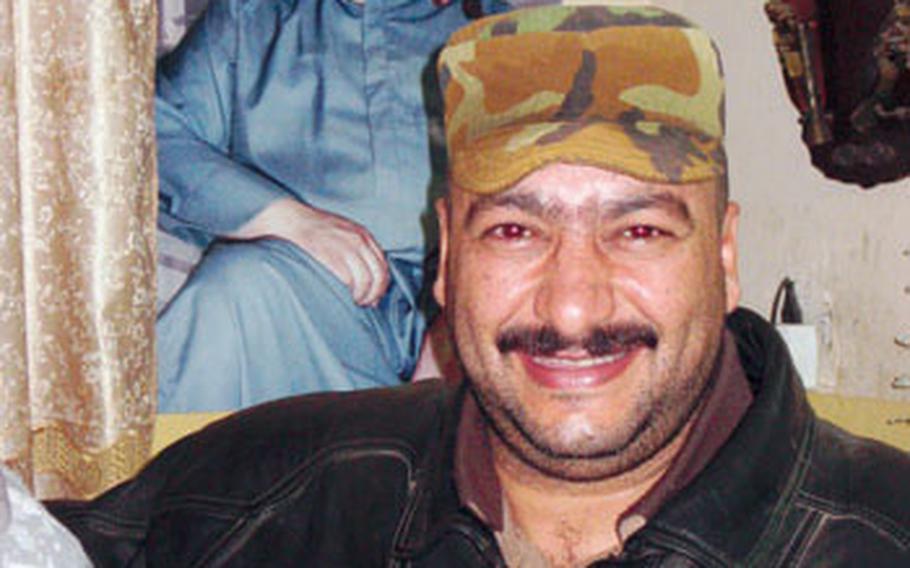 It’s unclear exactly what Adil al-Mashhadani did before partnering with U.S. forces in 2007 under the “Sons of Iraq” program. Some informants cast him as the Don of al-Fadhil, the east Baghdad neighborhood he ran in 2007 and 2008, taking what he wanted when he wanted it. Some U.S. soldiers on the ground said he sometimes alluded to fighting U.S. forces earlier in the war. He is now awaiting trial in Baghdad. (Courtesy of David Buckingham)

It’s unclear exactly what Adil al-Mashhadani did before partnering with U.S. forces in 2007 under the “Sons of Iraq” program. Some informants cast him as the Don of al-Fadhil, the east Baghdad neighborhood he ran in 2007 and 2008, taking what he wanted when he wanted it. Some U.S. soldiers on the ground said he sometimes alluded to fighting U.S. forces earlier in the war. He is now awaiting trial in Baghdad. (Courtesy of David Buckingham) 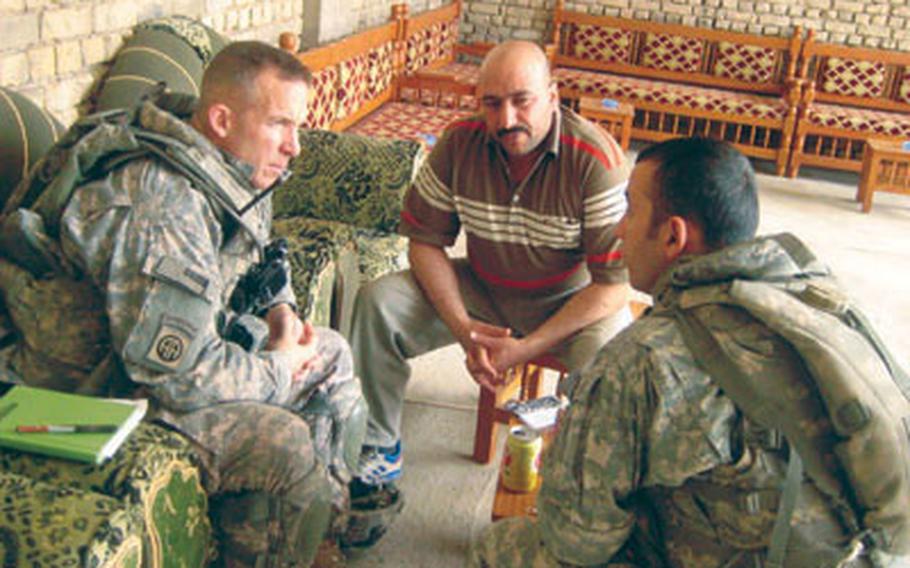 Adil al-Mashhadani, center, talks with 5th Squadron, 73rd U.S. Cavalry Regiment commander David Buckingham earlier this year. Al-Mashhadani was empowered by Buckingham’s predecessors in 2007 to help bring peace and stability to east Baghdad. The 5/73’s mission this year was to gradually remove him from power. That plan went up in smoke when the Iraqi government arrested him on March 28. (Courtesy of David Buckingham)

BAGHDAD &#8212; One short year ago, Adil al-Mashhadani was the self-styled Don of al-Fadhil, a U.S.-backed strongman ruling his own small slice of east Baghdad&#8217;s squalor where some 50,000 Sunnis make their homes.

Al-Mashhadani was &#8220;our guy,&#8221; a local militia leader empowered by the American military in 2007 to help stabilize his bloodied neighborhood and exert some form of Iraqi authority for the first time in years. And for awhile, U.S. commanders say, it worked &#8212; violence diminished and local commerce grew.

But last January 1, the record skipped. Under a new agreement between American and Iraqi officials, the Iraqi government gained more authority over security in the nation&#8217;s cities &#8212; and al-Mashadani fast went from valued American partner to wanted criminal.

Today, the middle-aged former warlord sits isolated inside a Baghdad prison cell, awaiting his day in court to answer charges that, as the leader of an insurgent Baathist cell, he partnered with al-Qaida terrorists and committed murder.

Yet the rise and fall of Adil al-Mashhadani reveals more than the fate of one obsolete militia leader. It&#8217;s a cautionary tale hanging over countless similar alliances of convenience struck by U.S. commanders in a desperate attempt to end Iraq&#8217;s bloodshed during an earlier phase of the Iraq war &#8212; deals that were brokered regardless of what men like al-Mashhadani might have done before, or what they might do afterward.

From remote villages along the Tigris River to wasteland slums and city centers, the U.S. military doled out millions of dollars to leaders like al-Mashhadani and the &#8220;Sons of Iraq,&#8221; homegrown militias formed during the &#8220;Awakening&#8221; movement and often manned by former insurgents.

But today, the newly assertive Iraqi government takes a far different view of these American-minted militiamen.

&#8220;Everything changed on the 1st of January,&#8221; said Lt. Col. David Buckingham, who leads the 5th Squadron, 73rd U.S. Cavalry Regiment, the last American unit that worked in al-Fadhil before the June 30 withdrawal of American forces from Baghdad.

The Ministry of the Interior picked up al-Mashhadani on March 28, triggering a two-day firefight pitting his staunchest followers against U.S. and Iraqi forces. But the story quickly evaporated in the next news cycle, and al-Fadhil has been relatively stable since, leaving only this question: Was al-Mashhadani vital cog in an improved Iraq, or was he merely a legitimized criminal?

It depends on whom you ask.

To the 1st Battalion, 504th Parachute Infantry Regiment, a &#8220;surge&#8221; unit that first allied with al-Mashhadani in 2007, he was a way out of the morass created by sectarian violence and foreign jihadists.

To the 3rd Squadron, 89th U.S. Cavalry Regiment in 2008, al-Mashhadani was a linchpin in keeping intact a precarious peace.

But to the 5/73 paratroops this year, al-Mashhadani was a dangerous loose cannon operating outside the Iraqi government&#8217;s authority.

Reconciling the Sons of Iraq

It remains unclear how the Shiite-dominated Iraqi government will deal with the remaining Sons of Iraq leaders and their men, particularly those groups composed of Sunni members. The situation is clearly volatile.

It&#8217;s critical, O&#8217;Hanlon asserted, that the Iraqi government provide Sons of Iraq members and their leaders with a clean slate moving forward, judging them not on past criminal activities but on their behavior since aligning themselves with the U.S.

&#8220;This is the time-tested approach to ending civil wars,&#8221; O&#8217;Hanlon said, before adding that al-Maliki also needs leeway to deal with those who committed crimes or terrorist acts.

Still, al-Maliki&#8217;s government must refrain from settling sectarian scores if he is serious about Sunni-Shiite reconciliation, O&#8217;Hanlon said.

In al-Mashhadani&#8217;s case, allegations of criminal behavior were often based on local informants, some of whom came with ulterior motives that left doubts about their credibility. Likewise, his guilt or innocence in an Iraqi court may come down to who is the most believable.

Capt. Dan Capozza was a lieutenant working in al-Fadhil in April 2007 when his unit first encountered al-Mashhadani.

The Sunnis there were warring with the surrounding Shiite neighborhoods, including nearby Sadr City. Many days, the rising sun revealed executed corpses lying in the street.

The U.S. soldiers believed al-Mashhadani operated in al-Fadhil, at times alongside al-Qaida members, and they tried to verify that relationship. But the locals wouldn&#8217;t give him up.

Capozza said that with his local gang decimated by one particularly vicious battle against U.S. forces, al-Mashhadani accepted an offer of alliance from then-1/504 commander Lt. Col. Carl Alex.

By May, the situation had started improving. Adjacent Shiite neighborhoods quickly partnered with U.S. forces as well. And by early June, al-Mashhadani&#8217;s men were the Iraqi authority in al-Fadhil. The U.S. military immediately flooded the neighborhood with money and civil projects.

In October 2007, al-Mashhadani survived a suicide attack, which prompted him to turn against his erstwhile al-Qaida allies. He led his men in a days-long battle against al-Qaida elements in al-Fadhil&#8217;s western mahallas, the labyrinthine alley mazes that snake through old Baghdad.

&#8220;[Al-Mashhadani] solved the security problem the old fashioned way: by killing and driving out [al-Qaida],&#8221; said Col. Craig Collier, who led the 3rd Squadron, 89th U.S. Cavalry Regiment there in 2008. &#8220;This was the critical first step in the eventual reconciliation with his Shia neighbors and the economic development that really took off a few months later.&#8221;

There were problems getting al-Mashhadani&#8217;s men better integrated with the Iraqi government. He was supposed to send some of his militiamen to the Shiite-dominated Iraqi police academy, but none showed up.

But by December 2008, local Iraqi army units were conducting missions with Sons of Iraq groups, according to Collier, and al-Mashhadani was liaising with government officials.

Shortly after their arrival last December, the 5/73 paratroops stopped patrolling alongside al-Mashhadani&#8217;s men, while gradually introducing Iraqi forces to the area.

As the U.S. distanced itself from al-Mashhadani, local informants began offering tips about the al-Fadhil leader&#8217;s criminal activities, said Buckingham, the commander on the ground in al-Fadhil this year. There were allegations of extortion and bomb-making. It was even suggested that he imprisoned men so that he could have sex with their wives.

And when the U.S. and Iraq signed the Jan. 1 security agreement, the 5/73rd was handed a new mission, Buckingham said: End the local Sons of Iraq program and empower of the Iraqi government in al-Fadhil.

&#8220;My impression was that outwardly, Mashhadani accepted this, but inwardly he expected to continue things for decades to come,&#8221; he said.

Relations quickly grew tense between al-Mashhadani and the 5/73 commanders. Rodriguez said al-Mashhadani would pointedly mention the years he spent fighting against American troops earlier in the war, and warn that the U.S. wouldn&#8217;t want him switching sides again.

But before he could make good on the threat, the militia leader was arrested by Iraqi authorities.

&#8220;He is more eloquent, passionate, and reasonable than his detractors are probably willing to admit, unless the [Iraqi government] has broken him,&#8221; Collier said in an e-mail. &#8220;Only a very foolish person would believe he&#8217;s pure as the driven snow &#8212; nobody over there is.