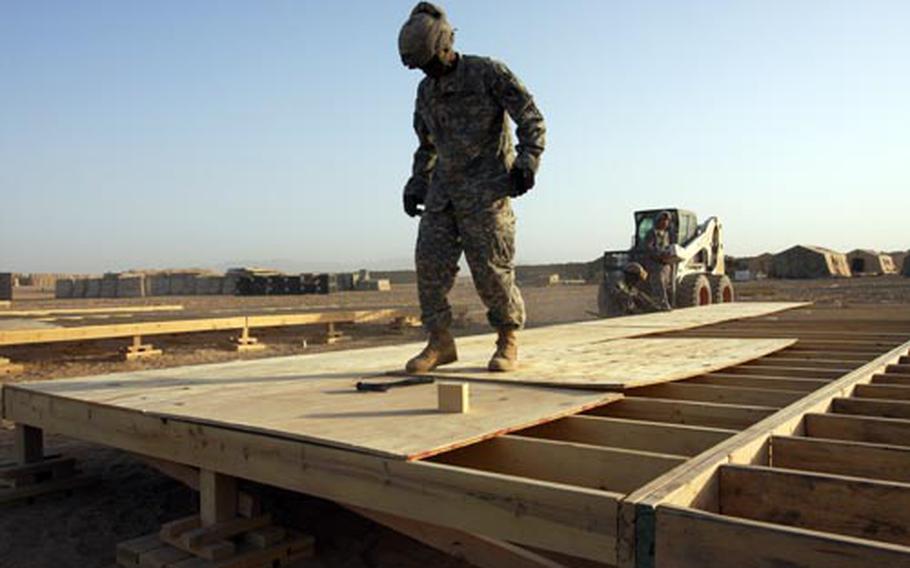 Sgt. Kenneth Kelly, of Detroit, maneuvers a sheet of plywood into place in September as he works on the flooring for a tent at Forward Operating Base Ramrod in Maiwand district, in Afghanistan’s Kandahar province. Kelly and other soldiers from Bravo Company, 62nd Engineers are building the base, which is the new center of operations for 2nd Battalion, 2nd Infantry Regiment. The battalion moved into the district to reinforce Canadian troops in Kandahar province, the heartland of the Taliban insurgency. (By Drew Brown/S&S)

KANDAHAR, Afghanistan &#8212; Most of the U.S. reinforcements slated for Afghanistan in the coming year will likely deploy to the southern part of the country, where they will join in the "main effort" in the fight against a resurgent Taliban, the commander of NATO-led troops in the region said.

In separate visits to Afghanistan earlier this month, Defense Secretary Robert Gates and Adm. Mike Mullen, the chairman of the Joint Chiefs of Staff, said the United States will send an additional 20,000 to 30,000 troops to Afghanistan over the next 12 to 18 months.

Most of those forces will deploy to Helmand, Kandahar and Zabul provinces, where the Taliban have increasingly targeted foreign soldiers, Afghan security forces and Afghan civilians with a relentless wave of bombings and other "asymmetric" tactics," said Maj. Gen. Maart de Kruif, commander of the International Security Assistance Force&#8217;s Regional Command-South.

The first of the U.S. troops are expected to deploy in May and June, with the effects of their deployment becoming visible on the ground later in the summer, de Kruif said in an interview earlier this week.

While plans have not been formalized, de Kruif said he and U.S. Gen. David McKiernan, the overall commander of international forces in Afghanistan, agreed that most incoming reinforcements were needed in southern Afghanistan.

"From a military point of view, it makes sense," he said.

The Pentagon announced Monday that a combat aviation brigade from the 82nd Airborne Division at Fort Bragg, N.C., would be among the first of those new units to deploy.

There are currently about 61,000 soldiers from 41 nations in Afghanistan. More than half are American, but they operate mostly in the eastern part of the country under a separate regional command.

Sending an additional 30,000 U.S. troops would almost double the American presence in the country, from its present level of about 31,000 troops to more than 60,000.

Violence by the Taliban, al Qaida and other militant groups in Afghanistan is at an all-time high, and 2008 has been the deadliest year for U.S. and other foreign troops since the U.S.-led coalition ousted the fundamentalist Taliban regime in 2001. Bombings, suicide attacks and assassinations have become an almost daily occurrence, and the Taliban and other groups now control large swaths of the countryside.

The U.S. reinforcements come as other countries are boosting their presence in southern Afghanistan.

Canada, which has about 3,000 soldiers in Kandahar province, has added an air wing consisting of transport and escort helicopters, unmanned aerial vehicles and C-130 cargo planes.

Britain, which has about 8,000 soldiers in the country, including 4,500 locked in bitter daily fighting in Helmand province, is sending several hundred additional troops. Romania is sending an extra rifle company, de Kruif said.

There are currently about 20,000 foreign soldiers in southern Afghanistan. De Kruif said he expects that number "will probably double" over the coming year.

The United States currently has only a small number of forces in southern Afghanistan.

These include a U.S. infantry battalion operating as part of the Canadian task force in Kandahar province, a separate force of about 2,000 Marines operating in Helmand province and Farah province, and small teams of Army National Guard soldiers working as advisers to the Afghan police.

De Kruif said international troops have made significant strides in the past year training the Afghan national army and police units.

"Although we have a tough fight, we have been able to gain ground," he said.

De Kruif said about 2,000 Dutch troops operating in Uruzgan province, which borders Kandahar province to the north, have killed or captured most of the significant Taliban leaders in the province, which has enabled construction and other aid projects to move forward.

"The situation in Uruzgan is completely changed from a year ago," he said.

The general said the Taliban have also switched from engaging foreign soldiers in direct combat to using more roadside bombs and other unconventional tactics. But most of the bombing victims have been Afghan, which is turning popular support against the Taliban, he said.

The Afghan Independent Human Rights Commission released two reports Tuesday, one of which accused the Taliban and other anti-government forces of "widespread and systematic violations against civilians with a(n) aim to weaken the government."

These attacks have caused schools and medical clinics to shut down and have caused international aid groups to stop work in many areas of the country, the group said.