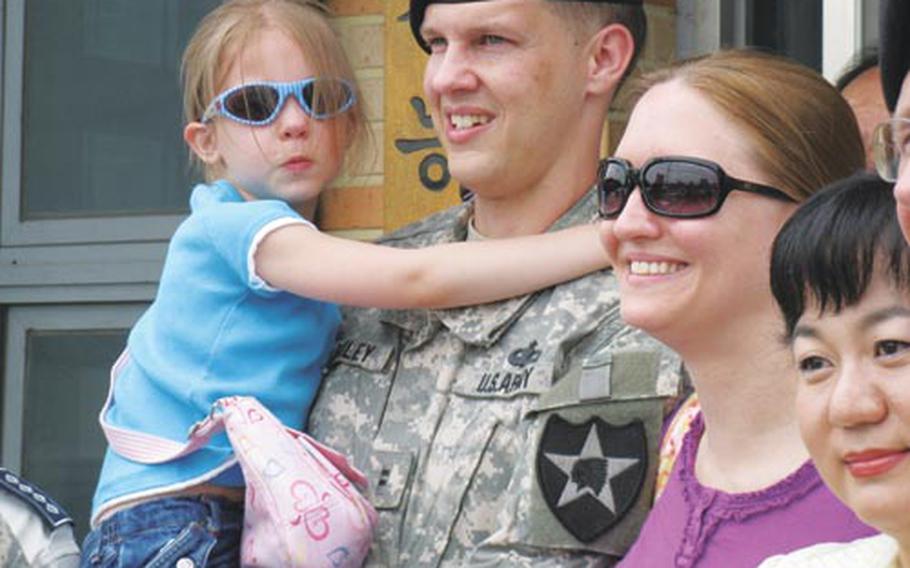 Krista Bailey, 5, hugs her father, Chief Warrant Officer 2 Michael Bailey, outside Ganeung police station in Uijeongbu on Thursday. Next to them are Krista&#39;s mother, Danialle Bailey, and Im Su-jung. Im found Krista Bailey alone on a Uijeongbu city bus and brought her to the police, who then notified the family. (Erik Slavin / S&S)

Mommy says to get to school, I get on the school bus.

Mommy is in the shower. I&#8217;m going outside. I can find the school bus myself.

Krista walked outside the Camp Red Cloud barracks and blended in with a group of people leaving the base. When the light turned green, she crossed the street.

She saw a bright bus with children painted on the side, but the bus driver said she couldn&#8217;t board.

It was scary. After a while, Krista cried.

Im was riding the bus home when she heard Krista yelling, "I want to go school."

She approached, but Krista said she wanted to be left alone.

Krista knows she&#8217;s not supposed to talk to strangers.

But Im wasn&#8217;t about to abandon a crying little blonde girl who doesn&#8217;t speak any Korean.

Meanwhile, back at Camp Red Cloud, Michael and Danialle Bailey searched frantically for their daughter.

Around 2:45 p.m., Michael Bailey called the military police, who ordered searches of all vehicles leaving the base.

Speakers throughout Camp Red Cloud announced that a 4-year-old girl wearing a pink jacket, blue jeans and white shoes was missing. Soon after, Michael Bailey received a call from a friend who said Krista was seen walking off post.

A few minutes later, patrol cars were looking for her all around Uijeongbu, a city of about 400,000 people, though they concentrated on the downtown and base areas.

At 4:10 p.m., Im phoned the police after getting off at the next stop. A patrol car in the neighborhood arrived soon after and took Krista back to her parents.

Military police asked Krista for a statement. She drew them a picture of the other people on the "school bus."

"She walked through, but with other adults," said Provost Marshal&#8217;s office Sgt. Maj. Russell Orlowitz. "They probably assumed she was with somebody."

Danialle Bailey said she would have thought the same thing. She thanked the police Thursday for their help in ending her worst nightmare and hugged Im.

"We were so relieved," she said.