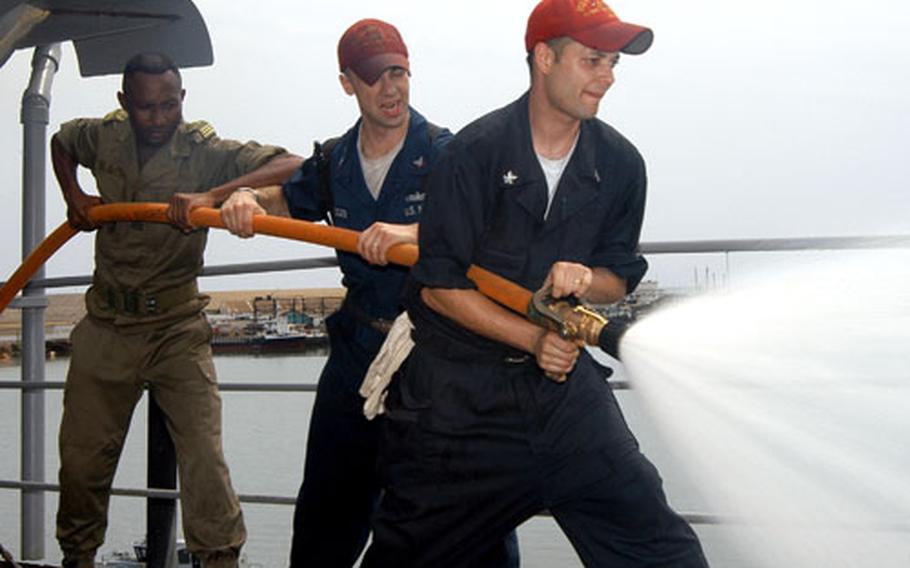 Sailors assigned aboard the submarine tender USS Emory S. Land, along with a member of the Congolese military, practice firefighting techniques. The Land and the USS Carr are wrapping up a two-month deployment to the Gulf of Guinea. (Jonathan Kulp / Courtesy of U.S. Navy)

Sailors from the frigate USS Carr and the La Maddalena, Italy-based submarine tender USS Emory S. Land are finishing a two-month deployment to the West African region with a port visit in Dakar, Senegal.

The crews of the Land and the Norfolk, Va.-based Carr, plus Navy construction battalion personnel &#8212; Seabees &#8212; and a team of hydrographic experts, have visited more than a half-dozen countries during the deployment.

The cruise was designed to accomplish a number of things: increasing maritime security in the oil-rich region; training sailors in and improving the nations&#8217; navies; and building relationships with various governments and peoples.

While Rowden and other senior military officials were working with regional leaders to bolster U.S. military presence in the region, the ships&#8217; crews, Seabees and hydrographic teams were working at building relationships on a sailor-to-sailor level.

He said the deployment has shown him how much the individual sailor has a role in improving overall relationships between nations.

In the African nation of Angola, Rowden said, he was invited to attend church services.

The pastor, a personal friend of the country&#8217;s president, told his more than 1,900 parishioners about the community relations projects the Land sailors were working on.

Also in the congregation, he added, were 15 associate pastors, each of whom took that message to their own congregations.