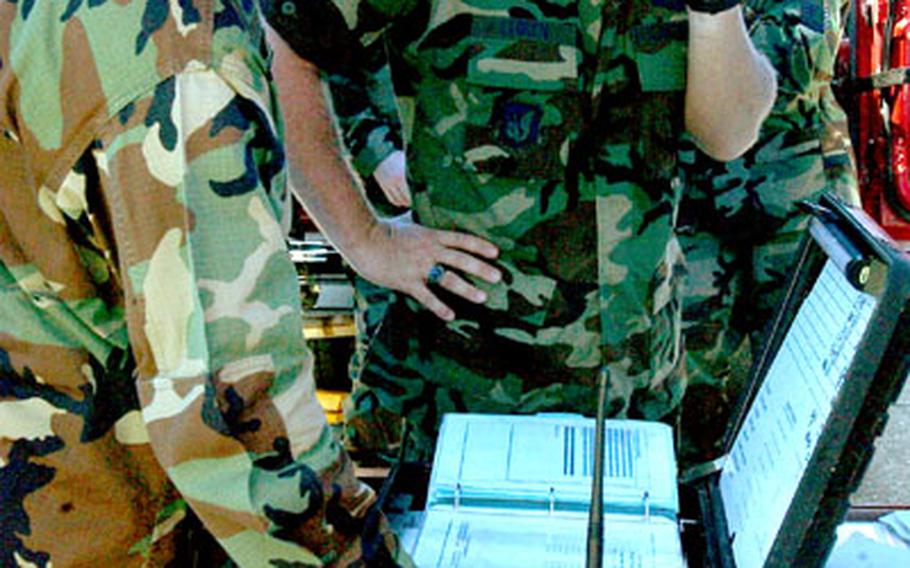 YOKOTA AIR BASE, Japan &#8212; The call came in just after 8 a.m. Tuesday: An airplane had just gone down on base.

Police, fire and ambulance crews raced to the scene, which appeared grim and dire. Scores lay injured, including both those who&#8217;d been on the plane, and on the ground an unknown number were dead.

In this instance, though, it was only a test &#8212; a quarterly review of Yokota&#8217;s ability to confront a serious incident.

About 150 people took part in Tuesday&#8217;s major-accident response exercise, according to Lt. Col. Martin Granum, who served as the on-scene commander. Emergency responders tackled the three-hour planned drill with assistance from numerous other base agencies, including the 374th Operations and Maintenance squadrons.

The practice sessions are conducted for two reasons: Yokota officials want to sharpen emergency response, using their medical, fire, security forces and readiness personnel. And they also get a chance to test the base&#8217;s command and control function, which includes senior wing leadership and several different organizations, Granum explained.

On Tuesday, word of a plane &#8220;crash&#8221; reached Yokota&#8217;s command post at 8:05 a.m., said 1st Lt. Warren Comer, a base spokesman. With temperatures hovering in the upper 90s, immediate-response teams were dispatched to the site, where medical personnel handled triage, performed lifesaving treatments and prepared patients for transfer to the hospital.

Emergency responders dealt with 25 &#8220;casualties&#8221; in the exercise, including some fatalities, Granum said.

Officials briefly shut down both ends of Yokota&#8217;s runway during the exercise. Base traffic was halted for about 30 minutes on the north and south overruns.

Maj. Heidi Kjos, a flight surgeon who acted as the on-scene medical commander Tuesday, said routine rehearsals are critical in shaping the chemistry of emergency personnel.

A few difficulties arose throughout the morning, Granum said, the &#8220;normal confusion&#8221; one might expect in an emergency of this magnitude.