Embattled A-10s get upgrades to enhance search and rescue 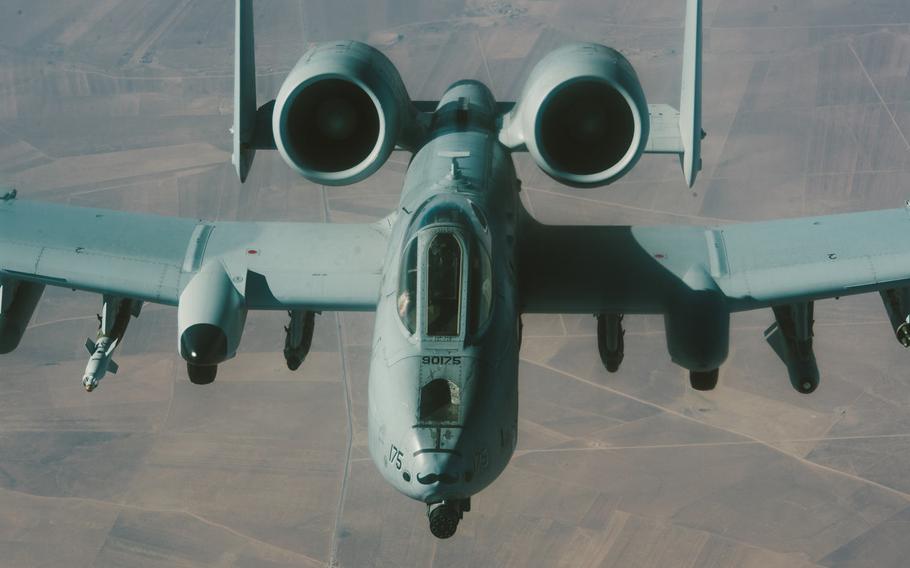 An A-10 Thunderbolt II flies over Iraq, Nov. 29, 2016. Even as the future of the A-10 hangs in the balance, nearly two dozen Warthogs recently received upgrades to enhance their combat search and rescue capabilities, a need described as “urgent” by one Air Force official, according to an Air Force statement. (Jordan Castelan/U.S. Air Force)

KAISERSLAUTERN, Germany — Even as the future of the A-10 hangs in the balance, nearly two dozen Warthogs recently received upgrades to enhance their combat search and rescue capabilities, a need described as “urgent” by one Air Force official, according to an Air Force statement.

A new recovery system has been installed on 19 A-10C Thunderbolts assigned to Davis-Monthan and Moody Air Force bases in the United States in the past three months, the Air Force said in a statement Friday.

Called the LARS V-12, the system is designed to allow A-10 pilots to better communicate with downed pilots, pararescuemen and joint terminal attack controllers. It provides pilots with ground personnels’ GPS coordinates and enables them to communicate by voice or text, the Air Force said.

“This urgent operational need arose in August (2016),” Timothy Gray, acting director of the 309th Aircraft Maintenance and Regeneration Group at Davis-Monthan, was quoted as saying.

Gray said that Air Combat Command and the A-10 Program Office asked whether Gray’s unit could outfit 16 aircraft with the upgrade by mid-December of 2016.

The Air Force did not say whether additional A-10s would be outfitted with the new system.

Earmarked by the Air Force several years ago for the chopping block to make way for the multirole F-35, the A-10 — which entered service four decades ago — has seen its stock rise in the U.S. fight against the Islamic State.

More than 700 A-10s of all models were built. Since the end of the Cold War, large numbers of Warthogs have been mothballed or transferred to Air Guard and Reserve units.

Defense Secretary Ash Carter said in February that the Air Force would defer the A-10’s retirement until 2022, saying the aircraft “has been devastating to ISIL from the air.”

The Defense Department has said it will replace the A-10 with F-35 Joint Strike Fighters on a squadron-by-squadron basis. But the plan could be in jeopardy under the new administration, as President-elect Donald Trump recently criticized the F-35’s cost.

The A-10 is particularly adept at close-air support, able to fly low and slow while attacking ground targets with precision. The plane, which carries a nose-mounted General Electric GAU-8 30 mm cannon that has proven devastatingly effective against ground targets, flies regular combat missions against Islamic State forces in both Syria and Iraq.