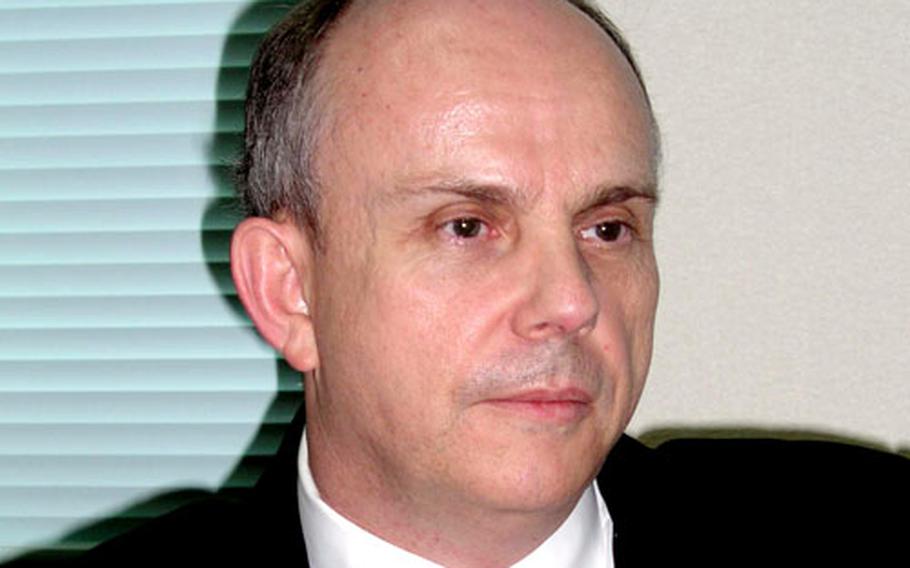 Joseph R. Donovan Jr., deputy chief of mission at the U.S. Embassy in Tokyo, speaks to reporters Thursday before completing his three-day tour to Okinawa, the first visit to the island since he assumed the post in August. (Chiyomi Sumida / S&S)

URASOE, Okinawa &#8212; A top official with the U.S. Embassy in Tokyo on Thursday maintained the U.S. position that no changes are foreseen for the controversial U.S.-Japanese report about realigning U.S. military forces in Japan.

&#8220;I certainly do not expect any changes,&#8221; Joseph R. Donovan Jr., said during his first visit to Okinawa as deputy chief of mission at the U.S. Embassy in Tokyo. Donovan assumed the post in August.

The realignment report includes a plan to transfer about 7,000 Marines, almost half of those currently on the island, out of Okinawa, and move the III Marine Expeditionary Forces headquarters from Camp Courtney to Guam.

But aspects of the the plan &#8212; agreed to in October and to be made final in March &#8212; have generated strong opposition on Okinawa.

Japanese officials since have characterized it as an &#8220;interim&#8221; document &#8212; a stance rebutted by Defense Secretary Donald Rumsfeld.

In November, he also asserted there would be no changes.

Donovan said, &#8220;What I would hope is that people of Okinawa consider that this is a very real opportunity, almost historical opportunity, to realize significant realignment of our base posture on Okinawa.

&#8220;The repositioning is to prepare both the United States and Japan for challenges in the future and also to reduce the burden on local communities,&#8221; he said, adding, &#8220;We worked very hard on that.&#8221;

The move, however, does not change the U.S. commitment in defending Japan and the region, said Donovan, who spoke to reporters at the U.S. Consulate on Okinawa before wrapping up his three-day tour to the island.

&#8220;The message we send is that the U.S.-Japan security alliance is healthy, active and prepared for the challenges for the future.

&#8220;It is a very positive message that our relations are strong and forward-looking.&#8221;

He said the embassy would continue to work closely with the Defense Facilities Administration Agency, a Japanese government agency in charge of U.S. military installations.

&#8220;To the best extent, we provide information so that local communities would understand what is happening,&#8221; Donovan said.