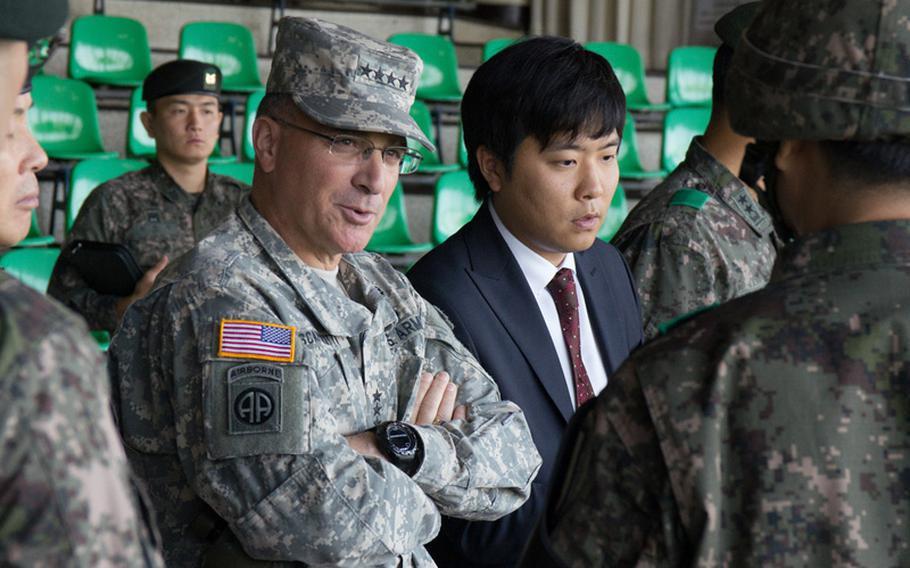 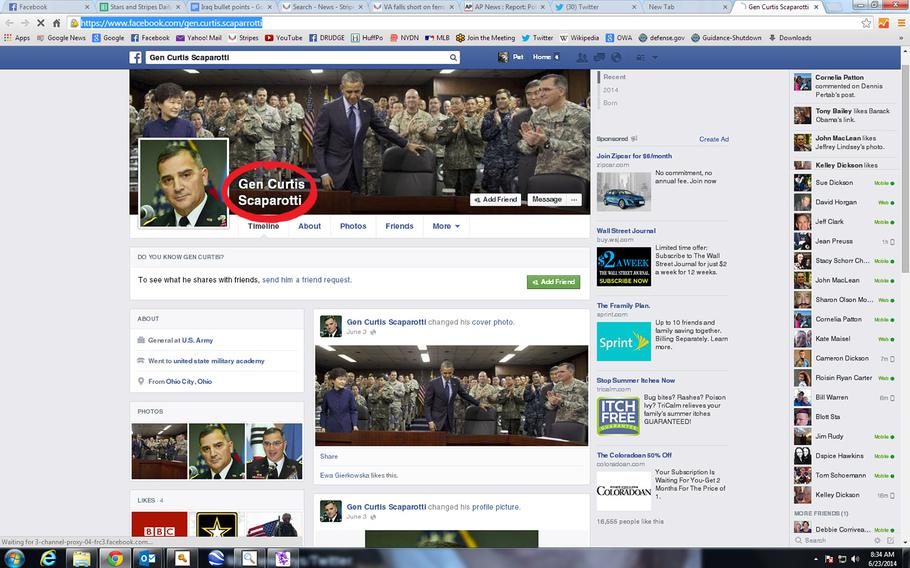 Internet scammers have long used military members' identities to attract victims. Here, in this screenshot from Facebook, they have taken the identity of the U.S. Forces Korea commander, Lt. Gen. Curtis Scaparrotti, whose name they misspelled. ()

WASHINGTON — The commander of U.S. Forces Korea appears to be one of the newest military victims caught up in what investigators call the romance scam.

Online scammers have sent out emails to women impersonating Gen. Curtis “Mike” Scaparrotti and pointed potential targets to a false Facebook profile page, which features the general’s name misspelled and some profile photos gleaned from the web.

Army Chief of Staff Gen. Ray Odierno, retired Gen. Stanley McChrystal and servicemembers killed in combat have also had their identities stolen and used in similar ruses in the past.

The email, obtained by Stars and Stripes, touts Scaparrotti’s “key leadership positions” in the military including the current USFK command position and a post at U.S. Central Command, and claims that, “Once you let me into your life, you’ll find me very interesting, fun, and a good man to have as a friend and a companion.”

Recipients are assured to “feel free with me” and then asked about their jobs, where they live, and whether they own a home.

USFK officials said they were aware of the situation, referring all questions to the U.S. Army Criminal Investigation Command.

The ploy is all too familiar to CID, which receives hundreds of reports each month of online con artists hijacking servicemember identities and using them to defraud unsuspecting people — usually women — who are hoping to find love and romance on the Internet.

“The majority [of the romance scammers] are operating out of cyber cafes and homes in West African countries … There are hundreds of them doing this,” said Chris Grey, spokesman for CID in Quantico, Va.

Often they route their email accounts through other locations around the world, making them virtually untraceable, and work out of Internet cafes that allow anonymous patrons to pay for a connection by the hour, according to CID.

Impersonating a military officer is a crime but stealing the identity of enlisted servicemembers — some who died in Afghanistan and Iraq — is a common tactic of African scammers that is not illegal.

The fact that the romance scams usually involve perpetrators and victims who are not in the military or not even U.S. citizens has also complicated the cases for the Army. As cases have multiplied, the FBI and the Federal Trade Commission have both gotten involved in cracking down on the Internet fraudsters.

“Catching them is nearly impossible, so we figured education is the best course of action,” Grey said.

The CID has a special web page dedicated to the warning signs of the romance scam.

Perpetrators typically approach potential victims with emails that make spelling and grammar errors, profess love too quickly, or ask victims to send money, sometimes through the mail to Africa, according to the agency.

In the Scaparrotti email, the writer asks for revealing financial information and tells the recipient together they can “reach greater heights in life than we even expect to.” Then the scammer warns that the correspondence should be kept secret.

“Please be informed that for security reasons due to the nature of my job, you have to keep our constant communication very confidential to you,” it says. “We will be exchanging emails regularly and chat a little when I have some time or little break from work. The nature of my job is so demanding and requires lots of my time.”

Grey said many are taken in by the email come-ons and the stories of victims are often heartbreaking. Some are defrauded out of thousands of dollars — in one case, a women lost $78,000 — before realizing it was a sham, Grey said. Others refuse to admit they have been scammed at all and still want to meet up with the Internet personas whom they loved.

“In the last two to three years, I have personally talked to thousands of women,” he said.

The Scaparrotti email was sent to a female law student in Brazil, who contacted Stars and Stripes.

The woman said the scammers approached her on Facebook and then sent an unsolicited email.

“I have some experience of life and know nothing extraordinary comes for free,” she wrote in an email translated from Portuguese. “After analyzing the facts I wondered, how can a senior official of the U.S. military be interested in a woman whose life he knows nothing about.”

Victims also include the servicemembers whose identities are stolen. One way to avoid the scam is to keep a close eye on personal and professional information online, according to CID.

“We put out warnings all the time for people to protect their identities,” Grey said.

If romance scammers do steal a servicemember's identity, CID can go to social media and online dating sites and ask that fake profiles be taken down. Some websites have even created new screening procedures for members claiming to have served.

But the scammers are relentless. Even after profiles are pulled down, the reality is “within 15 minutes, 15 more will pop up” because it is so profitable, Grey said.

On Monday, the Scaparrotti Facebook page was still up and USFK was not immediately available for comment. But Grey said CID agents who had taken up the case would contact the command and work to have the fake profile taken down.