Worshippers stand for the procession of a Thanksgiving Eve service hosted by local Air Force communities inside the historic Ely Cathedral. The service dates back to World War II when British neighbors invited American troops to use the cathedral as a place of worship on the American holiday. (Sean Kimmons / S&S)

Worshippers stand for the procession of a Thanksgiving Eve service hosted by local Air Force communities inside the historic Ely Cathedral. The service dates back to World War II when British neighbors invited American troops to use the cathedral as a place of worship on the American holiday. (Sean Kimmons / S&S) Rows of pie slices wait to be served to those who attended a Thanksgiving Eve service inside the historic Ely Cathedral. (Sean Kimmons / S&S) 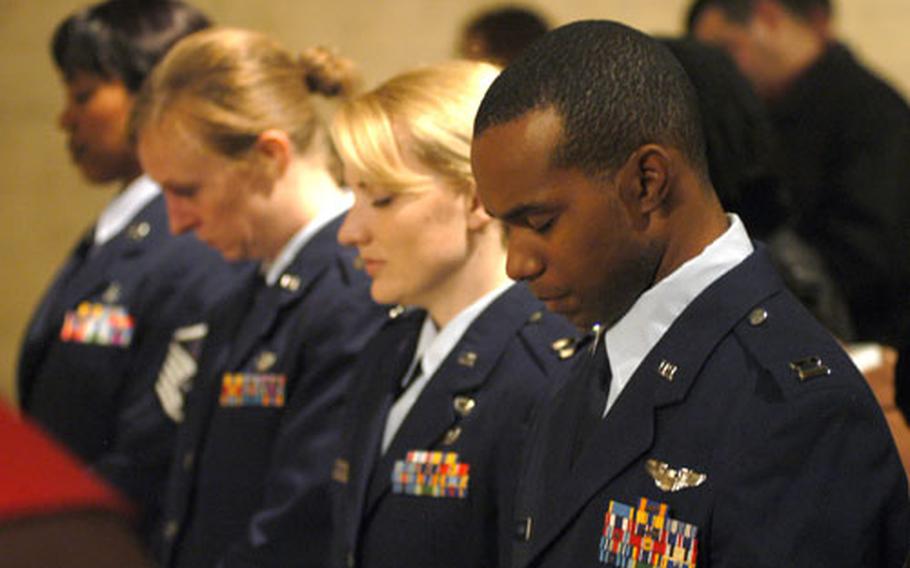 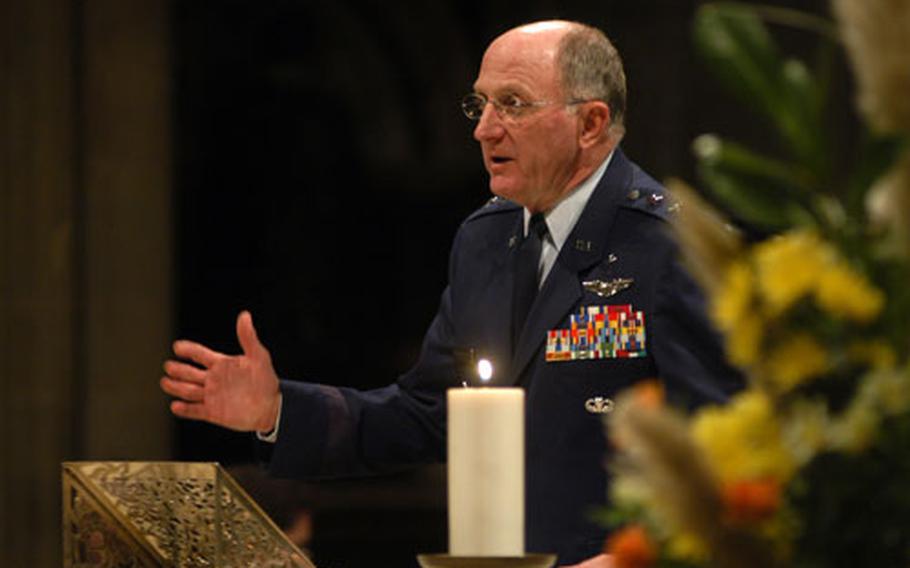 ELY &#8212; Airmen flanked by family members continued a long tradition in this country last week by participating in a Thanksgiving Eve church service inside the historic Ely Cathedral.

The tradition dates to World War II when the country was inundated with U.S. troops serving at nearby bases. As a way of showing gratitude, local Brits invited them to use the cathedral as a place to thank God for his blessings on the American holiday.

The Thanksgiving Eve service draws an average of 1,200 worshippers every year.

Widely known as the Ship of the Fens, the cathedral stands tall over the surrounding flat countryside and its lantern can often be seen glowing at night.

The key speaker, Chaplain (Maj. Gen.) Charles C. Baldwin, the Air Force&#8217;s chief of chaplains, went out of his way to fly from Washington, D.C., to take part in the hourlong service.

He asked the worshippers to thank God, no matter what religious denomination they were.

&#8220;We give him thanks for who he is and what he has done,&#8221; said Baldwin, who added that those present should be thankful for the freedoms of both countries and for their families, too.

He then offered three reasons to give thanks.

First, giving thanks turns fear into faith as fear can be a crippler.

Second, giving thanks turns strangers into friends. To do this, Baldwin suggested that one should be thankful to people they don&#8217;t know wherever they go, such as someone helping them at a store.

And finally, giving thanks turns pain into purpose since pain is something that cannot be avoided in life.

Following the service, worshippers were welcomed to mingle and enjoy the 150 Thanksgiving pies donated and purchased for the occasion.

&#8220;It&#8217;s such a rich heritage in the Air Force community that I just wanted to be a part of this service one more time,&#8221; Baldwin said in the middle of the socializing crowd. His first visit to the cathedral was three years ago.

As a veteran of many religious services, Baldwin thought this one is quite unusual since worshippers of many faiths came together inside of a British cathedral.

Before leaving, Senior Airman Brian Ax, a computer maintenance technician for the 488th Intelligence Squadron, said he attended the service for two reasons.