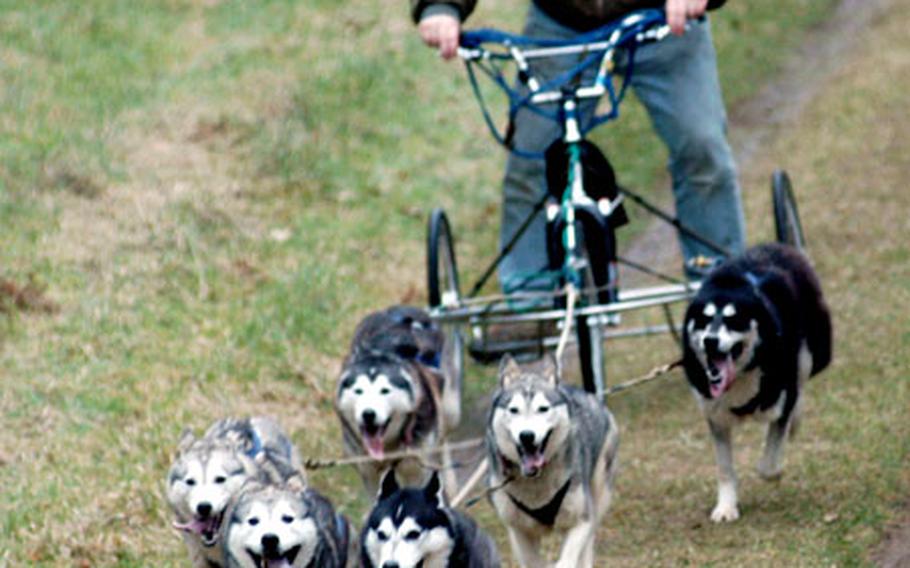 Running at pace on the first half of the six-dog race course in Elveden Forest recently, the dogs of Andrew Grisbrooke&#39;s team pull him toward a third-place finish for the day. (Ben Murray / S&S)

Running at pace on the first half of the six-dog race course in Elveden Forest recently, the dogs of Andrew Grisbrooke&#39;s team pull him toward a third-place finish for the day. (Ben Murray / S&S) In order to keep her calm before a race and prevent her from tiring herself out by tugging at the harness before starting time, musher Tim Hart holds on to Tallulah, the lead dog for a friend&#39;s team. (Ben Murray / S&S) 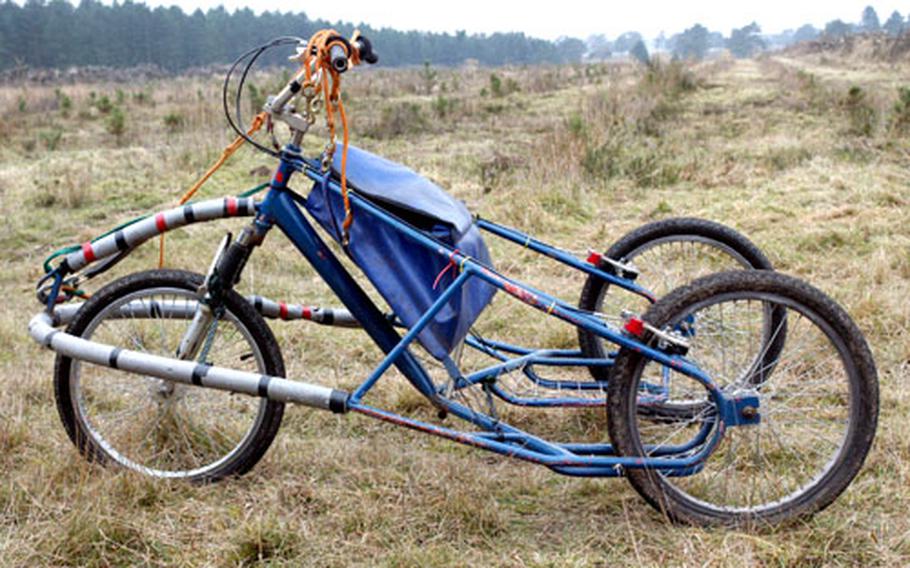 One of the "rigs" used by English husky racers. (Ben Murray / S&S) 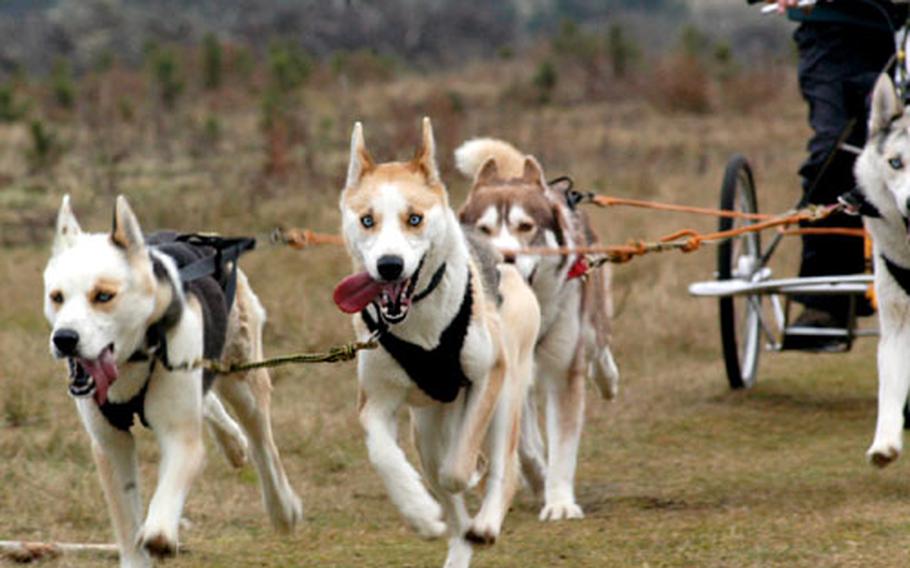 Siberian huskies keep their eyes on the finish line in the final yards of the four-dog races at a recent British Siberian Husky Association race in Elveden Forest. (Ben Murray / S&S) 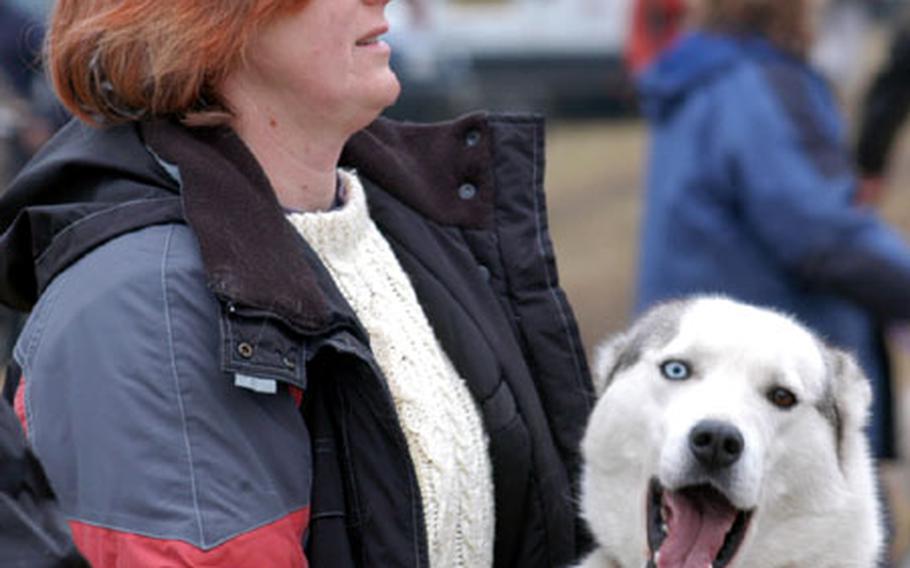 ELVEDEN FOREST &mdash; The top dog teams at the British Siberian Husky Racing Association&rsquo;s recent event just off RAF Lakenheath pulled their drivers around the course at 28 mph or better. At that speed, you sure don&rsquo;t want your sled to get a flat.

While it&rsquo;s not a concern a traditional musher might have in a competition, driving dogs across the pitiless tundra, this is not your typical dog-sled race.

Held on wooded trails often just a short distance away from U.S. air bases in England, British husky racing is a peculiar sport that contains almost all the major elements of the typical, Iditarod-style event except for one fundamental element: snow.

It&rsquo;s a basic absence that defines husky racing in England. Instead of using long, ski-shod sleds hauled by teams of 16 dogs for days on end, the British riders race on small, three-wheeled vehicles pulled around tracks that top out at just over four miles long.

But the fact that it exists at all, especially within earshot of U.S. bases, is often a surprise to American servicemembers, said Alan Blunt, a civilian truck driver for the 48th Logistics Readiness Squadron at Lakenheath, who races huskies.

&ldquo;They&rsquo;re generally interested that you&rsquo;d be chased around a field by dogs,&rdquo; Blunt said of people he tells on base about his hobby. &ldquo;They don&rsquo;t understand.&rdquo;

But husky racing is a sport that&rsquo;s been growing in popularity in the past 20 years, said breeder and racer Sharon Vingoe.

Several husky racing leagues now exist around England and Scotland, and the Elveden Forest event &mdash; where dozens of teams showed up to compete Feb. 4 &mdash; wasn&rsquo;t the only one taking place that weekend, she said.

Mushers said the sport is basically the same as traditional racing in many ways.

After a course is laid out in a forest or rural area, dog teams leave the starting gate in two minutes, trying to get around the track in the fastest possible time.

Dogs are controlled by the traditional voice commands (&ldquo;gee&rdquo; to turn right and &ldquo;haw&rdquo; for left), and have to be pure-bred huskies to be entered in a race. There are separate events for dog teams of different sizes, from the six-dog maximum right down to the single-dog events, where drivers are pulled along on two-wheeled scooters.

As for the dogs themselves, they are stereotypically husky, said racer Sindy Ratani. Displaying a never-ending range of personality, they are small but powerful, tightly wound and extremely eager to do one thing: pull.

Indeed, when dogs are brought near the starting line at Elveden, many get so anxious they can barely be held in check, jumping against their leashes and making strained, half-whining, half-howling noises.

And the pandemonium doesn&rsquo;t stop out on the trail, either, drivers said. Huskies often are frenzied with excitement and easily distracted while running, and will chase a deer or a rabbit right off the trail if it crosses their path.

Drivers can lock up the hand brakes when the team goes awry, but against a strong team of dogs it can come to no avail, racers said, and mushers have been known to be hauled off into the wilderness by their teams.

&ldquo;One lady tipped over last year. She sort of got dragged for half a mile,&rdquo; one driver said.

Still, attending a race can be a unique day out for a dog lover or spectator, Blunt said, though no Americans have accepted his invitation to a race.

Though it&rsquo;s gaining in popularity and competitiveness, it hasn&rsquo;t gotten big enough yet to be exclusive, Vingoe said, and most trainers are happy to talk about their teams.