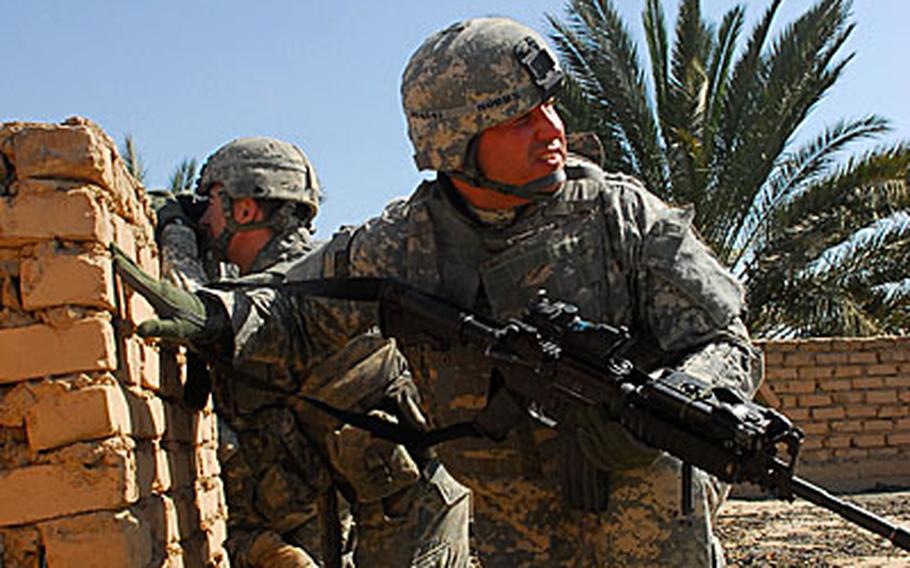 Capt. Brendan Hobbs, 31, of Tampa, Fla., takes cover behind a rooftop wall after a burst of enemy gunfire south of Baghad on Monday. (By Monte Morin / S&S)

Moon-lit grass rippled and thrashed over the landing zone as Pfc. Tim Cottingham dialed open his seat belt and jumped from the belly of a pounding Black Hawk.

Weighed down by body armor, ammunition, an M-4 Carbine and a freshly oiled M-14 rifle, the 21-year-old Lockwood, Mo., native felt his boots sink ankle-deep in wet earth. He slogged ahead several paces before slamming himself down into a prone firing position.

As the rest of Cottingham&#8217;s chalk dove into the beating grass, the helicopter gunned its engines, lifted itself into the night sky and faded from view. The soldiers of 2nd Platoon, Company C crouched in silence, surrounded by cool, still grass.

Their objective lay just 200 yards ahead.

Sniper Dude and his cohorts were fingered in a string of kidnappings, three beheadings, a series of rocket attacks on Baghdad International Airport and the planting of numerous roadside bombs. Sniper Dude himself ran his own &#8220;training school,&#8221; teaching teenage recruits how to snipe from the cover of animal pens.

Trouble was, Sniper Dude lived in a farmhouse on the far edge of the unit&#8217;s area of operations &#8212; a sparsely populated expanse of lush farmland several miles south of Baghdad. The entire area was carved up by a maze of musty irrigation canals that hampered movement by foot or vehicle.

Whenever U.S. and Iraqi units tried to capture him, he managed to slip away. This time, the commander of Company C, 2nd Battalion, 14th Infantry Regiment hoped to get the drop on him.

The immediate forecast was for 60 percent illumination, with a 100 percent chance of sporadic small-arms fire after sunrise.

The plan itself was for the 10th Mountain Division soldiers to seize Sniper Dude&#8217;s farmhouse with him inside, establish a patrol base and then search two dozen surrounding homes for weapons with soldiers from the 4th Brigade, 6th Iraqi Army Division.

As Hobbs and an initial element stormed the farmhouse Monday morning, a second group lugged an enormous human remains pouch filled with water, ammunition and other supplies. Soldiers call this particular form of air assault luggage a &#8220;body bag speedball.&#8221;

Close to homeThe air assault had been in the works for some time, but the operation took on an added significance just before its launch.

Less than 12 hours before the helicopters took off, a roadside bomb killed a Company C soldier from another platoon.

The bomb was along a notorious stretch of roadway near the company&#8217;s patrol base. The prime suspect in the deadly attack was Sniper Dude&#8217;s cell.

Before 2nd Platoon boarded their helicopters, a chaplain apologized to them for their loss and offered a prayer for their safety.

First timersHelicopter-borne raids, or air assaults, are relatively rare in Iraq. Soldiers can spend an entire deployment without ever stepping onto a helicopter. This mission was 2nd Platoon&#8217;s first ever air assault.

&#8220;How many of you have never flown on a Black Hawk before?&#8221; Sgt. 1st Class Michael Henry asked his platoon the night before the mission. Out of the three dozen men, at least five hands shot into the air. The 35-year-old platoon sergeant and former Ranger instructor from Tully, N.Y., swept the room with his eyes. &#8220;Wow,&#8221; he said.

In house after house, they asked about Sniper Dude.

By the time the sun had risen, the Iraqi and U.S. soldiers had detained three men, but discovered no weapons caches. The closest they came was a packing crate for a French-made Roland surface-to-air missile. A farmer had found the long, narrow case and used it as a watering trough for his cows.

As the day wore on, Hobbs and his soldiers kept watch from the farmhouse roof, joking and peering through spotting lenses. At around 2 p.m., the gunfire started, just as Hobbs had predicted. Three short bursts from an AK-47, then an explosion off in the distance. The soldiers braced for an attack, but it never came. After more than half an hour of silence, it was clear the enemy had packed up and left.

As night began to fall, the soldiers policed up their trash and readied themselves for the helicopter ride back to Baghdad. They&#8217;d continue their search for Sniper Dude another day.