Elmo and friends entertain at Aviano 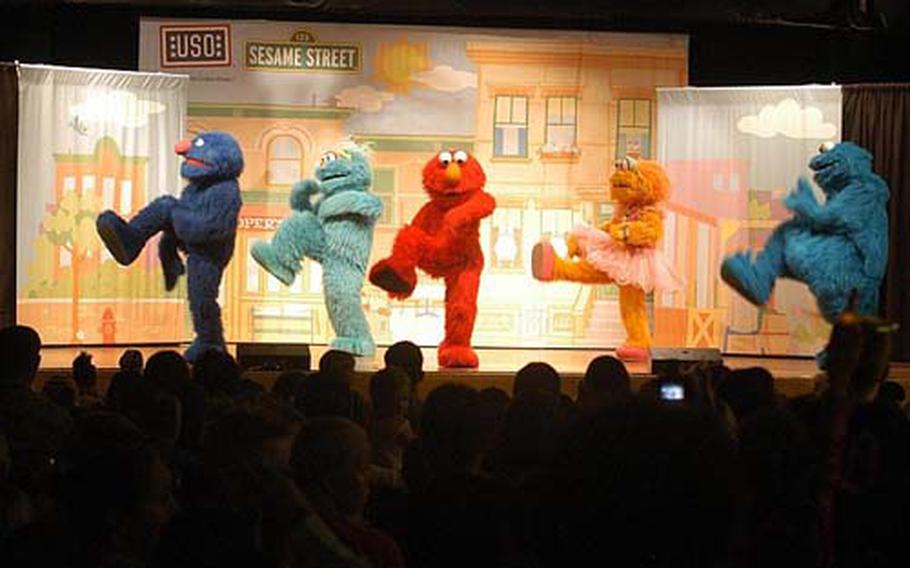 Characters from “Sesame Street” took some time off from their busy television schedule to entertain families at Aviano Air Base with a half-hour USO show. (Kent Harris / S&S)

Characters from “Sesame Street” took some time off from their busy television schedule to entertain families at Aviano Air Base with a half-hour USO show. (Kent Harris / S&S) The audience didn&#39;t need a lot of encouragement to participate. (Kent Harris / S&S) Crew Woods, 3, is all smiles after his mother, Dayna, helped him don a USO bandana before the “Sesame Street” show at Aviano Air Base, Italy. Mom was busy, also fitting Kai Christy, left, and watching over two other sons — Asher, 6, and Kabe, 8 — not pictured. (Kent Harris / S&S)

AVIANO AIR BASE &#8212; The United Service Organizations has been organizing overseas tours for U.S. troops for decades. But it might be hard to find one that has been met with such fervor among a certain segment of U.S. military communities overseas as the show currently performing in Italy.

One show last week at Aviano &#8212; the third that day for the 14 performers, stagehands and organizers &#8212; resembled a rock concert in several respects. Dozens of kids and parents were lined up hours before the show started. The show featured plenty of singing (and dancing). And, thanks to hundreds of Elmo Spin Lights handed out at the door, those in the audience could hold up lights to show their appreciation to the performers.

Not that such appreciation was in doubt.

&#8220;It&#8217;s fun,&#8221; said Kabe Woods, 8, who had a seat in the front row. Like many of the younger attendees, he had seen a performance during the school day, but was ready for more. Elementary students were joined by their parents and younger siblings for a special night performance at the school.

The half-hour show features a series of songs and dances, with much of the theme centering on how kids can deal with their military parents&#8217; deployments. Organizers also handed out free DVDS featuring &#8220;Sesame Street&#8221; episodes dealing with the subject.

Organizers say the entire tour, unusually long for the USO, is special in itself.

&#8220;This is the first of its kind, specifically designed for children,&#8221; said Glen Taylor, manager for Vee Corporation, which puts on similar &#8220;Sesame Street&#8221; productions in the States.

The tour continues with shows in Naples on Wednesday and Thursday, a trip to Camp Darby on Saturday and two shows in Rota, Spain, on Oct. 24. Then it&#8217;s on to Alaska at the end of the year. Another tour is set to feature multiple stops in the Pacific in January and February.