Buy Photo
Afghan members of an elite police special forces unit in Herat gather for a drill prior to a raid to nab a Taliban leader Oct. 28, 2018. (J.P. Lawrence / Stars and Stripes)

Buy Photo
Afghan members of an elite police special forces unit in Herat gather for a drill prior to a raid to nab a Taliban leader Oct. 28, 2018. (J.P. Lawrence / Stars and Stripes) 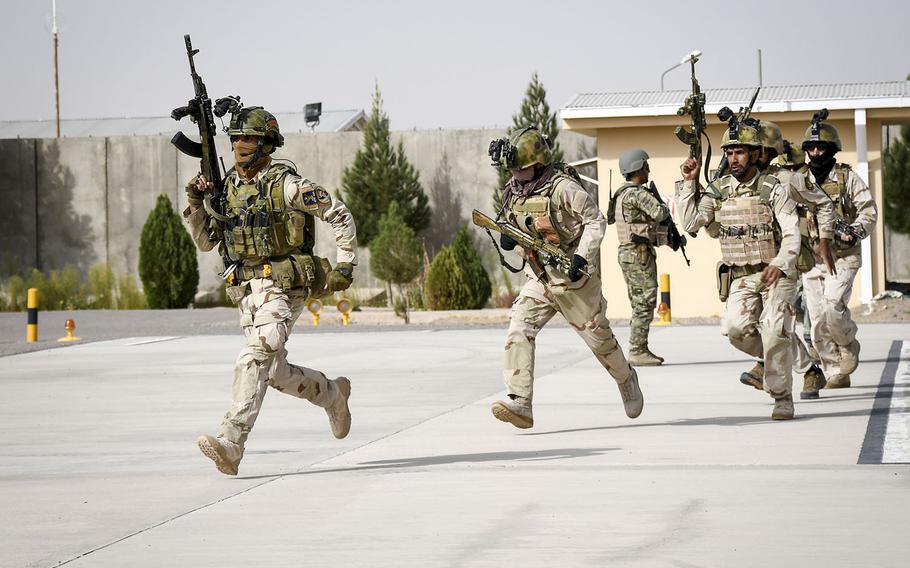 Buy Photo
A sergeant in an elite Afghan police special forces unit in Herat leads the charge toward waiting Humvees during a prep drill for a raid to nab a Taliban leader Oct. 28, 2018. (J.P. Lawrence / Stars and Stripes) Buy Photo
Afghan members of an elite police special forces unit in Herat prepare their vehicles during a drill prior to a raid to nab a Taliban leader Oct. 28, 2018. The new unit is one of six National Mission Units, who are better equipped and trained than normal Afghan police units. (J.P. Lawrence / Stars and Stripes) 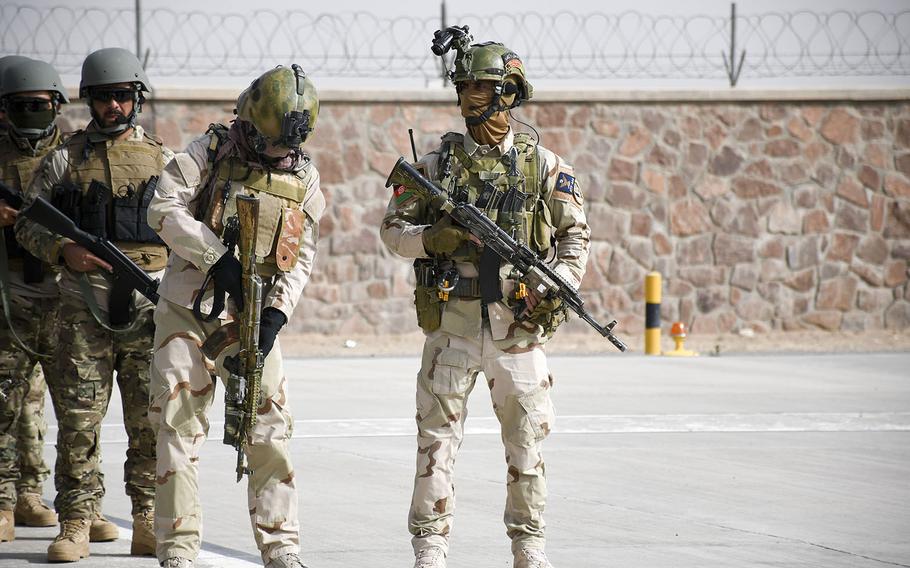 Buy Photo
A sergeant in an elite Afghan police special forces unit in Herat preps his men before a raid to nab a Taliban leader Oct. 28, 2018. (J.P. Lawrence / Stars and Stripes)

HERAT, Afghanistan — Masked, armed and in full combat kit, the Afghan paramilitary policemen raced to a line of idling Humvees at their outpost near Afghanistan’s western border with Iran.

After scrambling into their gun turrets and checking their gear, the policemen rumbled off as part of preparations to arrest a Taliban commander.

The men were part of Herat’s new National Mission Unit, a police force intended for combat missions and advised by NATO instructors. Afghanistan hopes to double the number of crack units such as this one in Herat, a city of about 400,000 and the country’s third-largest.

Some analysts warn, however, that emphasizing development of elite Afghan units to the detriment of common soldiers and police officers may repeat of mistakes made by Western forces throughout the war.

Afghanistan currently has three NMUs taking on high-risk missions, such as arresting terrorists and responding to attacks.

Paramilitary police organizations are characterized by military discipline and tasked with missions that conventional police aren’t trained to handle – and as a result suffer higher casualties, according to a recent Pentagon report.

The unit in Kabul, for example, stormed a compound this August from which nine Islamic State fighters had fired mortar rounds that landed near Afghan President Ashraf Ghani as he was making a speech.

Herat, the largest city in western Afghanistan, was one of three localities chosen to host the new National Mission Units, along with Balkh in the north and Jalalabad in the east.

“The mission of the unit is antiterrorism, counternarcotics and critical response,” said Col. Habibullah Nazari, commander of the Herat unit.

The national units are part of an organization with about 3,500 police officers. A reorganization folded another, larger Afghan police commando unit, the Afghan National Civil Order Police, into the army last year.

Nazari said his men are trained to conduct air assault missions, where they disembark from helicopters and storm an enemy position. They use night vision goggles, grenade launchers, sniper teams and logistical trucks, which conventional police normally lack. He added that a unit of Afghan Mi-17 helicopters will soon deploy in Herat to provide dedicated air support. They also have the benefit of a year of training, both in Herat and at newly furnished training sites in northern Afghanistan.

The Herat unit conducted its first mission last month, Nazari said. It involved an early morning raid to nab a militant, who managed to slip away.

The policemen have been trained by Italians at their base near Herat’s airport. But Nazari said no foreign advisers were involved in the planning of that mission, although a plane from Camp Arena provided surveillance.

Advisers from Italy and Croatia are heavily involved in the training, and U.S. defense contractors are advertising for trainers.

Throughout the 17-year war in Afghanistan, coalition forces have focused much of their training and resources on elite units. But some experts say more and better-trained regular policemen are what’s needed to secure rural areas where the Taliban have been gaining ground.

“High-end forces are easier to train, they’re more educated, they do the sexier offensive missions,” said Seth Jones, a senior adviser at the Center for Strategic and International Studies, a Washington-based think tank. “But they’re not that ‘hold’ force, which are in some ways more important. Because this is where the Afghan government is struggling, to hold territory.”

High-end forces will often clear an area held by insurgents, but once they withdraw the guerrillas will gradually infiltrate back, said Jones, who also served as a plans officer for U.S. Special Operations Forces in Afghanistan.

The conventional Afghan police force is supposed to hold these areas and ensure that insurgents don’t return. But many policemen do not have the training, the equipment or the will to do so.

In Herat, they are also undermanned. Many of the city’s 15 police districts are staffed by just 70 or 80 officers, said Jailani Farhad, the governor’s spokesman. Farhad said these stations do not have enough manpower to police a city of almost 2 million, and bigger than Phoenix, which has about 4,000 police officers and is not in a war zone.

Herat’s provincial government plans to consolidate competent regular police officers into a new 300-member unit. It will be stationed near the governor’s office in a new compound and will have better equipment at its disposal.

The move will drain the best officers from Herat’s other police stations, but if the pilot program increases security and police effectiveness, Herat may be a model for other cities in focusing on the elite few over the regular many.