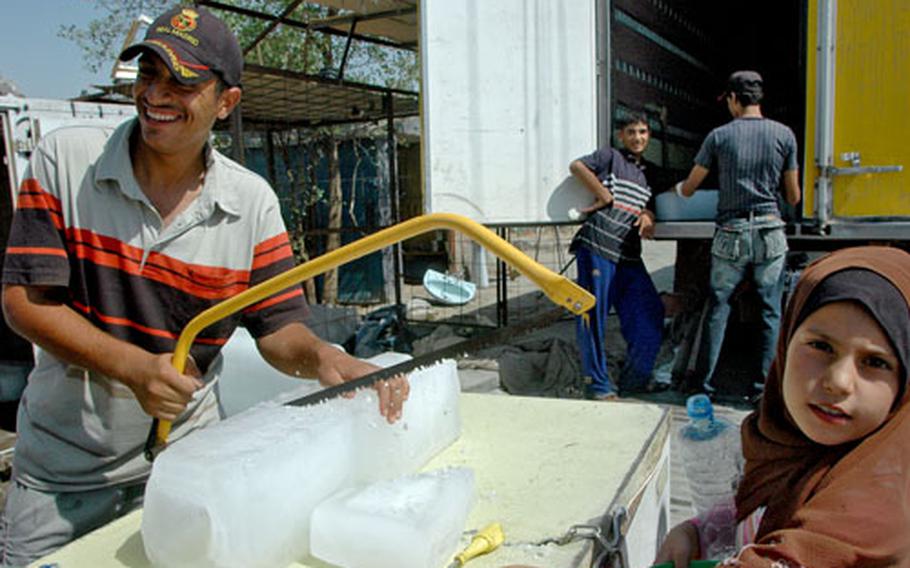 Long hours without electricity have boosted the sales in ice throughout Baghdad, leading vendors to increase the amount of ice made throughout each night. Without electricity, capital citizens can&#39;t run their freezers to make ice, and have resorted to buying in bulk on the streets, multiple times a day. Residents too poor to buy ice go without. (Les Neuhaus / S&S)

Long hours without electricity have boosted the sales in ice throughout Baghdad, leading vendors to increase the amount of ice made throughout each night. Without electricity, capital citizens can&#39;t run their freezers to make ice, and have resorted to buying in bulk on the streets, multiple times a day. Residents too poor to buy ice go without. (Les Neuhaus / S&S) 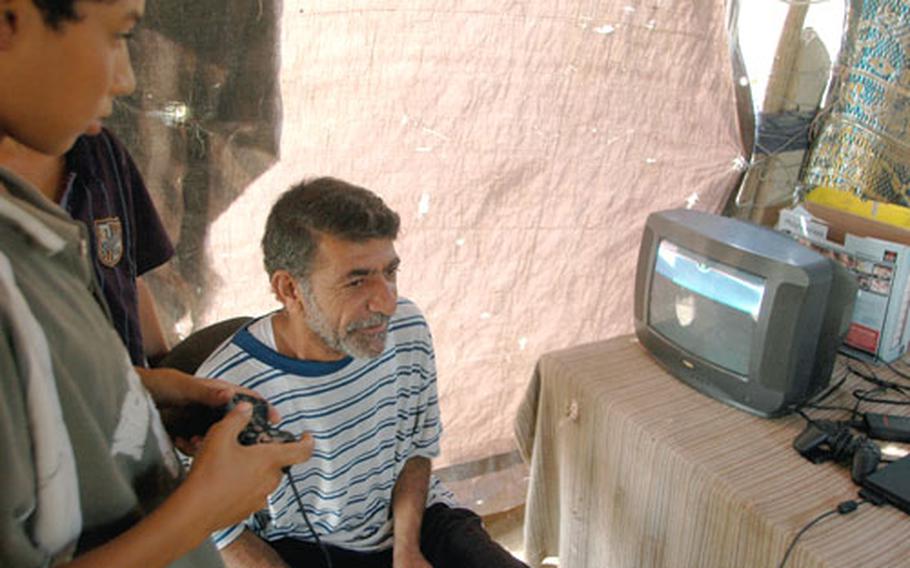 Ammar Jason Latif, a poor Iraqi man who lives as a squatter in the Qadisiyah neighborhood of Baghdad, runs a shanty video game center. Kids pay him for the chance to play &#39;Rainbow Six,&#39; a PlayStation game. The power to operate the game is supplied via illegal taps into the main power sources of the neighborhood, according to U.S. soldiers who patrol the area. (Les Neuhaus / S&S) 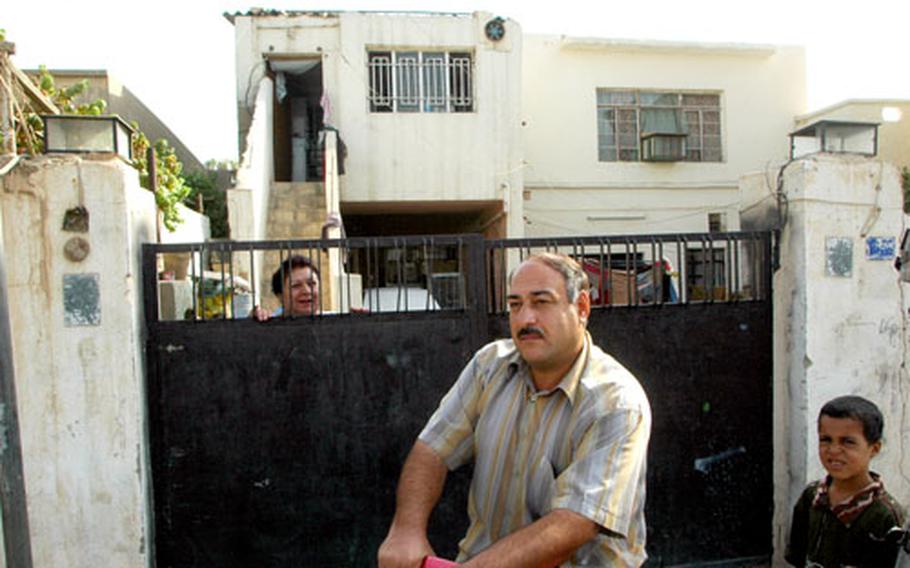 Taraq Abd Alrazaq, center, sits in front of his house in the Qadisiyah neighborhood in Baghdad. He complained to U.S. soliders from the 3rd Battalion, 82nd Field Artillery Regiment patrolling his street on Tuesday that he had only received one hour of government-supplied electricity in the last seven days. (Les Neuhaus / S&S) 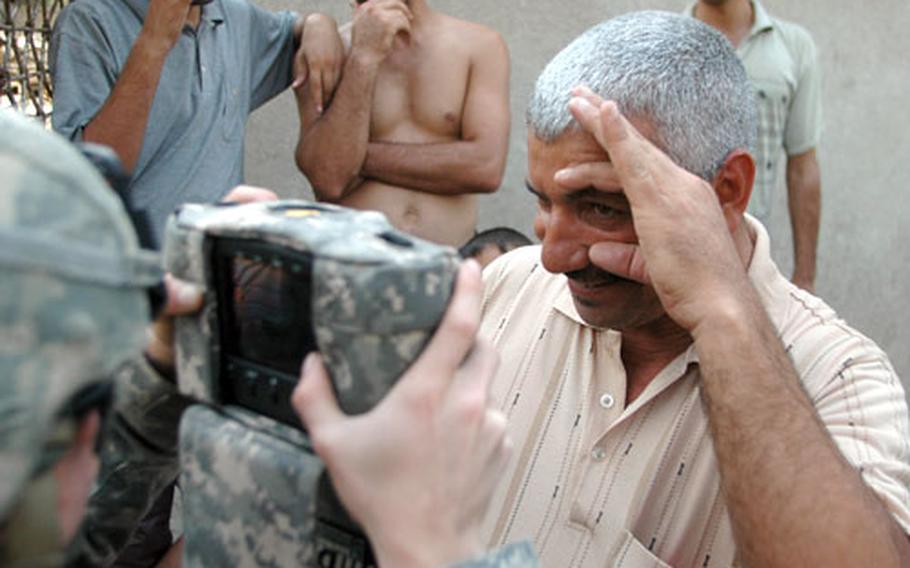 U.S. troops scan the retina of the owner of a motorized generator in the affluent Sunni neighborhood of Qadisiyah, Baghdad. Troops have a plan to help pay for fuel costs to enable area residents to run the generators for longer hours. Throughout Iraq, troops have done retinal scans and collected information on civilians. (Les Neuhaus / S&S) 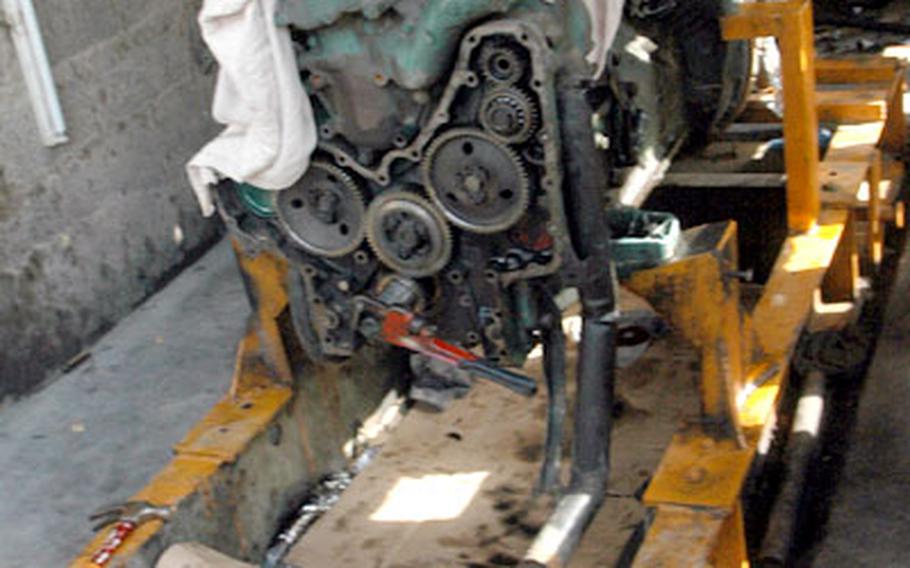 A broken generator sits in the Qadisiyah neighborhood of Baghdad. Members of the 3rd Battalion, 82nd Field Artillery Regiment plan to install a one-megawatt generator to help residents of the neighborhood cope with the constant lack of power. (Les Neuhaus / S&S)

The soldiers of the 1st Cavalry&#8217;s 2nd Brigade who patrol the central Baghdad neighborhood of Qadisiyah don&#8217;t have an answer satisfying to Alrazaq. And though the troops work hard to ensure security, war-weary citizens want simple electricity.

&#8220;We have only had one hour of electricity in the last seven days,&#8221; Alrazaq said on Tuesday morning as he prepared for work. He said he works for the state power company, issuing bills.

Although generators of various ages and types adorn the corners and curbs in this mostly upper- class Sunni neighborhood bordering the Green Zone, continuous power is still a dream for the capital&#8217;s more than seven million people. On Tuesday and Wednesday, as troops conducted routine patrols, they heard an earful from residents.

Security, they realize, is not people&#8217;s only priority.

U.S. Army Capt. Todd Martin has heard it before. Normally he and his men, with the 3rd Battalion, 82nd Field Artillery Regiment, would be loading and firing 155 mm Paladin howitzers, but not here in Baghdad.

Martin said the toughest part of his job is trying to make Iraqis understand that his unit wants to help them. But some don&#8217;t want the help.

Military officials say efforts are under way to help people like Sa&#8217;adui.

But on July 30, the congressionally appointed special inspector general for Iraqi reconstruction, Stuart Bowen Jr., said rebuilding efforts countrywide were hobbled by corruption, deception and an inability to fulfill follow-up maintenance by Iraqi contractors and government officials, all of which amounted to a &#8220;second insurgency.&#8221;

The men of the field artillery regiment aren&#8217;t swayed by outside issues. They want to help out residents in their own area of operation, one megawatt at a time.

According to 1st Lt. Jesse Wood, a civil military operations officer, plans to install a one- megawatt generator are already in the works, paid for by the artillery unit&#8217;s funds.

Wood said Qadisiyah needed about six megawatts to be up and running with consistent electricity, which might seem like a drop in the bucket to some.

But something&#8217;s better than nothing, said residents. Some projects meant to provide millions with power never got off the ground.[/BODY]

For example, Bowen cited in his July quarterly report to Congress the Dora power plant, located in Baghdad. It had been fixed up at a cost of more than $90 million with American taxpayer money. Once turned over to the Iraqis, the entire facility fell into poor condition, he said.

Prewar levels hovered around 4,500 megawatts for the entire country, according to his report, with the capital consuming the lion&#8217;s share. By July of this year, the country&#8217;s output stood at 4,230 megawatts, which he said was an improvement from the 3,800 megawatt output that existed in late 2006.

In the case of Qadisiyah, said Wood, the Iraqi government will provide 25 percent of fuel costs, while the residents will have to co-opt the rest to keep the pending one-megawatt generator running.

It could help. Residents are reluctant to dole out spare cash for fuel to run generators on their blocks that turn out in many cases to be high maintenance and unreliable. Qualified mechanics are in short supply.

The streets are littered with broken generators rigged with motor engines or anything else that might have kept them going, but in the end, the jury-rigging mostly helps accelerate their demise, said residents and military officials.

Even the area medical facility, Yarmouk Hospital, once the main casualty center for Baghdad before the war, has trouble keeping electricity going, according to the battalion&#8217;s commander, Lt. Col. Mike Tarsa.

The hospital keeps generators on hand as well.

Some residents have their own small generators, but all said the government needs to do something.

But Alrazaq and his family are skeptical.

And as for American forces handling security?

&#8220;Sure, the area is safer than most in Baghdad, but what is safety when we have little water or electricity?&#8221; Alrazaq said.

Struggle for power keeps lights out

Armed militias have taken control of many of the switching stations that regulate the flow of electricity throughout the country, an Iraqi official said Wednesday.

At a news briefing with U.S. military officials, electricity minister Karim Wahid said the armed groups have effectively been able to keep certain areas of Iraq without electrical power.

Wahid&#8217;s remarks were first reported by The New York Times on Thursday.

&#8220;The development adds to existing electricity problems in Baghdad, which has been struggling to provide power for more than a few hours a day because insurgents regularly blow up the towers that carry power lines into the city,&#8221; the Times reported.

&#8220;Officials have been trying to control the flow of electricity from huge power plants in the south, north and west by calling local officials there and ordering them to physically flip switches. But the officials refuse to follow those orders when the armed groups threaten their lives, [Wahid] said, and the often isolated stations are abandoned at night and easily manipulated by whatever group controls the area.&#8221;

That happened on Aug. 14, when the situation led to a loss of power throughout Baghdad and 60 percent of the rest of the country.