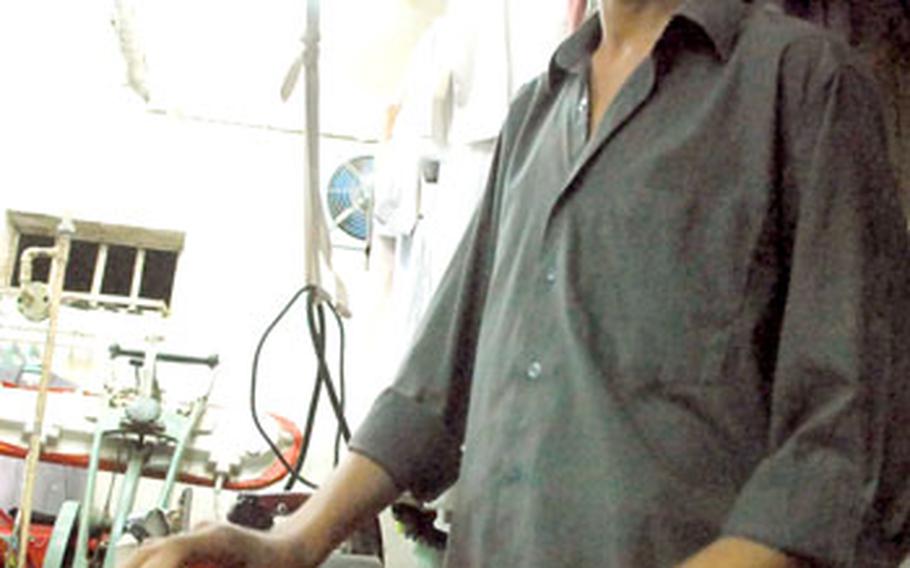 Drdiya Jaber irons a shirt on the last day of Ramadan at the dry cleaners he owns in Baghdad’s Rusafa district. Jaber stayed at work late to take advantage of the few hours of electricity provided by the national power grid. (James Warden / Stripes)

Drdiya Jaber irons a shirt on the last day of Ramadan at the dry cleaners he owns in Baghdad’s Rusafa district. Jaber stayed at work late to take advantage of the few hours of electricity provided by the national power grid. (James Warden / Stripes) 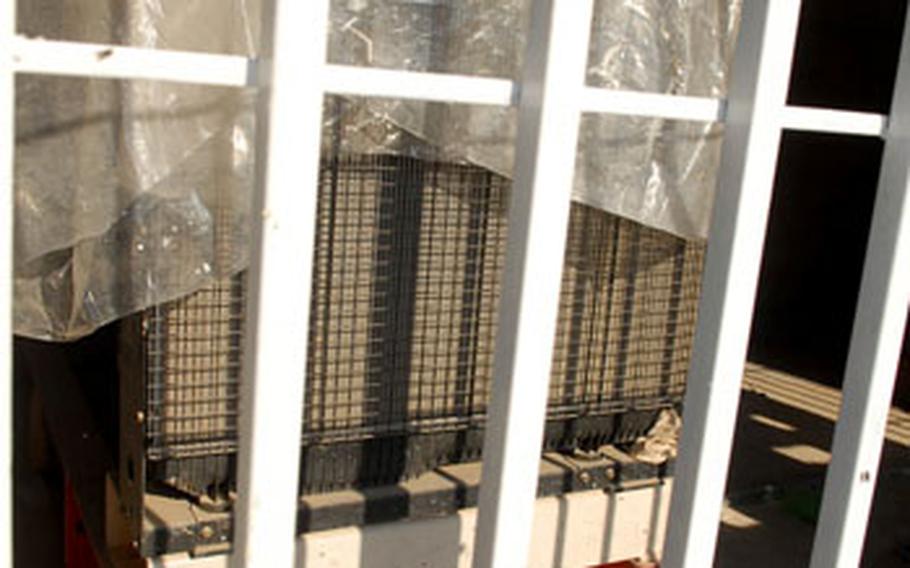 A new generator sits securely behind locked bars in Baghdad’s al-Iskan neighborhood. American units are training Iraqis, many of whom are “Sons of Iraq” members, on how to maintain the generators so that the equipment can function without continued American help. (James Warden / S&S) 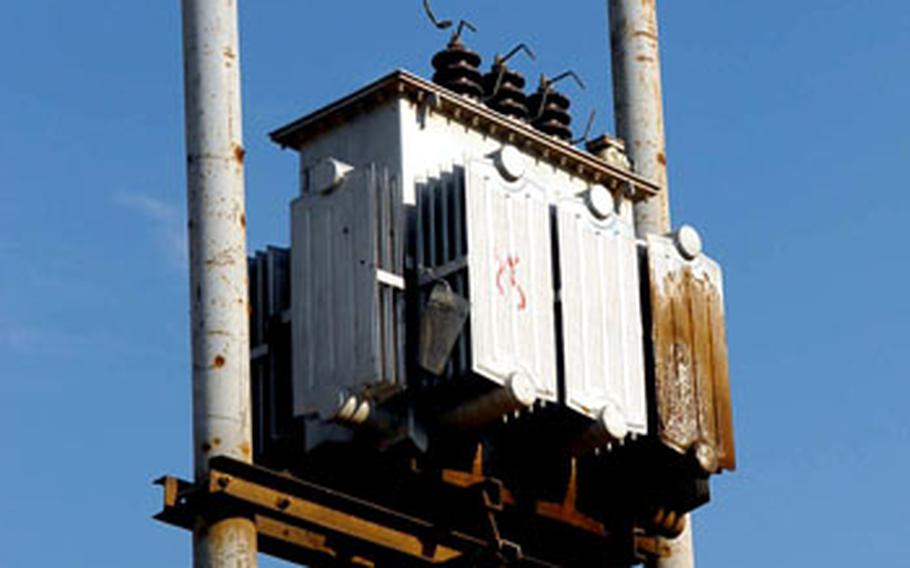 A four-month-old transformer sits idle on a rusty power pole in Baghdad’s al-Iskan neighborhood. Workers have yet to connect it to the power grid. (James Warden / S&S)

EDITOR&#39;S NOTE: Iraqis and Americans make do with generators, a temporary, inadequate solution. This is the first of a two-day series on the country&#8217;s power woes and alternatives. Tomorrow: Enterprising locals have, indeed, tried to make money off the shortages.

BAGHDAD &#8212; With Iraq&#8217;s power grid still broken five years after the war began, unassuming huts like the one in Baghdad&#8217;s al-Iskan area are being called on to save the day.

The structure is only slightly larger than a shed and tucked away in a corner of al-Iskan. Prison-grade locks seal the building&#8217;s iron gates. Behind these bars sits a 350 kVA generator so new that the plastic still rests on top of the Beetle-sized machine.

Just a softball pitch away, it&#8217;s clear why the building&#8217;s contents are so protected. Brand new transformers sit on rusty poles &#8212; idle four months after their installation because no one bothered to connect them to the power grid. Nearby, power lines sag to the ground or are missing altogether &#8212; not that it matters much because not enough electricity flows through those lines anyway.

American leaders are looking to generators to buy some time until the country can produce enough electricity to overcome persistent power shortages, probably the No. 1 complaint among Iraqis.

Multi-National Division&#8212;Baghdad didn&#8217;t have an exact tally of the number of generators being installed. But 1st Brigade Combat Team, 4th Infantry Division &#8212; which controls the Rashid security district, including al-Iskan &#8212; has already installed 27 generators and is installing 62 more. In all, the United States&#8217; "microgeneration" and power renovation efforts in Baghdad run close to $23 million, according to officials.

This American-funded solution comes at a time when commanders are swiftly shutting off the flood of U.S. dollars that once bankrolled Iraq&#8217;s development. In almost every arena but electricity, soldiers are outright refusing to fund local projects, preferring to use Iraqi money even if American leaders must manage that money.

Yet Iraq&#8217;s Ministry of Electricity has shown only a limited ability to meet its citizens&#8217; power demands.

Maj. Timothy "T.J." Reed, the 1/4 BCT civil affairs officer, said Americans began installing generators because the ministry didn&#8217;t have a plan, but does have a long-standing culture that puts more emphasis on saving money than on funding critical expansions. The ministry is also busy with the admittedly difficult work of rebuilding Iraq&#8217;s permanent electrical infrastructure.

But the neglect is also consistent with the Iraqi government&#8217;s continued inability to push money down to the local level &#8212; at least, not without American help. Soldiers and civilians across the country frequently curse the central government&#8217;s impotence, and whole programs have been created to allow American project managers to shepherd local projects through Iraq&#8217;s own government. The Ministry of Electricity is no exception.

The country did pretty well until the Iran-Iraq War of the 1980s, he said. That war hurt the power grid some, but it was the embargo that followed the first Gulf War that really crippled the system. American troops inherited infrastructure that had seen about a decade of neglect by the time they invaded in 2003.

To compound the problem, Iraqis rushed out to buy masses of cheap electrical appliances that they had been unable to obtain during the prewar years. This increased demand on an already fragile system.

Meanwhile, it takes a minimum of three years to design and build a modest-sized plant.

"Whatever they are trying to do &#8212; I&#8217;m not saying they are not doing a lot, they are &#8212; you cannot build a new system in five years unless you have a very secure country in which foreign companies can move freely," al-Khazraji said.

Notwithstanding these difficulties, power on the national grid has crept up to about six to eight hours a day for many Iraqis, although the increased demand from air conditioning and fans in the summer can drop that to under two hours in some areas.

Nowhere is the progress clearer than in the air, where Baghdad&#8217;s streets appear noticeably brighter than they were at the beginning of the year. Yet that still leaves most Iraqis without power for the majority of the day even as much of their electricity still comes from temporary fixes like generators.

The availability of power also varies from neighborhood to neighborhood, and that can create the perception of sectarianism &#8212; or at least favoritism &#8212; in a country still reeling from a brutal sectarian conflict.

The power shortages hurt the same businesses that American leaders are working so hard to develop. The last day of Ramadan is a major holiday, but Drdiya Jaber was busy ironing shirt after shirt well past 7 p.m. on Sept. 30 in the sweltering dry cleaners he owns in Baghdad&#8217;s Rusafa district, an area outside 1/4 BCT&#8217;s area of operations.

At the time, Jaber&#8217;s neighborhood was getting just one hour of power for every four hours it was off. His personal generator costs him about 800,000 dinars, or about $700 a month to run. So it was important to take advantage of the free national power &#8212; even if that meant ironing shirts while his neighbors were feasting.

"When we get power, we work," Jaber said.

The situation also prompts many Iraqis to adopt measures that just make matters worse. Residents often run spidery thin wires from a power source into their homes. These create unsightly rats&#8217; nests and low-hanging wires that towering American vehicles inadvertently tear down while on patrol, sometimes giving the gunner a bad shock.

The ensuing power outages upset the same residents who the soldiers are trying to win over. The thin wires also don&#8217;t carry power as efficiently as real power lines, and many of them illegally tap into power that is meant to go somewhere else.

All this degrades an already stressed system.