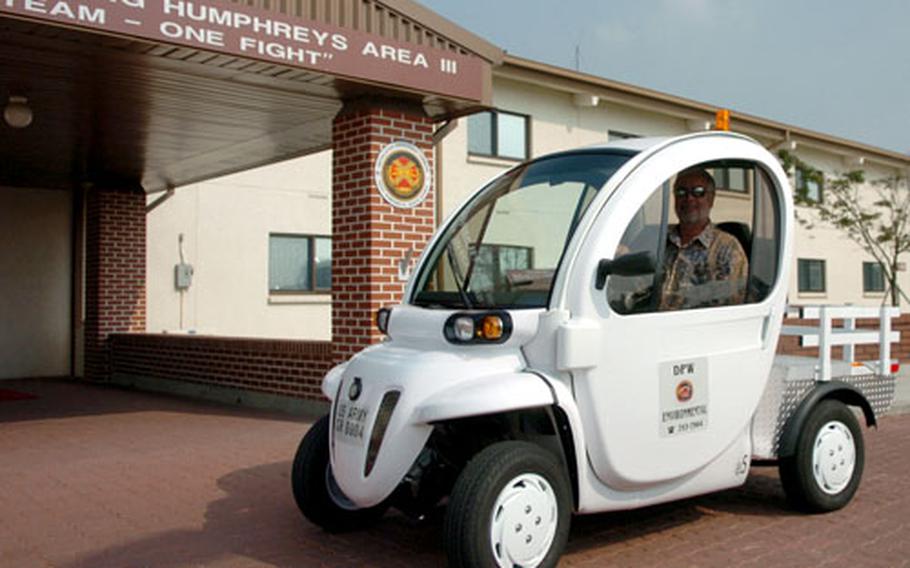 &#8220;There&#8217;s a plug on the front end of the vehicle and you plug the other end into&#8221; a 110-volt outlet to recharge the battery, Johnson said. Recharge takes six to eight hours, according to the manufacturer&#8217;s literature.

The GEMs can go up to 30 miles on a charge and have a top speed of 25 mph, according to the literature. There are no tailpipe emissions.

Johnson&#8217;s division bought four of them, and they went into service about two months ago.

Johnson and his staff use them to get to things like environmental compliance inspections, water sampling, meetings and other on-post &#8220;administrative&#8221; tasks.

They later &#8220;loaned&#8221; one of the four to the directorate of logistics, whose responsibilities include oversight of transportation and vehicles at the post.

That in turn will free up a lot of the regular gas-powered sedans and other nontactical vehicles Humphreys needs for other driving tasks, Johnson said.

To keep the cars ready to roll, officials will look at installing chargers at key parking spots around post.

Johnson says the cars are a &#8220;good conversation piece.&#8221; They often draw questions from soldiers and others.

That&#8217;s given the cars the added role of &#8220;an environmental awareness type tool for my division,&#8221; Johnson said. &#8220;Everybody who sees us driving it sees that my division is doing everything they can to reduce energy and protect the environment.