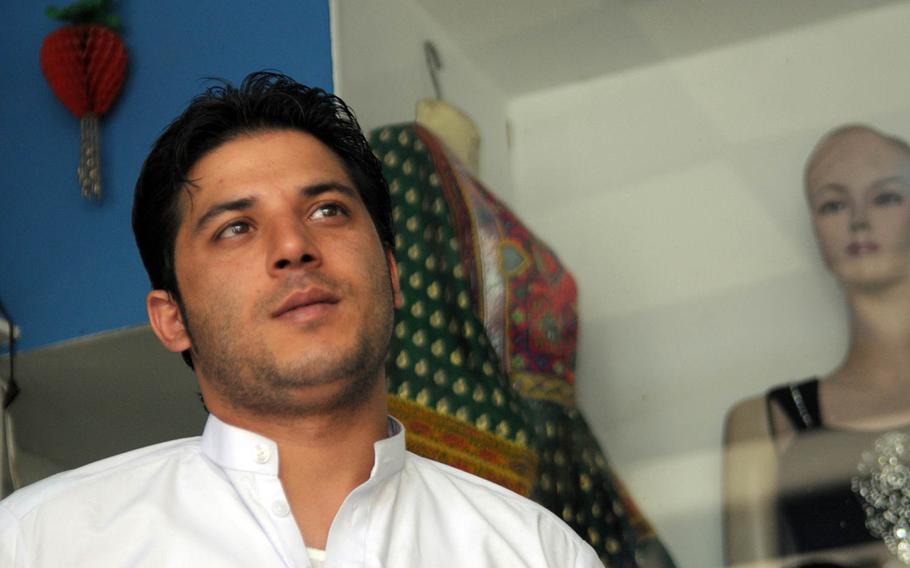 Emal Hamidzada, 26, owner of a dress shop in central Kabul, said customers are reluctant to spend money in Afghanistan's current climate of political uncertainty. "If I told you there was no business, I'd be lying," he said. "It's next to nothing." (Steven Beardsley/Stars and Stripes)

KABUL, Afghanistan — It’s wedding season here, but the colorful dresses in Emal Hamidzada’s small shop in central Kabul are on deep discount. Purchases have fallen off in recent months, he said, despite his efforts to tempt customers.

Small businesses and large investors alike have been hit hard in Afghanistan as spending remains tight amid uncertainty over the country’s future. The approaching withdrawal of NATO combat forces and the unclear status of foreign military assistance going forward — and whether aid agencies will stay if foreign troops go — have led many Afghans to reconsider purchases like dresses and new cars and keep their money within close reach.

Now an election impasse and the growing tensions surrounding it are adding to the hesitation, according to merchants like Hamidzada and business leaders. The drop in business suggests that whatever government eventually assumes office could face an economic crisis in addition to political and military crises, raising further questions about the legacy left by U.S. intervention in the country.

“This kind of election should not affect businesses like it has,” Hashem Rasouli, a spokesman for the Afghanistan Chamber of Commerce and Industries, said. “But Afghan people have a very bad and very negative experience from the past.”

A July survey conducted by the chamber found that many businesses had closed or downsized, paring employees by 10 percent compared to the previous survey in March. The overall business climate — a measure of business owner feelings about their current situation and the outlook for the next six months — fell dramatically in every region.

The survey, given out across the country, coincided with Afghanistan’s annual fighting season, which begins in spring and runs through summer. It also came as one of the presidential candidates protested early results from the June 14 presidential runoff election, drawing fears of unrest.

Foreign and domestic investment fell 2 percent in the first half of 2014 from a similar period in 2013, according to Rohullah Ishrat Ahmadzai, a spokesman for the Afghanistan Investment Support Agency. The drop, which Ahmadzai said paralleled the election process beginning in 2014, follows a 26 percent increase in investment between the first halves of 2012 and 2013, he said.

Delegations of foreign business owners have stopped coming to Afghanistan as they wait out the current crisis, Ahmadzai said. And, Afghan business delegations have likewise stopped looking at business opportunities abroad.

“The investors are waiting on the situation,” Ahmadzai said. “And if they see a positive change, or the election is peacefully resolved, then we have (plans) to support them and encourage them to invest.”

As it is, Afghanistan is able to raise very little of its own revenue, with foreign donations accounting for roughly 90 percent of its annual budget, including most of the salaries for the army and police. Income from customs is a major part of the country’s domestic revenue, yet it has regularly fallen below the expectations of international donors due to corruption and inefficiency.

Under the Tokyo Framework adopted by international donors two years ago, Afghanistan agreed to raise its revenue collection from 11 percent of its gross domestic product in 2012 to 15 percent in 2016. But last year, revenues accounted for only 9.5 percent of GDP, according to the International Monetary Fund.

Jaillani said the election season could account for an additional 15 percent to 20 percent loss in customs, expanding the existing revenue shortfall.

“If the election process takes longer, three months from now we will start being concerned with how to pay government employees,” Jaillani said Sunday.

Afghan government representatives have already briefed State Department officials on the revenue shortfall, according to an emailed statement from a U.S. Embassy official. Reasons for the gap vary, according to the statement, “including the economic downturn, poor revenue collection, and weak budgeting capacity, and may be compounded by the ongoing political situation.”

The economy is one of many pressures on rival presidential candidates Ashraf Ghani and Abdullah Abdullah to resolve an audit from June’s runoff vote and form a joint government. Agreements to keep foreign military forces in the country must be signed soon, U.S. and NATO leaders have warned, if a follow-on military mission is to remain next year.

Civil unrest also remains a possibility if either campaign believes the process is flawed. Both candidates have pledged to sign if elected.

Rasouli said many Afghans remember the financial impact of the civil war in the 1990s, when sudden unrest in Kabul left them little time to get their money from the banks and escape the country.

“People think perhaps Afghanistan will face tough conditions and all this will begin again,” he said.

Hamidzada, the dress shop owner, said he spent $10,000 remodeling his property last year, assuming he would make his money back in the next year. He hasn’t, he said, and he is now holding off on buying a car.

“Definitely in this kind of situation you don’t want to spend a lot of money,” he said. “If you want to borrow money, you can’t be sure someone will lend.”

A peaceful transition to a new government could help boost flagging numbers, Ahmadzai, at AISA, said. When Secretary of State John Kerry first visited Kabul in July to broker a deal between the two presidential candidates, Afghanistan’s currency, the afghani, improved against the dollar, Ahmadzai said.

“It gave a kind of psychological boost to investors,” he said.

Yet problems continue to dog the effort to declare a winner. The candidates have created a 30-member joint committee to flesh out details of a new government, but the two sides appear far apart on the role and authority of the new structures.

The election audit also remains behind schedule due to challenges by the candidates’ representatives. The audit was supposed to be finished in time for the NATO summit Sept. 4-5 in Wales.

As of Tuesday evening, auditors had finished only 53 percent of the nearly 23,000 ballot boxes from the runoff election.

“We can’t give a guarantee of when it will finish,” said IEC spokesman Noor Mohammad Noor.