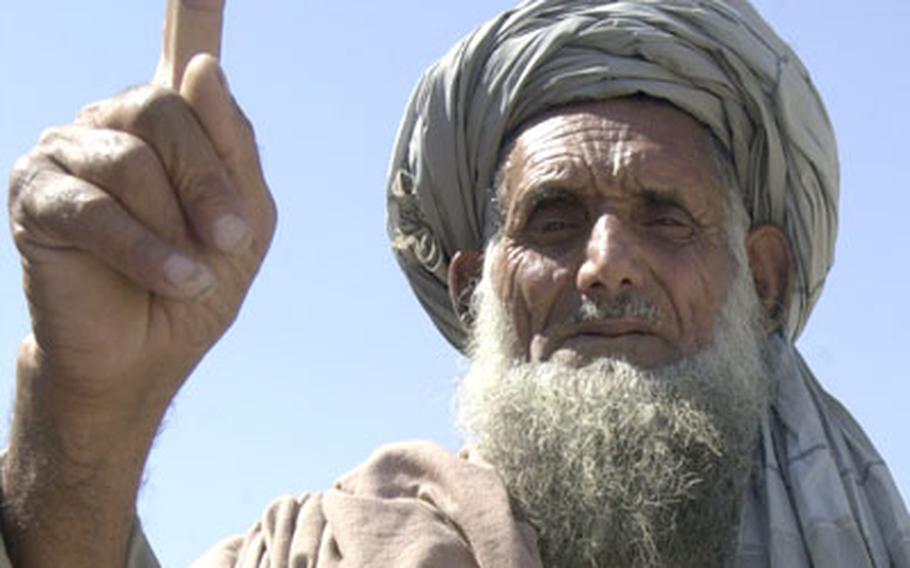 Buy Photo
In this 2011 file photo, an Afghan villager near Mehtar Lam displays an ink-stained finger, indicating that he voted. (Steve Mraz/Stars and Stripes, file )

Aside from three rockets fired at a platoon of Marines &#8212; no one was injured &#8212; and an attack on Afghan National Army troops, the parliamentary and provincial council election went smoothly in Laghman province, which is located between the Afghan cities of Kabul and Jalalabad.

Initially, fears were that insurgents would attack polling sites on election day, but a Taliban spokesman announced in late August that insurgents would not target the sites. A few candidates were killed in the months before Sunday&#8217;s election, but the event itself transpired without major violence.

Safi spoke with Afghan President Hamid Karzai on Sunday evening and said that Karzai also was &#8220;very happy&#8221; with the election.

Abdul Salam, a 33-year-old government worker, said he noticed more people voting this year than in the October 2004 presidential election.

U.S. Army translator Sayed Saleh heard much of the same from those who voted in Matin, a small village north of Mehtar Lam. Three busloads of people from the village of 20 families participated in Sunday&#8217;s election.

Sunday&#8217;s elections marked the final step of the Bonn agreement. The Bonn agreement, a plan to establish an Afghan government, was drafted by Afghan groups at a United Nations-organized gathering in Germany after the Taliban were removed from power in late 2001.

In January, United Nations officials, Afghan allies and aid donors are to meet in London to formulate a five-year plan for the worn-torn country.

The vote helped buoy the spirits of a country that has known little more than war for the past 25 years.

When asked if he was so optimistic because he worked for the government, Salam offered a quick reply.