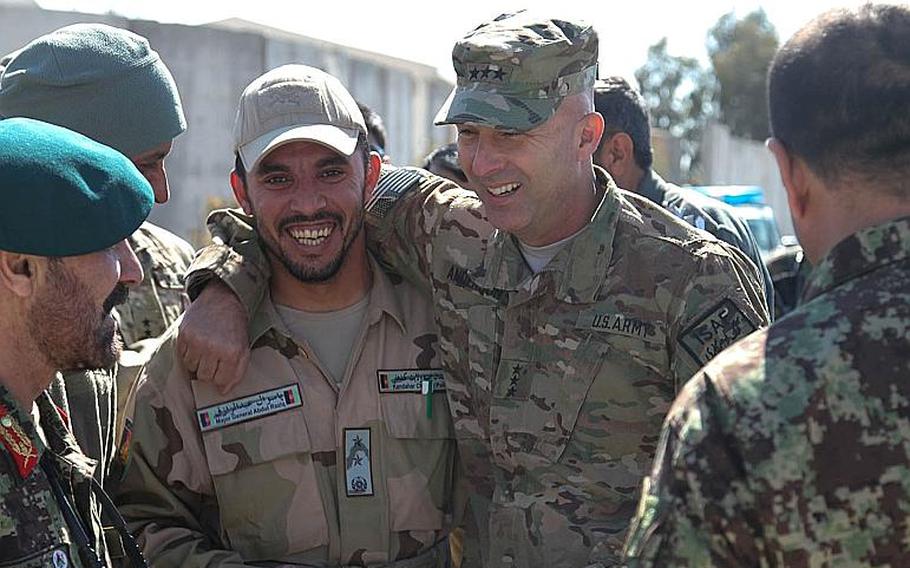 KABUL, Afghanistan — Parliamentary elections in Afghanistan’s Kandahar province will be delayed, officials said Friday following an attack the day before that killed a famous police chief and may have targeted America’s top commander in the country.

Afghanistan’s election commission insisted the one-week postponement was not due to security concerns.

“Because of the tragic incident people cannot go and vote, they have to mourn,” said Zabihullah Sadaat, deputy spokesman for the election commission. “That’s why the election has been delayed.”

A gunman opened fire inside the governor’s compound following a meeting attended by Gen. Scott Miller, the head of U.S. and NATO forces in Afghanistan.

Miller was uninjured in the attack, according to NATO’s Resolute Support mission. But Kandahar governor Zalmai Wesa, two Americans — a servicemember and a civilian — and a contractor from a coalition country were injured and evacuated for medical treatment.

Some experts say the postponement of elections in Kandahar could be one of the first repercussions, some potentially much more serious, to result from the shooting — one of the most significant attacks on senior officials in the 17-year war.

Raziq was a popular and effective commander who, although accused of human rights abuses, was vital in countering Taliban infiltration in Kandahar province, the birthplace of the movement, Afghan military officials said. Some analysts fear his absence could lead to a sharp deterioration in security throughout southern Afghanistan.

Not only are insurgents now likely to start attacking districts that Raziq’s forces had secured, but warlords and other local strongmen suppressed by Raziq could become more active, said Intizar Khadim, an independent political analyst in Kabul.

Neighboring Pakistan too could meddle in Kandahar province, he said.

“The Afghan government and the U.S. are in uncharted waters in the middle of nowhere,” Khadim said.

He said Washington was partly responsible for such security failures.

“The U.S. and Afghan government are two sides of the same coin, Khadim said. “If Afghanistan is failing it’s also a failure of the international community, of their last 17 years in Afghanistan.”

Roughly 500 people came to pay their last respects to Raziq at the governor’s compound before his funeral on Friday, including parliamentarian Khalid Pashtoon, who described a calm scene in a telephone interview with Stars and Stripes. People were very sad but also worried, he said.

“Important people lost their lives and the people are wondering why the government and security forces are so weak,” Pashtoon said. “People across the country have lost trust in their own security.”

Most of the more than $120 billion that the U.S. has given Afghanistan for reconstruction over the course of the conflict has gone to develop the country’s security forces.

Thursday’s attacks will likely provide a major moral boost for the Taliban, who already control or contest about half of the country’s districts, according to U.S. military data.

The insurgents said in a statement that Miller and Raziq were both targets. However, U.S. officials working with the NATO mission described the shooting — which Afghan officials say was carried out by a bodyguard of governor Wesa — as an “Afghan-on-Afghan incident,” implying Miller and the other injured foreigners happened to be in the wrong place at the wrong time.

Shazar Shafqat, a counterterrorism and security analysts based in Pakistan, called the coalition assessment “delusional.”

“The Kandahar attack ... is far from an Afghan-on-Afghan incident,” Shafqat said. “The message from the Taliban has been loud and clear for the past few months. This is how the insurgents operate, and this is what the U.S. military needs to decode and decipher.”

Shafqat said the insurgents may try to use attacks like the one in Kandahar to try to gain leverage in any future peace talks.

The U.S. envoy for Afghanistan, Zalmay Khalilzad, met with Taliban leaders earlier this month to discuss the conflict and ways of ending it, according to Taliban leaders.

“So, now, the Taliban will call for peace talks and political maneuverings, while conceptualizing other hit-and-run sort of attacks at the same time,” Shafqat said. “It’s up to the U.S. officials to not fall into the trap.”