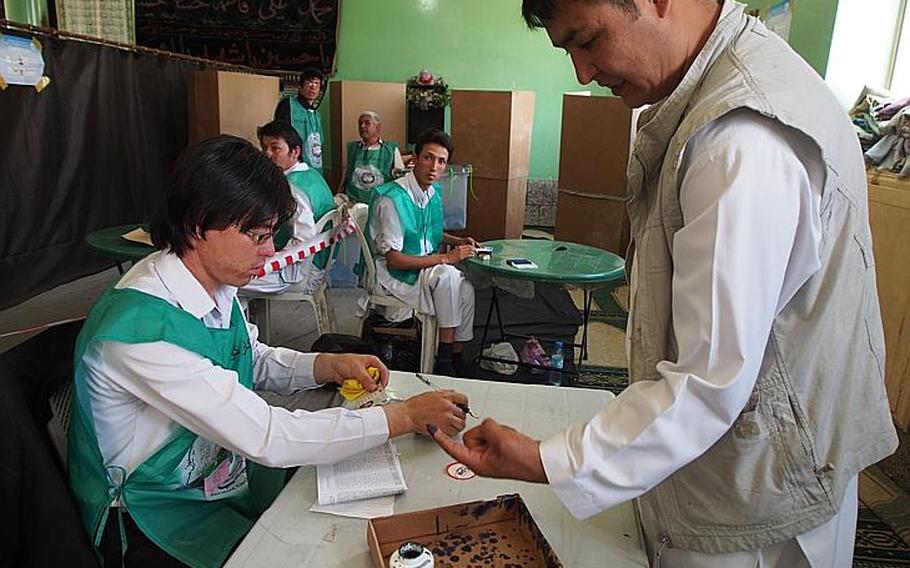 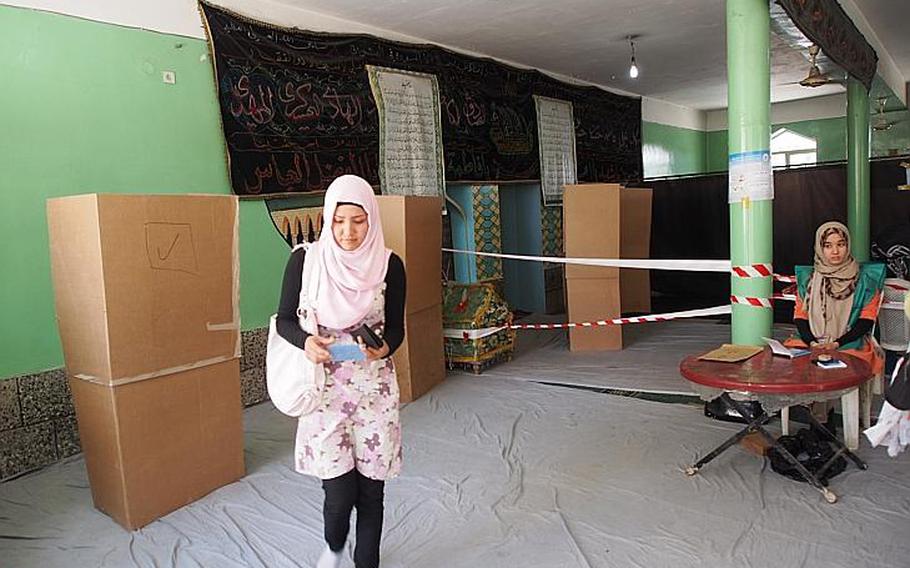 An Afghan woman walks from a voting booth in Kabul during Saturday's historic Afghan presidential election. Deaths among both civilians and Afghan troops were much higher during Saturday's voting than during the first round of the election, in contrast to what Afghan officials initially reported. Heath Druzin/Stars and Stripes (Heath Druzin/Stars and Stripes)

KABUL — Afghanistan’s election was much more violent and deadly than authorities initially admitted, with more than three times the number of attacks originally reported, according to defense ministry figures released on Sunday.

On Saturday, when millions of Afghans went to the polls to vote in the final round of the country’s presidential election, the Interior Ministry reported just 150 attacks, presenting this as a significant drop from the more than 600 insurgent attacks recorded during the first round of elections on April 5.

But on Sunday, Defense Ministry spokesman Gen. Mohammad Zahir Azimi said there had actually been 506 attacks across the country.

While the number of attacks were down from the first round of voting, they were also deadlier.

Thirty-three civilians were killed and 63 wounded across the country, four times the number of civilian deaths reported in the April election, Azimi said. Eleven people, including several election workers and a child, were killed in a single blast in Samangan province and in Herat province eleven voters had their fingers, stained with ink to prevent repeat voting, chopped off by insurgents as punishment for voting.

Security officials now say 29 soldiers and police were killed in clashes on Saturday, along with 176 insurgents.

In Kabul, the morning started with several blasts as rockets hit the city, and a number of voters interviewed said people had been scared away by the threat of violence.

“In the morning we heard two blasts and I think that stopped some people from voting,” said Abdul Khabir, a doctor in Kabul, who waited until afternoon to vote to see if there would be further attacks.

The election, which would mark the first democratic transfer of power in Afghanistan’s history, is key not only to the country’s stability, but also to the legacy of the controversial nearly 13-year international military and reconstruction effort. Former foreign minister Abdullah Abdullah is running against former finance minister Ashraf Ghani to replace President Hamid Karzai, who has ruled the country since shortly after the U.S. military knocked out the ruling Taliban in 2001.

Azimi also painted a grim picture of the challenges faced by the Afghan security forces in the coming years, when they will have much less military support from the NATO-led coalition, which is withdrawing its combat forces at the end of this year.

“As long as the enemy have their support centers outside of Afghanistan for training, planning, and weapons, we will face the same challenges,” he said, referring to Taliban safe-havens in neighboring Pakistan.

The Afghan government and, in many cases, local media, have sought to play down problems with the election in order to bolster faith in the process, often painting a distorted picture of events.

Shortly after polls closed Saturday, the head of Afghanistan’s main election body, Ahamd Yousaf Nuristani, surprised many by saying more than 7 million Afghans had voted, which would mean turnout was higher than the first round. Nuristani, who, like many experts, had predicted lower turnout in the second round, offered no data to back that up and his assertion, and many in people expressed skepticism.

“It was a really unprofessional announcement from the (Independent Election Commission),” said Jandad Spinghar, head of the independent election monitor, Election Watch Organization of Afghanistan.