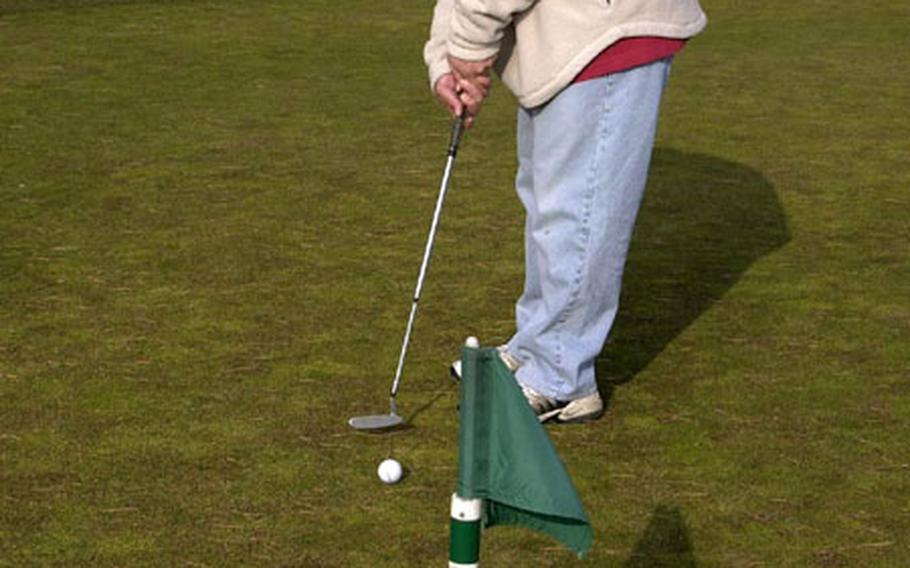 MISAWA AIR BASE, Japan &#8212; When Petty Officer 1st Class Teddy Estella transferred from Sasebo Naval Base in southern Japan to the Misawa Naval Air Facility in northern Japan a few months ago, he knew his golfing days were numbered.

This week, Estella unloaded his golf bag from his trunk and strolled to a green at Gosser Memorial Golf Course, where he practiced his putting.

Unlike last year at this time, when nearly shin-deep snowfall covered the Misawa landscape, winter at this northernmost installation is anything but normal.

It appears, weathermen are saying, to be keeping in line with what has proven to be a year of weather extremes up and down the length of the Japanese archipelago.

When the season&#8217;s first snowfall pelted Yokota Air Base with about 5 inches of snow Dec. 9, Misawa was enjoying a snow-free landscape. A 7-inch snowfall Misawa received in November had long since disappeared, and the base has received only dustings since.

The same day Yokota got hit, snow was recorded in mid-Tokyo for the first time during December since 1991.

Japan Meteorological Agency forecasters released their three-month weather forecast in November and predicted a warmer than usual winter due to the emergence of El Ni&#241;o in the southern hemisphere.

El Ni&#241;o occurs when sea surface temperatures in the equatorial Pacific Ocean remain above average for several months. This usually triggers a chain reaction of atmospheric and weather changes around the globe.

In years past, an El Ni&#241;o event resulted in a milder than normal winter for most of Japan, records indicate.

On Nov. 29, however, the agency made an unusual move. It revised its forecast, the first time that has happened since the agency began making long-term forecasts in 1996.

Based on the likelihood that weather conditions around Japan would be influenced by the Siberian cold front more so than they originally had thought, forecasters hedged their bets and now were predicting &#8220;a normal winter.&#8221;

&#8220;There are strong indications the temperature will rise, but it&#8217;s difficult to explain the causal relationship between one weather phenomenon and another,&#8221; a JMA forecaster was quoted in Japanese newspapers as saying.

None of this weather crystal-ball gazing is fazing Estella as he hones his golf game.

While the ground is bare at Misawa, that&#8217;s not the case in the prefectural capital of Aomori, 45 miles to the northwest. The city received 26.4 inches of snow on Dec. 11, followed by another 20 inches the next day &#8212; new records for both dates, when normal snowfall is 2 and 5 inches, respectively.

In the Hakkoda mountains lying 50 miles west of the air base, skiers and snowboarders alike have been enjoying excellent conditions since early November.

&#8220;I&#8217;ve never seen such an early snowfall,&#8221; said Simon Bernard, cultural liaison for the community of Shimoda near Misawa and a 15-year resident of Japan.

He said he began snowboarding on the upper reaches of the Hakkoda peaks Nov. 3, three weeks earlier than in most years.

On Wednesday, Bernard said snowpack was at least four feet at the top of Mount Tamoyachi, a 4,369-foot-tall peak popular with skiers and boarders from Misawa.

Seiichi Suzuki of Japan&#8217;s Meteorological Research Institute said this year&#8217;s irregular weather patterns are not enough to determine if global weather changes are at play.

Intergovernmental Panel on Climate Change research showed median temperatures over Japan have increased 0.9 centigrade over the past 100 years, possibly caused by increases of carbon dioxide in the air contributing to a greenhouse effect.

According to an official at the Aomori Meteorological Observatory, although temperatures in northern Japan have been warmer than average since Dec. 15, it was colder than the average year prior to that date.

&#8220;So the observatory sees no abnormal weather in the area,&#8221; said the forecaster, who did not want to be named.

&#8212; Hiroshi Chida and Hana Kusumoto contributed to this report.