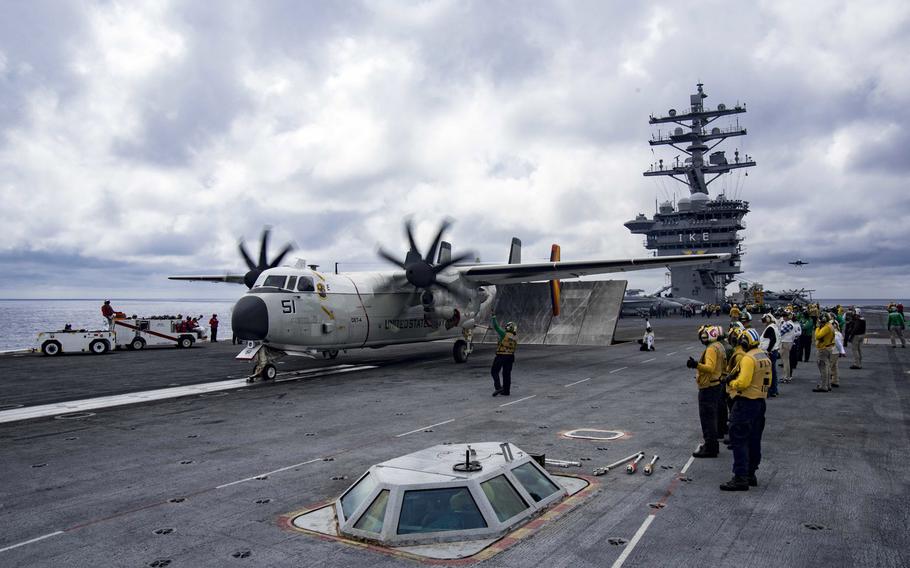 The arrival of the Eisenhower, which comes on the heels of last week’s entrance of the USS Truman Strike Carrier Group in the Mediterranean, adds additional combat options in the fight against the Islamic State group, US. European Command said. The deployment also delivers a message of U.S. commitment to Europe, where a new security environment has sparked a series of enhanced U.S. military efforts to signal a message of deterrence to a more assertive Russia.

“The presence of two carrier strike groups in the Mediterranean Sea demonstrates our commitment to safety and security in the region,” said Lt. Col. Dave Westover, a EUCOM spokesman, in a statement.

“These forces further serve to support European allies and partners, deter potential threats and are capable of conducting operations in support of the counter-ISIL mission,” he said, using an acronym for the Islamic State group.

On Friday, the Truman group entered the Mediterranean and began conducting air strikes against the Islamic State group, which is entrenched in Syria and Iraq. The deployment of carriers in the eastern Mediterranean puts Naval assets in closer proximity to Islamic State strongholds in Syria.

While it remains unclear whether the Eisenhower will join that fight, the deployment will serve as a showcase of the Navy combat reach as part of the service’s “Green Fleet Initiative,” EUCOM said.

“This initiative emphasizes the use of energy conservation measures as a key combat enabler to allow ships to go farther, stay longer and deliver more firepower,” EUCOM said.

Green Fleet operations in Europe will involve a multi-day passing exercise with units from Italy and will showcase energy conservation operations. In addition, the mission will involve a refueling at sea during which an Italian oiler will refuel the strike group ships with advanced alternative fuel,. EUCOM said.

The deployment of the Eisenhower comes amid a surge of military activity in Europe, where large-scale exercises such as BALTOPS in the Baltics and Anakonda 16 in Poland. More than 30,000 U.S. and other western troops are deployed to Anakonda 16 in one of the largest troop movements in Europe since the end of the Cold War.