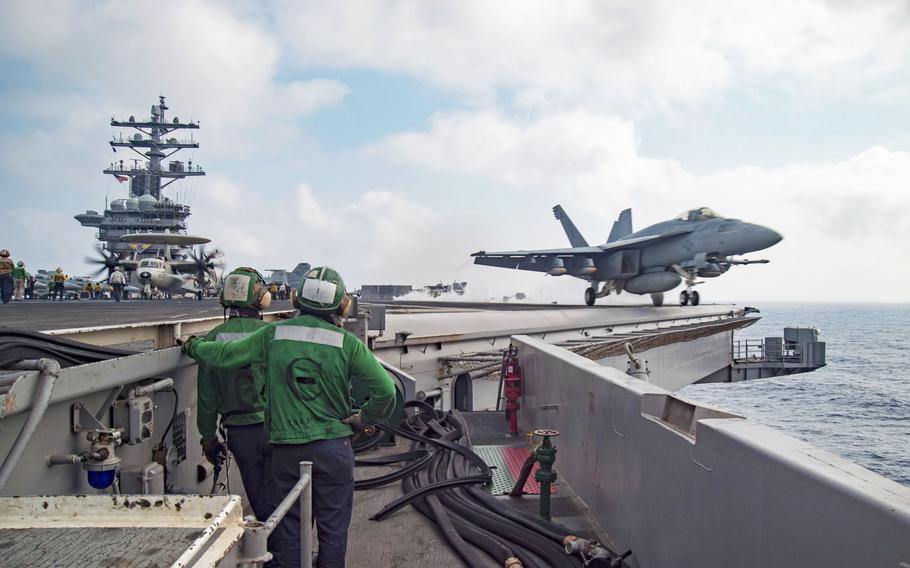 An F/A-18E Super Hornet assigned to the Sidewinders of Strike Fighter Squadron (VFA) 86 launches from the flight deck of the aircraft carrier USS Dwight D. Eisenhower, in the Mediterranean Sea, Tuesday, June 28, 2016. The carrier group has started launching strike missions from the Mediterranean against the Islamic State targets in Iraq and Syria. (Anderson W. Branch/U.S. Navy)

MANAMA, Bahrain — The Dwight D. Eisenhower carrier group has started launching strikes from the Mediterranean against the Islamic State targets in Iraq and Syria, the military said.

Strike group commander Rear Adm. Jesse Wilson said the airstrikes, which began on Sunday, are vital to support counter-terrorism efforts in the region. “Ike CSG brings a flexible, mobile and lethal multimission-capable force to work with our allies and partner nations to eliminate the terrorist group,” he said in a statement released Wednesday.

The Eisenhower’s involvement in the operation is the latest effort by the U.S.-led coalition to accelerate the campaign and keep the pressure on the militants.

The airstrikes come as Iraqi security forces have regained control of Fallujah this week. Media reports said on Thursday that coalition airstrikes killed at least 250 suspected militants and destroyed a large convoy of vehicles.

The momentum is seen as a positive sign as the focus shifts back to the Iraqi city of Mosul, which has been under Islamic State occupation since 2014. Brett McGurk, a special envoy to the coalition against the Islamic State, told the Senate Foreign Relations Committee on Tuesday that the group’s days in Mosul are numbered.

The U.S. Navy has played a central role conducting airstrikes against the Islamic State, including attacks from the USS Harry S. Truman while in the Mediterranean Sea earlier this month. It was the first time a carrier had conducted strikes from there since 2003.

A couple of weeks later, the Navy began combat sorties from the amphibious assault ship USS Boxer from the Persian Gulf, the first time the Navy had used ship-based aircraft from both the Mediterranean and the Persian Gulf at the same time against the Islamic State group.