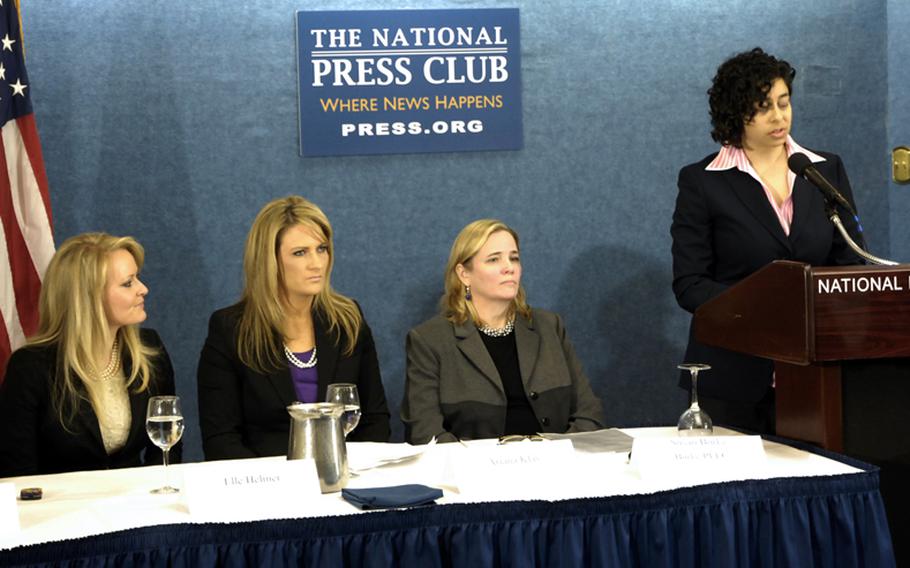 Buy Photo
Left to right, Elle Helmer, Ariana Klay and Susan Burke listen as Anu Bhagwati, executive director of the Service Women's Action Network, speaks during Tuesday's press conference at the National Press Club. Burke is the attorney for Helmer, Klay and others who are suing current and former leadership of the Navy and Marine Corps. (Jennifer Hlad/Stars and Stripes)

It&rsquo;s the second such lawsuit filed accusing the military of fostering a culture of sexual harassment and punishing those who report the abuse.

The lawsuit filed Tuesday alleges that nine current and former secretaries of defense, secretaries of the Navy and commandants of the Marine Corps &ldquo;condoned a culture which allowed sexual harassment, sexual assault and rape&rdquo; and failed to protect the women from those crimes; failed to properly investigate and prosecute offenders; and retaliated against servicemembers who reported being raped, harassed or sexually assaulted.

&ldquo;This is the first time I&rsquo;ve had a voice in six years, so pardon if it&rsquo;s a little wobbly,&rdquo; said Elle Helmer, a former spokeswoman for Marine Barracks Washington and one of two plaintiffs who appeared at a news conference Tuesday at the National Press Club.

&ldquo;I&rsquo;m a statistic, but I&rsquo;m not powerless.&rdquo;

After her hiring in January 2005, Helmer said she was harassed and reported the abuse but nothing changed. In March 2006, she said she was raped by her commanding officer.

For Helmer, the Marine Corps ideal of &ldquo;Never leave a man behind&rdquo; didn&rsquo;t ring true once she reported the rape.

&ldquo;The minute you question the commander or how they do things, you are no longer one of them and they leave you behind,&rdquo; she said.

All eight servicemembers named in the lawsuit said they suffered retaliation after they reported abuse.

Ariana Klay, a U.S. Naval Academy graduate and Iraq veteran, also appeared at the news conference. She was stationed at Marine Barracks Washington four years after Helmer, and said the command had &ldquo;a frat-house culture.&rdquo;

After six months of &ldquo;routinely being called a slut and a whore,&rdquo; enduring verbal and physical sexual advances and false allegations of adultery, Klay reported the abuse. No action was taken, she alleges in the lawsuit; instead, she was told to &ldquo;deal with it.&rdquo; Klay said she was raped in August 2010 by a Marine officer and a former Marine. The officer was court-martialed and convicted of adultery and indecent language &mdash; a process Klay called &ldquo;a farce&rdquo; on Tuesday.

&ldquo;Our constitution forms a system of checks and balances, but I faced the military justice system unchecked,&rdquo; said Klay.

Cynthia O. Smith, a spokeswoman for the department, said she could not comment on the pending litigation but stressed that leaders &ldquo;are committed to doing everything we can to ensure the safety, dignity and well-being of our people.&rdquo;

Panetta has asked for an assessment of how the DOD trains commanding officers and senior enlisted leaders on sexual assault prevention and response, Smith said. That is due in 120 days.

Among them, rule changes that allow servicemembers to quickly transfer units after reporting abuse. In addition, the DoD has allotted nearly $10 million for training IN 2012 to improve investigations and prosecutions

&ldquo;We acknowledge that there are issues, but at the same time we are taking aggressive measures to go after the problem,&rdquo; Little said.